For the third time in the last six months, an Asian restaurant created by white owners with the word “Lucky” in its name has drawn criticism for cultural appropriation or insensitivity.

And now joining them is Lucky Lee’s in New York City. On Monday, the chef and health coach Arielle Haspel opened a what she dubbed a “clean” Chinese restaurant that she said would combine her healthy-eating focus with her love of Chinese-American food. But her opening was quickly dampened by online backlash, with many accusing her of demeaning Chinese food in order to elevate her own restaurant.

“Not only is she using Chinese food stereotypes / naming, she is shaming traditional Chinese food cooking with MSG / grease / starch,” one Twitter user wrote in a widely shared post that has since been made private. The controversy exacerbates a fierce cultural divide over what constitutes appropriation in the food world – and, to some, continues a history of Asian cuisine being degraded in America.

Haspel, who is white and from New York, has run a food company for the last ten years, in which she modifies recipes across cuisines in order to make them healthier and more accessible to those with dietary restrictions. Haspel loves Chinese-American food, and when she was advised by health practitioners that she should eat less gluten, she began developing gluten-free Chinese recipes.

Lucky Lee’s opened on Monday, and offered modified versions of Chinese-American staples like General Tso’s Chicken and Kung Pao Shrimp. On Tuesday at lunch, the restaurant was full; the overhead menu proudly stated that the food is “gluten-free, dairy-free, wheat-free, corn-free, peanut-free” and made without MSG or food coloring. The restaurant seemed to fit neatly into the wave of fast-adjacent, health-forward and ethnically diverse franchises quickly populating many cities, from Chipotle to Indikitch to Bonmi.

But a backlash over Lucky Lee’s took hold online, as people took issue with more than just the menu. A since-deleted post on the Lucky Lee’s Instagram quoted someone who said that Chinese food makes them feel “feel bloated and icky,” while another quotes a woman who said, “I was just telling my husband last night, I wish there was a place to get healthy Chinese food!”

Others took issue with the restaurant’s name, which could be construed as misleading. While Lee is a common Chinese family name, Lucky Lee’s refers to the first name of Haspel’s husband, who is also white.

Harsh comments flooded into the restaurant’s Instagram, Twitter and Yelp pages, accusing Haspel of appropriation and profiting off of someone else’s culture. A backlash to the backlash also emerged, with people accusing Lucky Lee’s critics of being “pearl clutchers.” The restaurant’s Yelp page was placed on “unusual activity” alert due to a deluge of both one-and five-star reviews.

When reached on the phone, Haspel was apologetic but steadfast. “The backlash has been surprising and definitely hurtful,” she said. “We have definitely made some mistakes but are really grateful from the feedback, because it’s really given us the opportunity to reflect and make changes in a positive way.”

In defending her restaurant, Haspel pointed to many other chefs who specialize in food that’s different from their own ethnicity. “We love the fact we have the freedom now to cook anything we want,” Haspel said. “I encourage any restaurateur to cook the food that they love to eat and to share it with others.”

Oliver Wang, a sociologist who writes about food and culture, acknowledges that cross-pollination and cuisine-borrowing are omnipresent both in America’s past and present. “In Southern California, a lot of sushi restaurants are run by Koreans,” he says. “The donut industry, for a generation-plus, has been dominated by Cambodian-Americans.”

However, Wang argues that when white people sell food from minority cultures, there’s a fundamentally different power structure at work. “When you have people who are more powerful who are borrowing, they are often able to profit from that in a way that less powerful people aren’t,” he says.

While Haspel has been seeking healthier alternatives to many cuisines for years, Wang says Lucky Lee’s advertisements – which juxtaposed her “clean” version of Chinese food against a lesser standard – play into a history of negative stereotypes about Chinese cuisine in America.

Over the years, Chinese restaurants have often been dismissed as dirty hole-in-the-wall establishments; rumors of local restaurants selling cat or dog meat have spread over more than a century. And MSG, considered a staple of Chinese restaurants, was regarded as unambiguously unhealthy for years before most of those claims were debunked. “There is a fear and exotification and paranoia around what’s in the food being served in Chinese or Asian restaurants,” Wang says. “What we’re seeing with this current example is just a variation on a century-plus of history.”

Like Wang, the sociologist and author Nancy Wang Yuen says she didn’t see a problem with a person of one culture selling the food of another’s. White restaurateurs, she says, could mitigate potential criticism through collaboration with Asian chefs, respect for the cuisine’s history and attention to detail.

But she pointed to a more recent history in which white chefs, like Zimmern or Ramsay, demeaned food made by Asian chefs in order to elevate the quality or even “authenticity” of their own versions. Last year, a white restaurateur who runs Aloha Poke tried to force other Hawaiian restaurants to remove the word “Aloha” from their names. And Burger King issued an apology this month after an ad for a Vietnamese-branded burger depicted diners struggling to eat Western food with chopsticks.

“It’s that superiority that Chinese-Americans are really cringing at,” Yuen says. “Why do you have to devalue my food in order to make your version sound better? It’s a very colonial kind of superiority.”

The debate of appropriation in the food world has been long and contentious. Earlier this year, the San Francisco Chronicle praised Thomas Keller’s new Mexican restaurant, calling it “cultural appropriation done right.” Writer Soleil Ho pointed to Keller’s collaboration with Mexican chefs, attention to detail and his effort to give credit to the cuisine’s original creators.

Haspel says that she created recipes for Lucky Lee’s through her own experimentation and through consultation of gluten-free cookbooks. When asked if Lucky Lee’s employs chefs of Chinese descent, Haspel said yes, and added, “When we were interviewing, what we looked for were people’s smiles. We looked at people’s energy and passion when they’re behind the stove.” 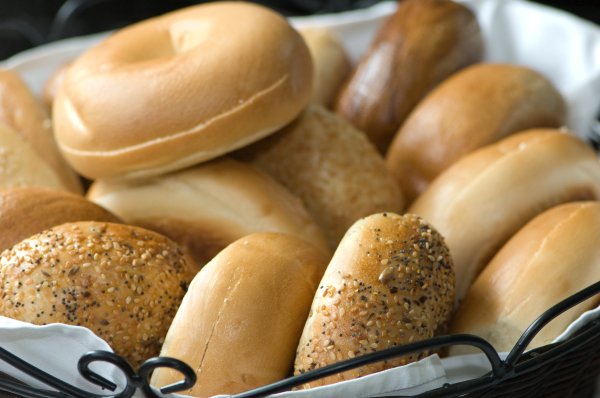 This Unusual Bagel Slicing Hack Is Riling Up the Internet
Next Up: Editor's Pick