Nikolaj Coster-Waldau has read your fan theories about how Game of Thrones ends, but says no one has come close to the true ending yet.

Coster-Waldau who plays Jaime Lannister on the HBO series stopped by Jimmy Kimmel Live! on Tuesday night as part of the ongoing media blitz before the show’s eighth and final season kicks off on HBO on Sunday night. Host Jimmy Kimmel plied him with fan theories about how the show will end.

One popular theory is that Jaime will kill Cersei, his sister and baby mama who currently sits on Westeros’ Iron Throne. “That’s a theory,” the actor replied. “It makes sense though, if you think about it.” Another is that Arya Stark will use her unique set of skills to take on Jaime’s face and kill Cersei herself. “That would be cool, wouldn’t it?” he said in an impressive non-answer.

When Coster-Waldau was asked whether Jon Snow would become the Night King, he appeared baffled, simply asking, “How?” While his response to that particular theory makes it seem less likely, never forget Coster-Waldau is an excellent actor who is occasionally paid to look baffled.

Coster-Waldau has pored over some fan theories, but told Kimmel, “I’ve never read anyone who got the whole thing.”

As for the real ending, even Coster-Waldau didn’t see it coming. “When I read it the first time I was blown away,” he said. “I wrote Dan and David, the two creators, and I was like, ‘I really don’t know how you did it, but I can’t imagine a better way of ending the show.’” 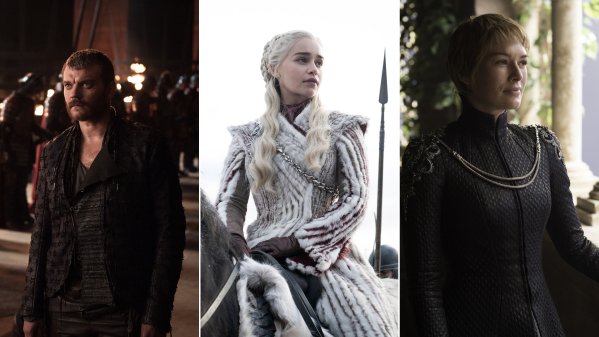 The Best Game of Thrones Fashion Moments of All Time
Next Up: Editor's Pick