As you know, last week was our first fully independent week as a new company. I want to thank the nearly 50 members of our staff, led by Chief People Officer Sue Suh and CFO Chris Gaydos, who worked tirelessly over the last few months to roll out improved benefits for our employees and to ensure that the transition of our systems was seamless.

When I think of everything we’ve been able to accomplish as a team in a year in which we were sold not once but twice, I’m filled with optimism about what is possible going forward. On Monday, we saw further recognition of these achievements with the announcement of seven finalist nominations from the Deadline Club. And in just 10 days we will host the first TIME 100 Summit, a day-long conference featuring amazing TIME 100 honorees committed to improving the world. You can read more about it here.

With our ambitions continuing to grow and my increased responsibilities in our company in addition to Editor-in-Chief, I am today delighted to announce a well-deserved promotion to Deputy Editor for Sam Jacobs, who has been my partner in nearly everything I’ve done since joining TIME, as well as a new team of executive editors and several new senior editors in New York.

Sam will oversee our journalism across all platforms and manage the newsroom. The TIME that many of you have joined in the last five years has been shaped by Sam’s excellent judgment and direction. He has recruited and hired dozens of our journalists, overseen record growth in our global audience and played a major role in the print-digital integration that has been vital in getting us where we are today. One of the most consistent reactions from potential buyers throughout the sale process was how brilliantly Sam articulated our editorial vision and demonstrated the impact of journalism. I’ve had the great fortune to work with Sam nearly every day for most of the past decade, and look forward to his continued leadership in this broader role.

Sam will work alongside Deputy Editor Eben Shapiro, who will oversee the launch of new editorial offerings in health, business and technology. He will also continue his work on special projects such as the Davos and “Guns in America“ issues, and managing editorial operations from legal to bookazines. Ensuring the continued excellence of our current work, while successfully expanding into new verticals, is a crucial challenge for our editorial operation, and we’re fortunate to have Sam and Eben working together to get this right. A former New York Times business reporter who later led coverage of personal health at the Wall Street Journal, Eben is perfectly suited to lead the recruiting, strategy and execution in these areas. So many of the seamless transitions of the past year—with more to come when we move into our new headquarters in New York—are a credit to Eben’s behind-the-scenes work.

Kelly Conniff becomes Executive Editor. Kelly has managed two essential jobs with excellence over the last year. As chief of TIME’s culture coverage, she has overseen some of our most powerful cover stories, such as Black Panther, Spike Lee and the Royal Wedding. In her other job, as Time.com editor, Kelly has brought discipline, focus and style to our digital operation. Kelly will oversee our Culture coverage and remain the leader of our digital operations, driving daily news and feature coverage and overseeing the journalism on TIME’s largest platform.

Ben Goldberger becomes Executive Editor. Week in and week out, Ben has provided the vision and structure for our magazine, which after 96 years maintains more print subscribers than any news publication in America. Ben has a hand in virtually all of our major journalism, bringing creativity, ambition and rigor to countless major features, multi-platform projects and many of our most successful packages like the South Issue and the Opioid Diaries. In his new role, Ben will also oversee outside contributors, including the Ideas team, work with Kelly to execute features, and of course continue to lead the magazine and helm our signature Person of the Year franchise.

Dan Macsai becomes Executive Editor. The maestro behind TIME’s most powerful franchises, including TIME 100 (just wait till you see this year’s!), as well as numerous rankings and lists, including Genius Companies and Best Inventions, Dan has established himself as one of TIME’s most influential editors—a connector who sees across silos and an entrepreneurial leader who makes new opportunities wherever he works. In his new role, Dan will be charged with growing the size and impact of accolades and franchise projects, and leading the TIME 100 expansion that will begin with the Summit this year.

And I’m excited to announce the following new senior editors who join the ranks of our talented senior editor team.

Haley Sweetland Edwards becomes Senior Editor. As our leading voice on some of the most complex and important policy changes in America, Haley has guided readers over the last five years through the tumult in health care, immigration and education. As an editor, Haley will lead policy coverage, serving as a crucial bridge between Washington and New York and driving coverage across all platforms. Luckily for us and our readers, we will also continue to rely on Haley’s talents as a writer and reporter.

Lori Fradkin joins TIME as Senior Editor. In a short time since arriving from Cosmopolitan.com, where Lori was Executive Editor and part of a National Magazine Award-winning team, she has made her talents as an editor, eye for stories and feel for audience abundantly clear. Lori oversaw our excellent future of fertility cover package and has commissioned some of our most-read first-person pieces and reported features. In her new role, Lori will edit features and work with our Ideas team, among other responsibilities.

Sean Gregory becomes Senior Editor. Since joining TIME in 2002, Sean has been the publication’s lead writer on all things sports, delivering major profiles of the likes of Serena Williams, Stephen Curry and Lewis Hamilton and documenting the most compelling stories on and off the sidelines for our readers. What anyone who’s had the pleasure of working with Sean knows is that he is also an incisive and rigorous editor, and we are lucky to have him expand his role in this way across our wide range of coverage while continuing to dive into major sports stories when the muse calls.

Tina Susman joins TIME as Senior Editor. Most recently National Editor at BuzzFeed where she managed a team that attracted industry-wide attention for breaking news, Tina has nearly 25 years of experience as an editor and reporter. For the Associated Press and Newsday, Tina oversaw and contributed coverage from throughout Africa. For the Los Angeles Times, among multiple roles, Tina was Baghdad bureau chief. Her work has been recognized for awards from the Society of Professional Journalists and the Overseas Press Club, among other organizations. In her new role, Tina will oversee a team of reporters working on impactful stories across platforms.

And while we are celebrating new additions, I’d like to welcome back Senior Editor Emma Barker from parental leave. Since joining TIME last year, Emma has directed our health features and shepherded ambitious reporting, including Katie Reilly’s story on teachers in America, the most-read cover story of 2018. Emma joins this group and will continue to play a pivotal role in our features editing.

Please join me in thanking and congratulating this extraordinary team. And watch this space—there are more exciting updates to come in TIME Edit and across the company. 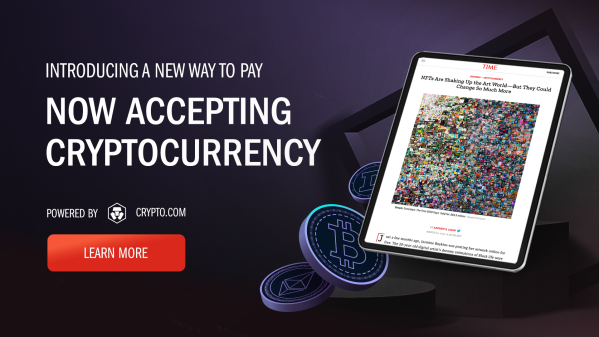 TIME Partners with Crypto.com to Offer Cryptocurrency as a Form of Payment for Digital Subscriptions
Next Up: Editor's Pick