You've Seen Trump as a Reality TV Star. But What About in a Chinese Opera?

Donald Trump can already seem larger than life. But what would the world be like if there were two of him?

From Apr. 12 to 15, audiences in Hong Kong will get a chance to find out. In the city’s historic Sunbeam Theater, the U.S president—or rather a loose portrayal of him—will step into the colorful world that is Cantonese opera. He’ll be joined by China’s “great helmsman” Mao Zedong, North Korean leader Kim Jong-un, and yes, a fictional twin brother, in a production called Trump on Show.

“[Barack] Obama has a half-brother in China,” says Li Kui-ming, the opera’s director and lyricist, referring to Mark Okoth Obama Ndesandjo, an investment consultant living in the southern Chinese city of Shenzhen, who shares the same father as the former U.S. president. “So why not write a twin brother for Trump who also lives in China, speaks fluent Chinese, and is the exact opposite of Trump, into my opera?”

Li, 64, was a financial journalist before he became a highly successful practitioner of feng shui—the Chinese art of arranging buildings and furniture to enhance the flow of energy. It can be a very lucrative calling in Hong Kong, where developers and businesses will pay enormous fees for advice on how to design a condominium or lay out an office for optimal feng shui, which is thought to confer good fortune and prosperity.

Along the way, Li became a sought-after lyricist, penning the libretti for more than 30 Cantonese operas. Trump on Show is his latest. The three-hour long production is set against the backdrop of geopolitics that have dominated the recent news cycle: the ongoing U.S.-China trade war, and Washington’s relationship with Pyongyang.

The opera doesn’t jump straight into modern-day affairs, however; one of the earlier acts sees Mao playing table tennis with former president Richard Nixon, a nod to the so-called ping-pong diplomacy of the 1970s, when the U.S. formally recognized the People’s Republic of China to end decades of estrangement.

Despite these allusions, Li maintains the show isn’t political in nature.

“Politics can’t make people laugh,” he says, attired in a vivid black and gold ensemble that wouldn’t look out of place on the operatic stage itself.

But what can, he adds, are Trump’s quirks and theatrics. The script makes fun of the president’s penchant for fast food and his eagerness to talk up his deal-making abilities whenever the opportunity may arise.

“There’s one special scene during which Trump gives business advice to Kim, telling him he has a brilliant idea that will make him rich and famous. He suggests Kim partners with one of his favorite brands, Coca-Cola, and propose infusing the soft drink with ginseng,” Li says. “Kim loves the idea. He goes crazy for it.”

Adding to the fun, lead actor Lung Koon-tin plays three of the main characters—Trump, Trump’s twin brother, and Mao. But that casting decision wasn’t just for laughs. It’s meant to underscore what Li sees as the similarities between the president and the former Chinese leader, despite their positions at opposite ends of the political spectrum. Trump, Li points out, is 72 years old—the same age as Mao when he started China’s Cultural Revolution in 1966. Li says Trump, in a way, wants to bring his own shakeup to the U.S.

“He wants to change the country, just like Mao,” Li says.

Li loved Cantonese opera growing up, regularly attending performances and knowing many of the more famous songs by heart. The UNESCO-recognized art form has its origins in the Guangdong and Guangxi provinces of Southern China, and is known for its incorporation of distinctive falsetto-style singing and martial arts routines. Performers don elaborate costumes and bold makeup characterized by contrasting colors and dark lines, their every movement and expression dramatic.

When the city’s famed Sunbeam Theater, which in its decades-long history had become synonymous with Cantonese opera in Hong Kong, was forced to close in 2012 due to a substantial rent increase, Li stepped in. He signed a four-year lease and paid the monthly rental of $125,000 out of his own pocket. His philanthropic gesture saved the 1000-seat cultural landmark where many of the city’s most prominent opera performers honed their craft.

Li hopes that his latest production will attract a younger, more up-to-date crowd that probably wouldn’t be spending Friday night at a traditional opera house.

“We’ve successfully captured a new audience of 4,000,” he says of the four sellout shows. “Those 4,000 could be my new fans, and when I write more operas like this in future, that are not so traditional, my wish is that they will come again.”

Li’s dream doesn’t stop there. Far-fetched as it may be, he hopes Trump on Show will capture the attention of the U.S. president himself—and earn him an invitation to the White House to stage it.

“If Trump watches this, he will laugh from the beginning till the end,” Li says, imagining him and and his associates’ reactions as they witness the Oval Office, with its stripey walls and beige carpeted floors, taken over by Mao and Nixon lookalikes hotly debating U.S.-China relations over a game of ping pong.

And from the White House, Li wants the Cantonese opera to make it to Broadway. After all, Trump on Show has the political preoccupation of Hamilton, the edgy comedy of the Book of Mormon and, with the ghost of Abraham Lincoln making a cameo in one scene, a little hint of Phantom.

“One day, Broadway, Cantonese opera, and Donald Trump,” Li says with confidence. “I know it will be a hit.” 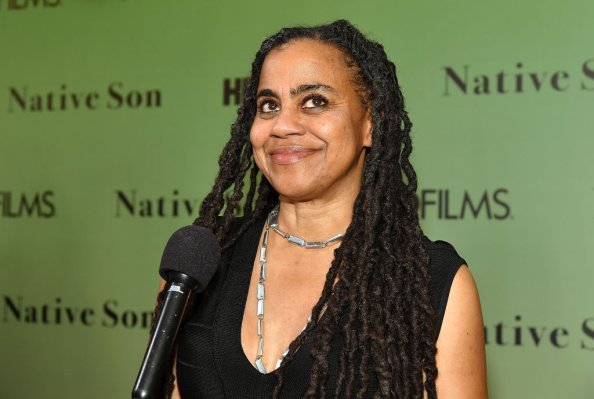 Playwright Suzan-Lori Parks on Engaging With Her Audience: ‘The Spoon-Feeding Times Are Over’
Next Up: Editor's Pick