Meghan Markle Approached Her Birth Plan Differently Than Princess Diana and Kate Middleton. Here's Why Her Decision Isn't So Surprising

Though Meghan, Duchess of Sussex, gave birth early Monday morning, they opted not to tell the public all the details of the royal baby’s birth right away. Kensington Palace has previously announced that Meghan Markle and Harry, the Duke of Sussex, would keep the birth plans private.

Now that the baby is born, royal fans still don’t know for certain where the family chose for the birth. But Prince Harry was interviewed by Sky News on Monday afternoon local time in Windsor, just hours after his wife gave birth at 5:26 a.m., according to a royal press release. That’s not where most royal babies have been born, but it’s where the Sussex home, Frogmore Cottage, is.

Let’s step back and look at the history. Princess Anne, Princess Diana and Catherine, the Duchess of Cambridge, all had their royal babies at the Lindo Wing in Paddington, which is a close drive from Kensington Palace. But Katie Nicholl, Vanity Fair royal correspondent and the author of Harry and Meghan: Life, Loss, and Love, told TIME in a previous interview that it was likely the couple would choose a home birth for the royal baby.

However, it’s also been widely reported that the Duchess of Sussex would choose Frimley Park Hospital in Surrey, which is much closer in proximity to the couple’s new home. Frimley wouldn’t be so surprising, according to Victoria Arbiter, a royal expert and commentator for CNN.

When Princess Diana and Kate Middleton had their children in the Lindo Wing, they were only a short drive away. “Harry and Meghan are now in Windsor, and for anyone about to have their first baby, I would think they would want to have the shortest drive possible,” Arbiter says. “So it actually makes sense for a number of reasons.”

It wouldn’t even be a break from tradition either: At least four royal babies have already been born outside of Lindo in recent years. Two royal babies have been born at Frimley, and Sarah Ferguson gave birth to Princess Beatrice and Princess Eugenie at the Portland Hospital for Women and Children in London.

Sophie, the Countess of Wessex — who is married to Queen Elizabeth’s youngest son, Prince Edward — gave birth at Frimley Park Hospital in 2003. Her daughter Louise was born one month prematurely, and the royal family was grateful to the staff at Frimley for making sure the Countess had a healthy and safe birth. For her second child, James, in 2007, the royals went back to Frimley.

Sophie returned to the hospital in 2014 and showed how much the staff and their work meant to her. “The service you provide is paramount and can literally make the difference between life and death, I can attest to that,” Sophie told members of Frimley’s staff during the visit, the Telegraph reported. Clearly, the hospital is “equipped with dealing with royal births,” Nicholl told TIME in an email.

Though some royal mothers have often chosen the same hospitals, Arbiter says, “it’s not really about tradition. It’s more about personal choice and which hospital best suits your particular birth plan.” And, if Meghan chooses to have a home birth at Frogmore, that would actually adhere to royal tradition rather than break it. “Royal women for centuries had their babies at home,” Arbiter says.

Since the birth game-plan is to be kept private, as the palace said, we also can’t expect a post-birth public photograph of both Meghan and the baby after she welcomes her new child. Princess Diana and the Duchess of Cambridge both took the same picture outside Lindo Wing, so Arbiter says some people may be disappointed and miss that with the Duke and Duchess of Sussex.

Prince Harry and Meghan Markle are planning to meet the press with their baby for the first time in two days, Harry told Sky News on Monday. But one thing the public is going to have to get used to, Arbiter says, is giving the couple some privacy with their new baby. “Harry and Meghan are very keen to maintain the privacy of their child and also to sort of set the boundaries on what is acceptable and what’s not,” she says. “And we have to respect any new mother’s choices in that regard.” 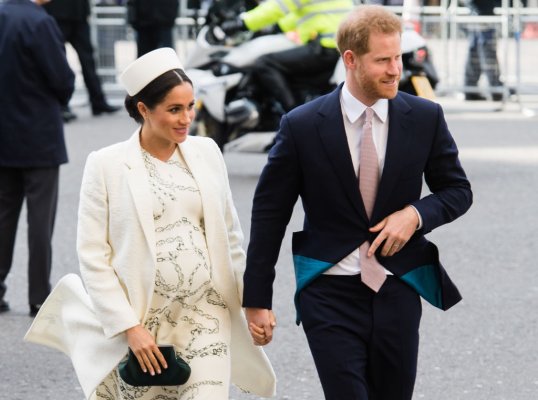 Prince Harry and Meghan Markle Are Keeping the Birth of Their Royal Baby Private
Next Up: Editor's Pick