Robert Dillon has a lot of verve—and not just because he’s an employee of Spirit Airlines. He proved that by jumping into the fun with a group of cheerleaders entertaining themselves during a flight delay and it was all captured in a now-viral video.

Passengers were waiting to board a flight at Myrtle Beach International Airport (MYR) in South Carolina, when they got the heart-sinking news that what was supposed to a short flight delay was becoming a much longer one. Among the disappointed crowd were members of the South Jersey Storm dance squad who had come to Myrtle Beach for a competition, according to Yahoo Lifestyle. They decided to look for the silver lining in the delay and get in a little dance practice, keep themselves entertained, and perhaps cheer up their fellow travelers while they were at it.

As they started to practice the routine set to the V.I.C. track, “Wobble Baby,” passengers stuck in the airport gathered to watch and, per modern custom, pulled out their phones to record the fun. In one video clip, as the young women danced, a Spirit Airlines employee named Robert Dillon can be seen joining the group and busting out all his moves and a pretty fierce wobble, much to the delight of the squad.

“A @SpiritAirlines employee helping our cheerleaders pass sometime during our delay!” Twitter user Kristie Brown wrote in her tweet that unleashed the video into the world.

Dillon had been trying to make announcements about the flight delay, but instead of getting frustrated by the music interrupting his announcements, he decided that if he couldn’t beat them, he may as well join them and started dancing. According to Yahoo Lifestyle, when he’s not working for Spirit Airlines, Dillon is an activities coordinator at a Myrtle Beach resort and often line dances with guests at the pool. So he was well acquainted with “Wobble Baby,” and was ready to strut his stuff when the song came on. Of course, he was still on the clock, so when he got a call, he jumped back on to official duty.

Luckily, his employer apparently approved of the impromptu dance party, as Spirit Airlines got in on the viral fun and tweeted out the video. “Our flights are mostly on time, but when they aren’t…we make the best of it! Huge shout out to Robert Dillon at @flyMYR who kept our Guests entertained while they patiently waited to board their flight!” the tweet read. 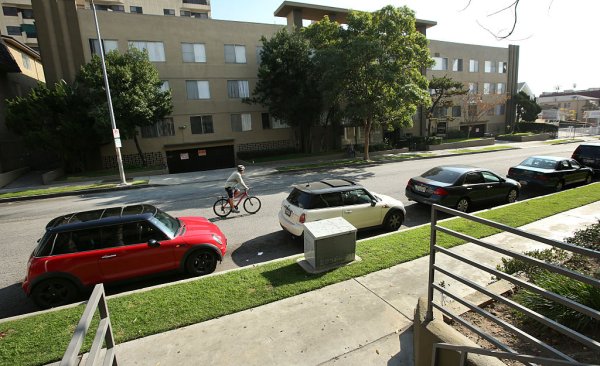 People Can't Look Away From This Epic Driver Standoff
Next Up: Editor's Pick