President Trump Joked About Biden's Conduct With Women. Then Biden Did, Too

President Donald Trump and Joe Biden both treated questions about the former vice president’s conduct around women as a joking matter in separate remarks Friday.

After several women came forward to say that Biden had made them uncomfortable by doing things like touching their hair during public appearances, Trump tweeted a doctored video showing Biden massaging his own shoulders.

Asked about it on Friday morning as he prepared to leave for California, the president defended the tweet, arguing that it was light-hearted.

“Let’s see what happens. But people got a kick,” Trump told reporters. “We’ve got to sort of smile a little bit, right?”

Hours later, Biden himself joked about the subject, noting as he spoke on stage before the International Brotherhood of Electrical Workers that he had briefly hugged a man who introduced him.

Biden told a reporter later on Friday that he “wouldn’t be surprised” if more people come forward. When a reporter asked directly if he wanted to apologize to anyone, Biden demurred.

Both Trump and Biden have faced questions about their behavior around women, although for very different behavior.

During the 2016 campaign, at least 18 women accused Trump of sexual harassment or misconduct, alleging everything from unwanted kissing to walking through women’s dressing rooms at the Miss USA pageant to putting his hand up their skirts. In remarks caught on tape during an “Access Hollywood” filming he said that as a celebrity he could “grab” women by the genitals.

Trump called his accusers liars and threatened to sue them, although he apologized for the “Access Hollywood” remarks, calling them “locker room talk.” He did not sue the women and, in fact, faces a lawsuit for defamation from former “The Apprentice” contestant Summer Zervos for calling her a liar.

In recent days, Biden has faced criticism over his tendency to touch and hug women during public events. On Thursday, he posted a video online in which he said he would be “much more mindful” when interacting with people.

“Social norms have begun to change, they’ve shifted. And the boundaries of protecting personal space have been reset,” he said in the video. “And I get it. I hear what they’re saying. I’ll be much more mindful, that’s my responsibility and I’ll meet it. But I’ll always believe that governing is about connecting with people. That won’t change, but I’ll be more mindful and respectful of people’s personal space, and that’s a good thing.”

The first woman to make allegations against Biden, former Nevada assemblywoman Lucy Flores, tweeted on Friday afternoon that Biden’s jokes at the IBEW event prove that he “hasn’t reflected.”

“It’s clear @JoeBiden hasn’t reflected at all on how his inappropriate and unsolicited touching made women feel uncomfortable,” Flores tweeted. “To make light of something as serious as consent degrades the conversation women everywhere are courageously trying to have.”

Pressed by a reporter whether he was a “good messenger” for criticism of Trump on his treatment of women, the president said he was.

“Yeah, I think I’m a very good messenger, and people got a kick out of it,” he said. “He’s going through a situation.” 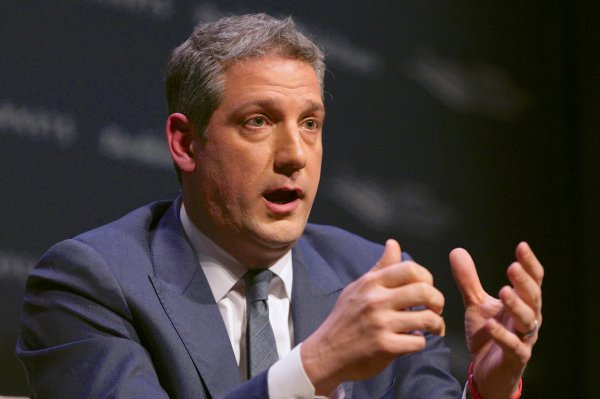 Tim Ryan Is Betting Big on the Rust Belt
Next Up: Editor's Pick