A migrant caravan walks into the interior of Mexico after crossing the Guatemalan border near Ciudad Hidalgo, Mexico on Oct. 21, 2018.
John Moore—Getty Images
By W.J. Hennigan

For all the political hostility, President Donald Trump stumbled into a hard truth of international migration this week: No amount of foreign aid is going to stop the exodus of undocumented migrants from El Salvador, Guatemala and Honduras to the United States as long as those Central American countries remain impoverished, dangerous and unstable.

Trump, who plans to visit the southwestern border on Friday, directed the State Department on March 29 to halt about $500 million in aid for all three nations — collectively known as the Northern Triangle — as punishment for failing to prevent their citizens from coming to the U.S.

“We were paying them tremendous amounts of money, and we’re not paying them anymore because they haven’t done a thing for us,” Trump told reporters.

The unprecedented move, which was derided by both Democrats and Republicans, was widely seen as counterproductive to U.S. goals. But it also left open the confounding question of what, precisely, will tamp the flow of emigrants from these troubled nations. Lawmakers and foreign policy analysts, while critical of what they saw as Trump’s ham-fisted declaration, were also quick to note an inherent contradiction in U.S. policy in the region: Ending aid to the Northern Triangle isn’t going to solve the problems at the border. But continually shelling it out won’t either.

Sen. Patrick Leahy, the ranking Democrat on the Senate Appropriations Committee, described a tricky balancing act. There’s a lot that the U.S. can do in the Northern Triangle at the local level to help alleviate poverty, counter the influence of gangs, and improve education and other basic services, which helps reduce migration, he told TIME. But at the national level, these nations’ leaders are often unethical and “their priority is staying in power and enriching themselves and their families,” he said.

“On the one hand, the President caught everyone off-guard,” Leahy said of Trump’s tactic to pull foreign aid. “If he does what he says we will be shooting ourselves in the foot. It makes no sense to cut off the aid that can improve people’s lives and lessen pressures for out-migration. But we also need to recognize that all the aid in the world — and we’ve been providing aid to these countries for a long time — is not going to make the difference unless they have leaders with integrity who care as much about addressing the needs of their own citizens as we do.”

Doris Meissner, who was commissioner of the U.S. Immigration and Naturalization Service from 1993 to 2000 and is now a senior fellow at the Migration Policy Institute, said the U.S. should focus on the underlying issues that contribute to the surge of annual asylum seekers, which has spiked to more than 97,000 — a nearly 2,000% increase over the level in 2008, when fewer than 5,000 people apprehended by border agents expressed fear of returning home. “The Northern Triangle is among the most violent places on Earth,” she said. “This is a big issue. It is a big challenge. And it needs a set of solutions. Ensuring safety and better living conditions in these countries is an essential element.”

El Salvador’s homicide rate, driven by street gangs like MS-13, makes it one of the world’s deadliest countries not at war. Guatemala faces food shortages, kidnappings and extortion cases that forces many of its citizens to attempt the tortuous trip northward. Honduras is among the poorest in Latin America with more than half of the population living under the poverty line.

Meissner said that the only sensible way to both diminish the lure of the U.S. and stabilize the Northern Triangle is to pursue measures aimed tackling government corruption, drug trafficking and gang violence. Cutting the aid funding will likely increase the flow of refugee seekers, not reduce it.

The Trump Administration once shared this policy perspective. Vice President Mike Pence told representatives from the Northern Triangle countries that “we’re in this together” during a conference in Miami in June 2017. “We stand with you in your commitment to root out crime and corruption,” he said. “We stand with you in your commitment to stop the scourge of drug trafficking once and for all. And the United States of America stands with you as you build a more secure and prosperous future for the benefit of your people and the benefit of the Western Hemisphere.”

The U.S. Agency for International Development (USAID) disperses much of the aid through non-government organizations through the Northern Triangle Countries’ Alliance for Prosperity Plan, which has a stated purpose of “decreasing high levels of violence and insecurity, pervasive poverty and chronic malnutrition” in the three nations. The programs support a wide array of work such as a $42.2 million five-year program in El Salvador to increase and improve employment of at-risk youth living in high-crime areas; or a three-year $3 million effort to improve the quality of water in western Guatemala; or a five-year $4.5 million project to work with Honduran state institutions to prevent, detect, investigate, and prosecute corruption cases.

USAID cited some success cases last summer. El Salvador saw homicides plummet 61% between 2015 and 2017 in the municipalities where USAID operates; new USAID investigation models in Guatemalan court houses boosted the number of convictions in extortion cases from a paltry 26 in 2015 to 180 as of October 2017; and USAID agriculture investments lifted 17,937 families in Honduras, or over 89,000 people, out of extreme poverty since 2011.

Still the flood of migrants from Central America has overwhelmed Border Patrol agents and immigration officers not accustomed to apprehending so many children and having to house them in facilities poorly suited for holding families and kids. Two children, both from Guatemala, died in December after being apprehended by U.S. border officials. And the Trump Administration, after coming under fire for separating at least 2,500 children from their parents in May and June of last year, is holding more families together, but that means it is running out of detention space as families continue to arrive at the border.

Trump has developed a grab bag of policies to stem the flow of migrants, including supposed deterrence measures like threatening the closure the U.S. border with Mexico. The dystopian optics of the U.S. closing the border with military force could be perceived as an alarming tactic to Latin America, a region that has suffered multiple incursions from the U.S. military over the past century.

Mexican President Andres Manuel Lopez Obrador told reporters this week that Mexico was “not going to get into a confrontation with the government of the United States.” Since taking office in December, his administration agreed to a divisive plan in which some Central American asylum-seekers wait in Mexico while their U.S. immigration court hearings play out.

“Obviously, we have to help because Central American migrants pass through our territory and we have to bring order to this migration, make sure it’s legal,” Lopez Obrador told reporters April 1. “That’s what we’re doing. But serenely, calmly, without a commotion and with great prudence and responsibility.” 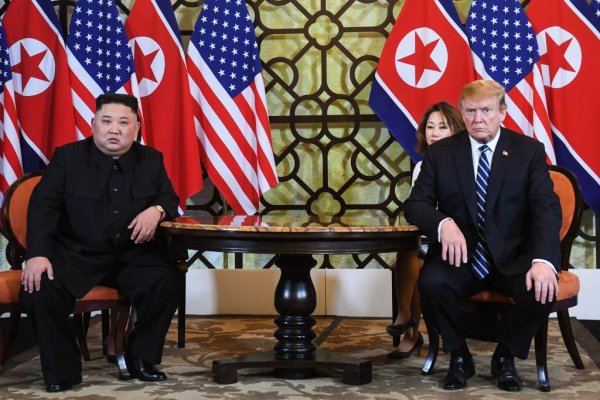 Trump Sidelined His Own Top Negotiator on N. Korea
Next Up: Editor's Pick