Pilots commanding a doomed Ethiopian Airlines jet were hit with a cascade of malfunctions and alarms seconds after the Boeing Co. 737 Max took off from Addis Ababa on March 10, according to a preliminary report released Thursday.

Most critically, the plane’s automatic anti-stall system that was also linked to a previous 737 Max crash months earlier began pushing the nose of the jetliner down less than two minutes into the flight due to a malfunctioning sensor. The crew was able to climb as high as 13,400 feet and request permission to return to the airport after temporarily disabling part of the system.

But the pilots struggled to control the plane, which entered a steep dive reaching speeds of 575 miles per hour before crashing into a field, killing all 157 people on board.

Boeing should review the flight-control system to ensure the plane’s safety, Ethiopian Transport Minister Dagmawit Moges said at a news conference in the capital of Addis Ababa on Thursday to announce the report. Aviation authorities should verify the issues have been adequately addressed “before the release of the aircraft to operations.”

The comments underscored the need for a software update that Boeing already has under way for the anti-stall system that can push down the plane’s nose. That so-called MCAS feature had been suspected in the crash of Ethiopian Airlines Flight 302 about six minutes after takeoff on March 10. The disaster came less than five months after a 737 Max operated by Lion Air plane plunged into the Java Sea and killed 189 people after MCAS was activated. The model is now grounded worldwide as investigators probe its airworthiness and how it gained permission to fly.

Dagmawit said the pilots followed proper procedures issued by Boeing and U.S. aviation authorities after the Lion Air crash, though details in the report raised questions about whether they followed all the steps.

Boeing blamed the accident on “a chain of events” and acknowledged its responsibility in at least one of those chain links.

“As pilots have told us, erroneous activation of the MCAS function can add to what is already a high workload environment,” Boeing Chief Executive Officer Dennis Muilenburg said in a statement. “It’s our responsibility to eliminate this risk. We own it and we know how to do it.”

Muilenburg confirmed that a software update is in the works and should be approved by regulators and ready to implement “in the weeks ahead.” The planemaker’s fix, accompanied by additional training, “will eliminate the possibility of unintended MCAS activation and prevent an MCAS-related accident from ever happening again.”

Thursday’s report paints a harrowing picture of the cockpit during most of the six-minute flight.

The altitude and airspeed information on the captain’s side of the cockpit didn’t agree with the copilot’s and multiple alarms were sounding. At various times, they were being warned of flying too fast and told not to “sink” by automated systems on the plane.

Sensors in the aircraft that report how high its nose is pointed relative to oncoming air varied by almost 60 degrees. One of the “angle-of-attack” gauges read 15.3 degrees, likely an accurate reading for a plane taking off. The other erroneously read 74.5 degrees — which would suggest a plane pointing almost straight skyward.

The malfunctioning sensor triggered a feature on the 737 Max that automatically forces the aircraft’s nose down when it senses the plane is aimed too high and is at risk of an aerodynamic stall.

Over the next two minutes, audible “DON’T SINK” alerts sounded in the cockpit. The captain called out three times “pull-up” and the first officer acknowledged the command, the report said.

Automatic systems commanded the nose to pitch down four times without the pilot’s input, according to the report. The plane’s angle of descent reached 40 degrees.

Pilots disabled the motor that was driving down the nose about 40 seconds after the first automated dive. But the plane was still set to dive, forcing them to pull back on their control column to keep climbing.

They were able to reach an altitude of 13,400 feet, almost 6,000 feet above where they’d taken off, during that time.

But they were unable to reset the trim on the horizontal stabilizer, the wing on the tail of the plane, according to the report. For unexplained reasons, they reactivated power to the electric trim motor about 30 seconds before the crash.

Within seconds, the plane was pushed automatically into a steep dive that the pilots couldn’t counteract with their control column. Switches on the pilot’s control column are designed to overcome such a dive but the report doesn’t say if that was attempted.

One question raised by the Ethiopian report is whether guidance issued to pilots by Boeing in the wake of the Lion Air crash was sufficient. While the U.S. manufacturer and aviation regulators made a point of telling airlines worldwide how to disarm MCAS, the pilots of the Ethiopian Airlines plane were found to have followed “all the procedures repeatedly,” according to Dagmawit.

The investigation, staffed by Ethiopian, U.S. and European safety experts, has pitted Boeing’s reputation for technical quality against a successful, modern African airline that’s a symbol of pride for Ethiopia. Importantly, Dagmawit said there were no dissenting voices among participants who worked on the preliminary report, which was sent to the 34 nations with citizens aboard the flight. The full report is expected to be completed within one year.

“Despite full compliance with the emergency procedures,” pilots could not recover from the “persistence of nose diving,” state-owned Ethiopian Airlines said. The crew followed recommendations mapped out by Boeing and approved by the U.S. Federal Aviation Administration, the airline said.

Boeing said it’s reviewing the findings, and the FAA said it’s working to understand what happened.

“Understanding the circumstances that contributed to this accident is critical to ensuring safe flight,” said Boeing Commercial Airplanes President and CEO Kevin McAllister in a statement. He said the company will review the report and “will take any and all additional steps necessary to enhance the safety of our aircraft.”

The details underscore the focus on MCAS, a new software feature installed on the fourth generation of the 737, the world’s best-selling commercial aircraft family.

“It is recommended that the aircraft flight control system related to the flight controllability shall be reviewed by the manufacturer,” Dagmawit said at the news conference, without directly naming the MCAS.

The crash has also raised questions about the aircraft’s approval to fly. In the U.S., the Transportation Department has ordered a full audit of the FAA’s 2017 certification of the Max and the Justice Department is also investigating.

China said it’s been invited by the FAA to join a panel to review the 737 Max. China was one of the first countries to ground the American narrow-body jet.

Boeing has spent months refining the 737 Max’s software since data from the Lion Air crash indicated the stall-avoidance system had repeatedly tipped the nose down before pilots lost control. Boeing was close to a software fix when the Ethiopian Airlines jet went down.

Planes usually climb steadily to get safely away from terrain and to reach altitudes where engines burn more efficiently.

“Pilots tried to control the plane repeatedly but were not able to do so,’’ Dagmawit said at the briefing. The plane appeared “very normal” on takeoff and then suffered “repetitive uncommanded nose-down.”

Captain Yared Getachew, in command of the Ethiopian Airlines flight, had amassed more than 8,000 flight hours, according to the airline, while first officer Ahmed Nur Mohammod had spent about 200 hours aloft.

Passengers included 32 Kenyans, 18 Canadians, nine Ethiopians and eight Americans. The United Nations, which was hosting an environmental conference in Nairobi, said it lost 19 staff members in the crash.

While Africa has a generally poor aviation safety record compared with global norms, Ethiopian Airlines is known for operating a modern fleet that features Boeing 787 Dreamliners and the latest Airbus SE A350, as well as the 737 Max.

Africa’s only consistently profitable carrier, Ethiopian has built Addis Ababa into a major hub feeding travelers from around the world into dozens of African cities in competition with rivals such as Dubai-based Emirates.

Boeing designed the 737 Max to deliver a 14 percent fuel-savings to compete with the A320neo from the company’s European rival, Airbus. The use of new, bigger engines required Boeing’s designers to mount the units farther forward on the wings in order to give them proper ground clearance when taking off or landing. That changed the flying characteristics in a way that the engineers thought required the additional system to prevent stalls.

“Is there a structural design problem? No, we cannot characterize it now,” said Amdye Andualem, the investigator in charge, told the news conference. The investigation found no evidence that a foreign object may have struck the plane, he said, adding that the probe would continue for six months or more. 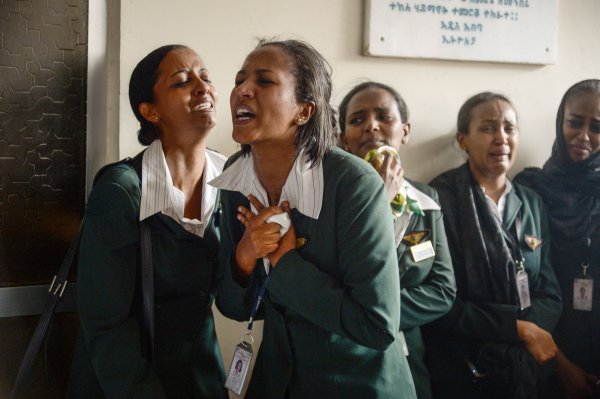 Anti-Stall System Switched on Before 737 MAX Crash: Report
Next Up: Editor's Pick