French filmmaker Claire Denis is one of the unsung geniuses of worldwide cinema. Not everyone knows her name, but the movies she’s made over the past three decades–like the sensuous, evocative 1999 Billy Budd adaptation Beau Travail, or 35 Shots of Rum, from 2008, a drama about makeshift families that reflects the ever changing face of France itself–are so vital and so brazenly varied that you could spend a lifetime splashing in their depths.

Denis’s movies can be imaginative and poetic; sometimes they’re unflinchingly brutal. High Life, her first English-language picture, is all of those things, a work of great beauty that’s also at times difficult to watch. Robert Pattinson stars as Monte, a convicted killer who’s sent into space as part of a futuristic fertility experiment; the scientist-sorceress in charge is Dr. Dibs (Juliette Binoche), a chilly temptress in a lab coat, who happens to harbor her own criminal secret. High Life is a work of dystopian science fiction, unsettling by design: The facility that houses Monte, Dr. Dibs and the other prisoner-subjects (they include André Benjamin–rap luminary André 3000–in a small but potent role) is a drab, cube-like structure, like two shipping containers lashed together, floating dismally through space. But in Denis’s vision–and as shot by cinematographer Yorick Le Saux–it’s an image of stark, lonely beauty, a metaphor for the desolation felt by the misfits locked inside.

High Life is a chilly, ruminative film, brilliant if not exactly likable. But Pattinson, the movie’s thumping heart, is superb: in the opening scene, before we have any scope of what’s going on in this lost-in-space horror lab, we see Monte suited up in space gear, attempting a repair on the ship’s exterior. He’s communicating, by monitor, with a being inside the ship–who happens to be a gurgling infant, the only other human in sight. As the story moves forward, we learn who this baby is and how she and her fellow space traveler are bonded. They’re connected to each other but isolated from the world, and they give us something to cling to as well. Pattinson’s face alone is a star map of tenderness, suspicion and ruthlessness. In this sometimes alienating movie, he lays a trail for us to follow, sticking close by our side right to the end. 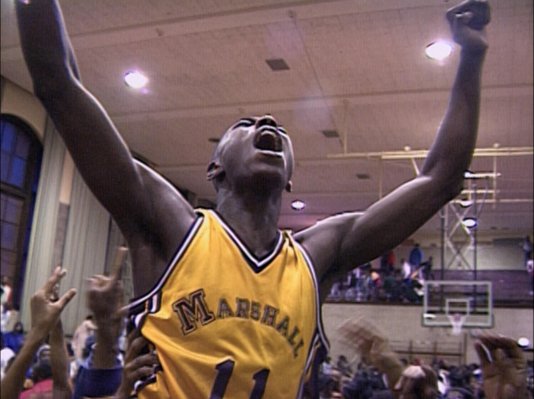 It’s Been 25 Years Since Hoop Dreams Debuted. Here’s How It Changed the Game for Documentaries
Next Up: Editor's Pick