For most of the past decade, TV networks have been trying to replicate Mad Men. (Remember NBC’s The Playboy Club? ABC’s Pan Am?) But these imitators never seemed to understand that beyond the 1960s styling, Mad Men resonated because of its deep insight into creative work and the havoc it can wreak on the personal lives of people who devote themselves to it. So it’s a minor miracle that FX has managed to create something close to Mad Men’s spirit in Fosse/Verdon–a miniseries, premiering on April 9, that shares both its lush midcentury setting and its ambitious themes.

You don’t need to know much about musical theater (I don’t!) to enjoy this eight-episode account of the romantic and professional partnership between legendary choreographer and director Bob Fosse (Sam Rockwell) and triple threat Gwen Verdon (Michelle Williams). Though the show’s nonchronological structure might be confusing at first, viewers are in good hands with a team including Hamilton’s Lin-Manuel Miranda and Thomas Kail, as well as Dear Evan Hansen writer Steven Levenson, whose carefully ordered vignettes examine the relationship from multiple angles.

When they meet, in the mid-’50s, Gwen is the queen of Broadway and Bob is a green choreographer with the gall to make her try out for Damn Yankees; a kinetic audition scene shows them falling in love and discovering their electrifying potential as collaborators at once. But Fosse/Verdon, which spans half a century, concentrates on a period in the early 1970s when the balance of power between the leads shifts. By then, they have a daughter, Nicole (Juliet Brett), and a New York City apartment decorated in haute-bohemian jewel tones and animal prints. Now a director of movies as well as theater, Bob steamrolls his way into helming Cabaret, a smash that wins him an Oscar. At the same time, an aging Gwen struggles to find roles.

Even as his constant infidelity dooms their marriage, Bob–who’s better at talking ingenues into bed than he is at talking producers into trusting his vision–relies on his wife’s charisma and insight behind the scenes. So she keeps helping him, in an uncredited capacity. And the emptiness of success keeps exacerbating his depression and drug abuse.

Yet there’s more to Fosse/Verdon than the familiar story of a saintly woman whose husband passes off her work as his own. Gwen can be a ruthless careerist. In one standout episode, she derails a vacation by incessantly lobbying him to stage Chicago with her as the lead, even though he’s supposed to be resting after a week in a psychiatric hospital. This neediness isn’t about money. Rather, it was work that liberated both Gwen and Bob from traumatic childhoods (which are, frustratingly, condensed into rushed flashbacks meant to show that their pasts still haunt them). And unfortunately for their daughter, who drifts precariously through their adult world, it’s mostly work that continues to give their lives meaning.

Rockwell captures Fosse’s fragility, anguish and passion, his alternate charm and creepiness with women. But, maybe because guys like him predominate in prestige drama, Gwen resonates more. Williams conveys Verdon’s star quality without letting it obscure her steely survivor’s core. In Mad Men terms, the character is Joan (an underestimated single mom), Betty (a betrayed wife rebuilding her life) and Peggy (a woman who’s just as talented and driven as any man in her field) in one.

Gwen is also a genius. And part of the pleasure of Fosse/Verdon is in simply watching her work. Kail has said the show chronicles the “collaboration between a woman who, in her prime, was the greatest dancer of her generation and a man who wanted to be Fred Astaire and was not allowed to be.” This is only as trivializing to Fosse as Fosse was to Verdon. Though it’s more than just a revisionist history, one hopes this elegant miniseries corrects the record. 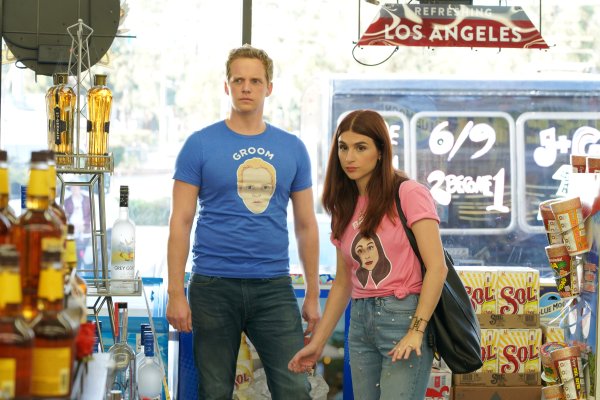 Messily Ever After: Dissecting the 'You're the Worst' Finale
Next Up: Editor's Pick