The Pentagon logo and an American flag are lit up January 3, 2002 in the briefing room of the Pentagon in Arlington, VA.
Alex Wong—Getty Images
By Abby Vesoulis

Gerard Butler’s last action movie was about Navy SEALs rescuing a kidnapped Russian president to prevent World War III. But the least realistic part may have been when the burly Scottish actor stood before a lectern in the Pentagon’s press briefing room to chat about it in October.

Once a staple of military news coverage, the Pentagon press briefing has become a rare occurrence in the Trump Administration.

That’s not because they don’t have anything to talk about, either.

In the last eight months, the Pentagon has lost a Defense Secretary, swapped out six of nine top military commanders, eliminated ISIS territorial control of Iraq and Syria, boosted the air wars over Afghanistan and Somalia, and mourned the combat deaths of at least two troops in Syria and 15 others in Afghanistan.

Experts warn that the lack of regular, open communication between the Pentagon and the press is hurting civilian-military relations.

David Lapan, a former spokesman for the Pentagon and, later, the Department of Homeland Security, told TIME that it raises questions about how the Department of Defense is following its own guiding Principles of Information, which stipulate that standard policy is “to make available timely and accurate information so that the public, the Congress, and the news media may assess and understand the facts about national security and defense strategy.”

“It’s important that the American public understands how their sons and daughters are being used for national defense, how their taxpayer dollars are being used for our national defense,” Lapan says. “The DoD policy doesn’t prescribe how information is going to be released, it doesn’t say you have to do televised press briefings,” he added, “but stopping what had been longstanding practice gives people reason to question why.”

Another former military spokesperson is also worried. The former official, who requested anonymity so that he could be candid, said the diminishing visibility of top Pentagon officials in the five-ring, 29-acre structure is largely attributable to President Donald Trump’s reaction to negative press.

“I’m not trying to defend it, because as a former spokesman myself, I’m a staunch advocate of being as aggressively transparent as possible,” he said, “but there is a case to be made that if you are a federal agency under this administration, with a president that is this hypersensitive about press coverage, and as thin-skinned as he is — for the protection of the institution — it is logical to assume that you’re going to want to be more protective and more quiet and more circumspect about what you’re public on and when you’re public on it.“

One reason top officials are lying low may be that the Trump Administration has a lower threshold for what it deems sensitive information requiring security classification. The other, according to the former spokesperson, is more about maintaining a positive public image than protecting military secrets.

“In this administration, there is a disdain for scrutiny. It is a concerted effort under this particular Commander in Chief, to not only desire less interaction with the press, but to escape any kind of public pressure, to escape public accountability and scrutiny of their decisions,” he said. “One way you can accomplish that is by engaging less with what they consider mainstream media, because mainstream media are going to ask those questions. They’re going to probe those issues.“

For its part, the Department of Defense maintains that it is accessible to the media.

“I think the public can rest assured knowing that we routinely provide journalists with access to information and to defense officials at all levels,” Defense spokesperson Tom Crosson told TIME in an email, adding that the Pentagon still conducts on-the-record press briefings with some regularity, albeit not on air, and that reporters routinely accompany the acting Defense Secretary on work trips. “The Pentagon remains one of the only government agencies who allow nearly unrestricted access to the building for hundreds of credentialed journalists. These reporters also have 24-7 access to a team of press officers to assist with their defense-related questions,” Crosson wrote.

Still, Lapan says that those things are not new substitutes for on-air briefings, but rather longstanding procedures that have been practiced alongside on-air briefings.

Kevin Baron, who has covered the Pentagon for more than a decade, and now serves as the founding executive editor of Defense One, an Atlantic Media publication, says he’s seen a significant shift in the relationship between Pentagon officials and the media since Trump took office.

“Everything changed at the beginning of the Trump Administration when Secretary Mattis came in and very quickly made an effort to keep the military out of politics as much as possible. His way of doing that was to keep himself off of camera, and try to find some sort of happy medium, which he thought would be meeting with reporters in gaggles in their office space outside of the briefing room, off-camera, but on-record,” he said. “On travel, he started taking fewer and fewer reporters. I don’t think the press cabin on the plane has been full in two years.”

That change has consequences, Baron said.

“There’s a much more opaque view of anywhere troops are fighting overseas, especially at the end of the war in Syria now, especially in places like Somalia, Yemen, Niger, Nigeria, Mali, Chad and across the Middle East and North Africa,” he said.

To be sure, the Pentagon is not the only governmental agency keeping the media at bay. Under President Donald Trump, White House press briefings have become shorter and more sporadic. Between January and November 2018, White House press secretary Sarah Sanders gave only 59 press briefings. In comparable periods, Bush press secretary Ari Fleischer held 85 briefings in 2002, and Obama press secretary Robert Gibbs held 95 in 2010, according to an audit reported by the Guardian. While Fleischer’s briefings lasted about 25 minutes and Gibbs’s rounded out an hour, Sanders’ lasted only 15-18 minutes on average.

Crowley hinted that the change was a byproduct of a disconnect between Trump and the Departments for which he’s responsible.

“If we’re not telling our story, somebody is telling it for us. We shouldn’t do that. We shouldn’t allow the enemy, or critics, or people who don’t know to be telling our story,” Lapan said. “That’s why we’ve always thought it’s important to engage with the press, and to get timely and accurate information out to the public so they can understand what we do [and] why we do it.” 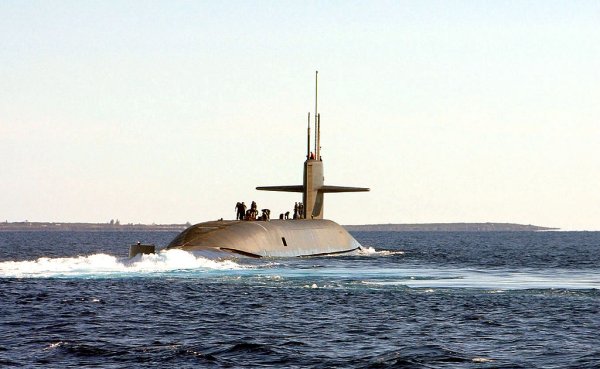 The Navy's New Nuclear Missile Submarines Are Probably Going to Cost More Than $128 Billion
Next Up: Editor's Pick