The Surprising Link Between Cooperation and Individuality

JakeOlimb—Getty Images
Ideas
By Nicholas A. Christakis
Christakis is a physician and sociologist who explores the ancient origins and modern implications of human nature. His new book is Blueprint: The Evolutionary Origins of a Good Society. He directs the Human Nature Lab at Yale University, where he is the Sterling Professor of Social and Natural Science, in the Departments of Sociology, Medicine, Ecology and Evolutionary Biology, Statistics and Data Science, and Biomedical Engineering.

The gunman in the massacre at the mosques in Christchurch, New Zealand on March 15 showed no mercy to the 50 unarmed people, including young children, who he killed in part because he did not see them as fully human.

By some estimates white supremacists were responsible for the majority of the 313 people murdered by extremists in the USA between 2009 and 2018, but they are not the only people driven to murderous rage by tribalism. Overall, the FBI has reported increases in hate crimes of all sorts (based on religion, race, and other attributes) for three years in a row.

Given this sort of hatred and violence, it hardly seems prudent to restrain our inclination for cooperation, which is clearly a virtue. But tribalism and cooperation have arisen from the same evolutionary wellspring. And how exactly we go about enacting our natural cooperative instincts can make the difference between a harmonious society and a disordered one.

Tribalism starts early in life and does not vary much with age, suggesting that the capacity for recognizing group membership is innate. Brain scan studies pinpoint particular regions of the brain devoted to social categorization.[i]

Experiments confirm this. For example, babies observing women who have indicated membership in an arbitrarily assigned group (by proclaiming “I’m a Bem” or “I’m a Tig”) expected these women to help each other if they belonged to the same group. The puzzled infants stared longer when the women did not do so. In another famous experiment, young children who were randomly assigned T-shirts of different colors quickly displayed prejudices (for instance, they judged that children of the other shirt color were less deserving of toys).[ii]

Evolution forged this capacity for tribalism in parallel with cooperation, blending them like an alloy within us. As early as 1906, sociologist William Graham Sumner argued that the propensity for warfare with outsiders actually made it possible to maintain peace within a group, and vice-versa – “brotherhood within, warlikeness without.”[iii]

Both tribalism and cooperation are costly from an evolutionary point of view. People who expend effort to hate other groups, and who get into conflicts with them, should under-perform those who are more peaceful and able to bypass such (potentially lethal) interactions. And people who are altruistic are disadvantaged compared to those who exploit others and free-ride on their efforts.

Detailed mathematical analyses of human evolution that model inter-group interactions show that, because of the foregoing costs, neither tribalism nor cooperation can easily arise on their own. But tribalism and cooperation can indeed emerge from the evolutionary welter if they appear together. In fact, in order to be cooperative, humans had to be able to make distinctions between us and them.

The reason is that selective cooperation within one’s own group is extremely helpful if there is competition between groups for scarce resources. These mathematical models fit with what we known about conflict among contemporary forager groups who live in physically harsh environments with uncertain food supplies.[iv] Groups with cooperative, self-sacrificing members fare better in inter-group competitions.

But cooperation based on tribalism is ill suited to a modern environment, where resources are comparatively much less scarce.

Can we ditch tribalism and still stay cooperative? Fortunately, our evolved psychology has given us another tool to support cooperation that is much less destructive. We have also evolved the capacity to see each other as individuals and to choose our cooperation partners based on who they are and how they have acted rather than which groups they belong to.

In fact, one of the greatest paradoxes about mammalian social life is that the capacity to be a distinctive individual is actually an essential predicate for living socially.

The ability to express and recognize individuality only evolves when it is beneficial, and these two capacities are extremely rare in the animal kingdom. If you do not want others to attack you mistakenly, or to forget that they had sex with you, or to provide parental care to a different child and thus neglect you as an infant, or to neglect to repay your kindness, then it is advantageous to have some way to signal: “This is me, not someone else.”

Such social interactions, in other words – including most especially our ability to recognize people who have cooperated with us in the past – require that we have the ability to communicate our individuality.

In our species, we use our faces for this purpose. Their unique appearance is an evolutionary luxury. Compared to body parts like knees and hands, faces are unusually variable and recognizable. This comes about, in part, because variation in any one trait – nose width, ear shape, cheekbone angle, and so on – is completely independent of variation in other traits, and so they are endlessly re-combinable. New research has revealed the great genotypic variability underlying our facial phenotypes.[v]

Attending to our uniqueness is not only a part of our evolutionary past, but also a prominent part of American history, where the value placed on individuality has always run parallel to the value placed on group solidarity. From our founding principle of “one person, one vote” (grievously misapplied at times, to be sure) to Martin Luther King’s invocation that people be judged as individuals based on the “content of their character,” we have long recognized that people cannot be reduced to their group memberships.

The whole is greater than the sum of its parts. But, without the constituent parts, there is no whole. Cooperative impulses are a key ingredient in all healthy societies. But in a moment when too much tribalism is causing devastating problems, we may require a bit more rugged individualism if we are to work together towards the common good.

Nicholas A. Christakis’ new book is Blueprint: The Evolutionary Origins of a Good Society.

[i] A.V. Shkurko, “Is Social Categorization Based on Relational Ingroup/Outgroup Opposition? A Meta-Analysis,” Social Cognitive and Affective Neuroscience 8 (2013): 870-877. 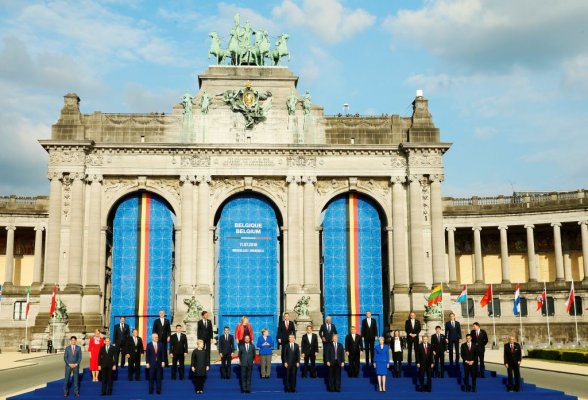 Why NATO Is Essential For World Peace, According to Its Former Commander
Next Up: Editor's Pick