How Shazam! Fits Into the DC Extended Universe Timeline

After nearly 80 years of comic book adventures, the World’s Mightiest Mortal has finally made his big-screen debut in Shazam!

Zachary Levi stars as the titular superhero in the DC Extended Universe’s latest installment, an upbeat origin story that subverts the DCEU’s recent tendency toward gloom and doom. In Shazam!, now in theaters, we learn that 14-year-old foster kid Billy Batson (Asher Angel) was given the ability to transform into an adult superhero (Levi) by an ancient wizard (Djimon Hounsou) who deemed Billy worthy of inheriting his powers. All he has to do to change into his full-grown alter ego is say the wizard’s name — you guessed it — Shazam.

Although Shazam! is ultimately a standalone movie, there are more than enough Easter eggs and callbacks to make fans plenty aware that it takes place in the same universe as previous DCEU offerings like Batman v Superman: Dawn of Justice and Aquaman. In fact, Henry Cavill’s Superman was reportedly slated to make a cameo appearance in Shazam! before scheduling conflicts got in the way.

But where exactly does Shazam! fall on the DCEU timeline? The answer comes thanks to a DC superhero shrine Billy’s foster brother, Freddy Freeman (Jack Dylan Grazer), has set up in their room. Included in the shrine is a Man of Steel-inspired issue of TIME as well as a copy of the fictional Metropolis newspaper The Daily Planet with the headline “Superman Is Back”—letting the audience know that Shazam! takes place after the events of Justice League.

So while Shazam! doesn’t set up any direct connections between Billy and the other DC heroes, since it takes place in the present-day DCEU, there’s no reason why future movies couldn’t. Not to mention that Levi himself has said that he would love to join the Justice League.

“If I ever could be part of Justice League, I will lose my collective s—t,” he recently told the Toronto Sun. “I would be so stoked for that.” 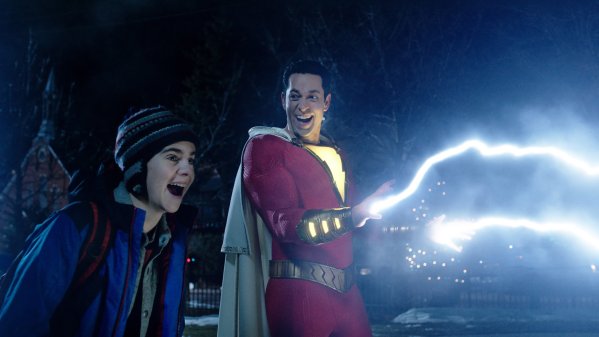 Breaking Down the Shazam! Post-Credits Scenes
Next Up: Editor's Pick