Playwright Suzan-Lori Parks on Engaging With Her Audience: ‘The Spoon-Feeding Times Are Over’

Suzan-Lori Parks is a quadruple threat. The Pulitzer Prize winner is currently in the midst of working in four mediums: theater (her play White Noise is playing now at the Public Theater), film (her adaptation of Native Son premiered at Sundance and airs on HBO this weekend), television (she will serve as the showrunner for National Geographic’s upcoming season of Genius about Aretha Franklin) and music (playing with her group, Suzan-Lori Parks and the Band). She talked to TIME about navigating each medium, adapting classics and how all the world is a stage.

You’ve adapted several American masterworks, most recently Native Son, which is out April 6 on HBO. How intimidating is that process? I find it joyful. With Their Eyes Were Watching God, I basically got to walk in the footsteps of the great one. I felt like I got to hold the hand of Zora Neale Hurston and say, “Sister, what would you like?” Native Son is beautiful and compelling and moving and frightening. Richard Wright already invented the wheel. My job as the adapter is to roll the wheel forward.

Your new play White Noise explores how gaining power and privilege can make you more oppressive. Have you seen that happen in real life?

Yes, and to pretty much most people in this country—black, white or other. We’re not letting the white patriarchy off the hook, okay. But while we point one finger at the white patriarchy, we might notice that three fingers are pointing back at ourselves. How many times have we thrown shade at the bus driver, the teacher, the cashier at the grocery store? How do we use our privilege—whether it’s a college education or just running water—as an oppressive weapon?

Did you write White Noise from your own experiences?

Everything is from my own experience. It’s not like I go out and interview people and then craft my story from their experience. I make it up out of my own grit and stuff. Like Walt Whitman said, I contain multitudes. Every single word in that play that each character says I agree with—and that’s what makes it complicated.

You’re the showrunner for National Geographic’s next season of Genius, about Aretha Franklin. What does she mean to you?

A lot of things. We think of “Respect,” the hits and gospel songs. But she was very private. She had an enormous struggle that she did not put front and center.

Does your approach vary when you write for different media?

When I’m writing a movie, I try to turn on the projector in my head. With a play, I have to be in the room with the characters. I might follow the story as if it were a person and I’m walking after them. They might slip around a corner, and I have to catch them. I’m a visceral, from-my- guts kind of writer. I don’t have ideas, per se. I can tell you the story. But what it means? That’s for the audience.

You famously wrote 365 plays in 365 days. What did it teach you about playwriting?

That plays are always happening—like right now. We’re co- creating the action and dialogue. Like Shakespeare said, all the world’s a stage. I look outside and see kids on the pla ground. That’s a play. There’s scaffolding in front of my window with work- men fixing something. That’s a play too. That’s the beauty of it, and that’s what makes dramatic writing so intense. Because it is our day-to-day; it is us.

You have a Pulitzer Prize, and the New York Times recently named Topdog/Underdog the best American play since Angels in America. What kind of affirmation means the most to you?

The outside affirmation is very important, because it allows me to continue in the public sphere. But it’s not more or less important than the feeling of when I say to myself, “good job.” Friends often say to me, “Are you ever afraid of being found out to be a fraud?” I’ve never had that feeling. When I get an award or an honor, I know I have done the work. I am hacking away at this stuff.

How has black art changed over the 30-plus years you’ve been working?

When I started out, there were only a handful of artists of African descent who were considered avant-garde, to my knowledge. The black community at large was not accepting of stuff that was outside the more traditional forms. August Wilson was the king. He’s an awesome writer. But my writing wasn’t like his, and people didn’t know what to do with me. It’s not that I wanted to be avant-garde— that was just the way my words were coming out.

Now there are more voices who are breaking form, because they realize the form perhaps doesn’t serve the story of the lives we’re living. It’s like way back when, Shakespeare only wrote about kings. Then Arthur Miller comes along, and he writes about people. We have deeply satisfying stories and literature—but they need to be told in a different way.

In what ways is the world of your modern-day Native Son the same as Richard Wright’s 1930s world?

In this version, we have the audacity to imagine that Big [a black man] and Mary [a white woman] could become friends. Yet they don’t have the knowledge of what that might imply.

Say you have two kids, a black kid and a white kid, and they’re both going to the same public school—and they both have a little weed on them. If they get arrested, who’s going to get in trouble more, do you think? Probably the black kid, historically speaking. To the kids walking down the street, it’s like, “We’re equal, we’re friends.” They might be treating each other equally. But the world hasn’t caught up to that.

Are you conscious of the fact much of the audience at your plays is white?

Yes. But they’re ready to do the work. It might still freak them out, but they are excited by the engagement that I’m asking of them. The spoon-feeding times are over. I’m not giving them pablum. My job, to quote James Baldwin [her former teacher], is to make you conscious of the things you don’t see. Because I love you. And because I want all of us, in this country, and on this planet, to succeed. 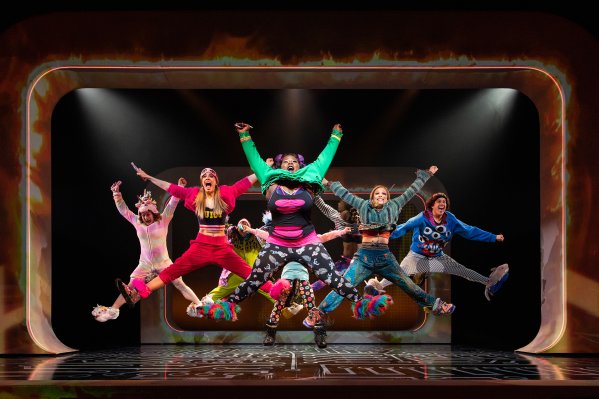 Be More Chill Is a Candy-Colored Musical for the Internet Age
Next Up: Editor's Pick