Time Appears to Have Run Out on the Last Nazi War Crimes Trials. But There Are Other Roads to Justice

At age 95, Johann Rehbogen is almost certainly the world’s oldest juvenile defendant. His World War II service as a guard in Stutthof Concentration Camp in Poland, allege German prosecutors, makes him an accessory to murder in several hundred cases. In November, “Little Boy” — as his peers used to call Rehbogen at the time of his alleged crimes — thus finally stood trial in Germany.

However, as Münster district court announced Wednesday, it had to terminate his trial, as his organs are failing and there is no hope he will become well enough to continue the process.

To be sure, trials of this kind have been initiated for all the right reasons. Those reasons include a commitment to the many victims of the Third Reich and an urge to send a powerful message to would-be perpetrators of mass crimes that they will never get away with murder. As possible defendants age, prosecutors have rushed to bring cases while it’s still possible. And yet, as Rehbogen’s case demonstrates, even if suspected Nazi war criminals still survive, the courtroom trials appear to have run their course. Little could better illustrate the problem than a dying 95-year-old man being tried as a juvenile. It is time to consider alternative forms of bringing about justice and catharsis for those who live in the shadow of the darkest chapters of the last century.

Due to his age at the time of his alleged crimes, prosecutors could only charge Rehbogen under the juvenile penal code — despite the fact that the juvenile justice system exists specifically because of the belief that young people can still be reformed more easily. Until the early 2010s, the creative use of the juvenile penal code would still have been insufficient to bring people like Rehbogen to court. Previously, legal precedent dating back to a 1960s German Supreme Court decision had prohibited the prosecution for murder of Nazi-era suspects unless they could be linked directly to specific killings. And, due to the statute of limitations on crimes other than murder, there was no way to bring cases against them for anything else.

So, in the belief that too little had been done to prosecute Nazi war criminals, German authorities decided to find ways of increasing the number of prosecutions even at a late stage.

Their solution, which the architect of the plan has said was specifically designed to establish a new precedent, was this: Rather than linking defendants to specific acts of killing, it would suffice simply to prove that they willingly had contributed to a machinery of killing. The logic was put to use in the 2009 case against John Demjanjuk, allowing prosecutors to go after a man suspected of being a notorious Nazi guard but against whom there was no direct evidence of a particular murder. Demjanjuk died in 2012 with appeals still pending, but the case opened up a new legal avenue — as a result of which prosecutors are currently preparing cases against women in their 90s who a lifetime ago had worked as switchboard operators in Nazi concentration camps.

Yet, for all the money and efforts poured in recent years into preparing new trials, so far there has only been one successful conviction: that of Oskar Gröning, the “bookkeeper of Auschwitz,” who since has died.

And even his conviction has backfired.

Driven by a desire to prevent something like Auschwitz from ever happening again, Gröning openly gave testimony in TV interviews about his time as an accountant in the death camp. After the legal threshold for conviction was so radically lowered, German authorities turned Gröning’s own TV interviews against him to prove that he had been part of a machinery of death.

As an unintended consequence of Gröning’s conviction, barely any nonagenarians still share their knowledge of Nazi crimes, for fear of how their own words might be turned against them. In short, the honorable German rush of recent years to bring cases against aging people implicated in Nazi crimes has silenced low-level perpetrators and bystanders alike.

It is time to pursue alternative and more promising ways of justice.

A few years ago, I proposed the establishment of Truth Commissions, inspired by the commissions established in South Africa and elsewhere, to bring justice to unresolved Nazi-era crimes. Such government-sponsored commissions would have seen perpetrators, victims and bystanders come together to bring light to unresolved crimes, to reveal the fate of missing victims and to sit judgment on the guilt of perpetrators. Unfortunately, the time for Truth Commissions has now passed too.

Nevertheless, it is not too late to consider other alternative and equally promising ways of dealing with unresolved World War II-era crimes.

Officials in support of continued prosecutions regularly state that we owe it to survivors that justice continues to be served. However, survivors often declare that their main goal in seeking justice is to seek answers rather than legal retribution. Survivors tend to be motivated by an urge to bring light to unresolved and often neglected crimes, as well as to boost Holocaust remembrance and education.

To meet these goals, the most promising way forward at this late stage would be to make use of the insights of restorative justice initiatives, in which perpetrators and victims of a crime face each, other through a mediator, in an attempt to resolve how to deal with the offense and its aftermath. While formal convictions resulting from traditional court cases no longer seem possible, people harmed by Nazi-era crimes and those implicated in them can still be brought into communication with each other. Imagine if people under investigation for their role in Nazi-era crimes were willing, for example, to answer letters from Israeli schoolchildren.

The process of bringing people together would generate media attention focusing on the crimes in question rather than, as is so often the case with these trials, the medical state of defendants. In doing so, it would boost both remembrance and education. This would make it harder for Holocaust deniers to get a hearing and allow for justice still to be served. Such initiatives may also allow us still to access the knowledge people have about crimes for which no paper trail survives. And they may well prove cathartic for victims, perpetrators and bystanders, as well as for the societies in which they have been living.

Such a process would deliver on many of stated goals of survivors — and, considering the advanced ages of the accused Nazis who remain, its results would far longer live on.

Thomas Weber is Professor of History and International Affairs at the University of Aberdeen, and author of the Becoming Hitler. 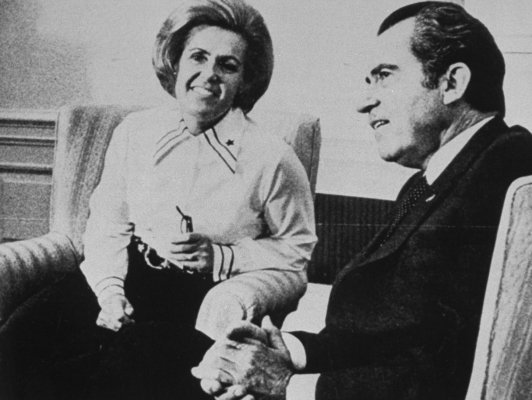 Wives of Vietnam POWs Were Told to Keep Quiet About Their Husbands' Captivity. Here's What Convinced Them to Go Public
Next Up: Editor's Pick