Breaking Down the Shazam! Post-Credits Scenes

A new superhero has officially arrived on scene in the DC Extended Universe and he’s putting a refreshingly lighthearted spin on its frequently grim catalog.

In Shazam!, Asher Angel stars as Billy Batson, a 14-year-old foster kid who is granted powers by an ancient wizard (Djimon Hounsou) and gains the ability to transform into an adult superhero (Zachary Levi) simply by saying the wizard’s name, Shazam.

Levi’s character — who we’re going to refer to as Shazam even though his lack of a suitable superhero name is one of the movie’s running jokes — teams up with his foster brother, Freddy Freeman (Jack Dylan Grazer), to master his newly acquired demigod abilities. But when Doctor Thaddeus Sivana (Mark Strong), a supervillain imbued with the powers of the Seven Deadly Sins, learns of his existence, Shazam realizes that being one of Earth’s most powerful beings isn’t all fun and games.

MORE: Here’s a Complete List of All the Upcoming DC Movies

As with most DCEU and Marvel Cinematic Universe movies, Shazam! features a few post-credits scenes that work to spin the story forward for future films. In this case, there’s both a mid-credits and after-credits scene to keep you in your seat after the not-so-final shot.

Here’s what we learned from Shazam!‘s two post-credits scenes.

Following his defeat at the hands of Shazam and his foster siblings, Doctor Sivana is locked in a prison cell where he spends his time obsessively drawing the symbols that first gave him access to the wizard Shazam’s lair, the Rock of Eternity. That is, until one day he hears someone laughing and a voice informs him that there’s more than one way to gain magic.

The voice is revealed to belong to Mister Mind, a telepathic alien worm who is often associated with the Monster Society of Evil, a sort of second-tier Legion of Doom. Earlier in the movie, we saw Mister Mind trapped in a jar at the Rock of Eternity that is later shown to have been smashed, implying that he escaped and is ready to get back into the business of supervillainy.

“Oh, what fun we’re going to have together,” he tells Sivana. “The Seven Realms are about to be ours.”

If Warner Bros. greenlights a Shazam! sequel, this likely means that Mister Mind — and not, as some fans assumed, Shazam’s comic book archenemy Black Adam — will be the primary villain. Dwayne “The Rock” Johnson is currently slated to play Black Adam in his own solo flick, but according to producer Hiram Garcia, the movie was still in the scripting stage as of August 2018.

In a scene that was teased in some of the movie’s promos, Shazam pretends to be able to talk to his goldfish to trick Freddy into thinking that he has the ability to telepathically communicate with fish. When the jig is up, a laughing Shazam questions what he would even be able to do with that power.

This jokey final sequence functions mostly as a gag, but there’s always a chance that it could also be hinting at an eventual crossover movie. DC fans will just have to wait to find out. 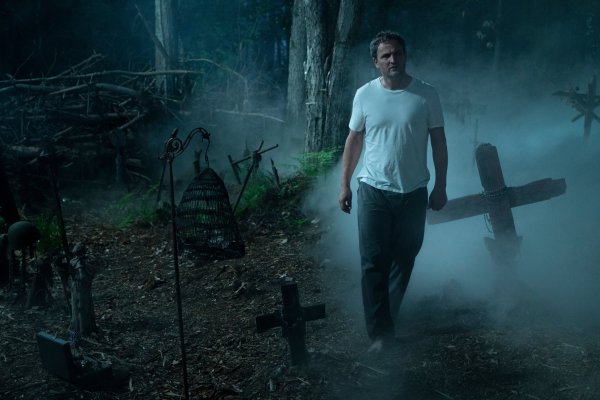 Pet Sematary Tries to Scare But Mostly Fails — Until the Very End
Next Up: Editor's Pick