For the past eight years, Maisie Williams and Sophie Turner have played on-screen sisters Arya and Sansa Stark on HBO’s Game of Thrones and while the show may be coming to an end this season, it doesn’t mean that their special bond will. As the Stark sisters, Arya and Sansa, the pair have weathered some of the most jaw-dropping challenges in Westeros, circumstances that strengthened and deepened their complex relationship; in real life, it appears that Williams and Turner now have a friendship that borders on sisterhood.

From getting matching tattoos together to creating a special hashtag for their time together (#Mophie, a charming portmanteau of their two names), it appears that out of all the alliances made in pursuit of the Iron Throne, this one might be the most longstanding — and certainly the most fun. As for those worried about whether or not the Stark sisters will be able to see each other following the close of Game of Thrones and the arrival of new projects, there’s no need to fret — Williams will be a part of Turner’s wedding party during her nuptials to Joe Jonas in the near future.

Now, as the beloved series enters its eighth and final season, which premieres on April 14, here’s a look back at Williams and Turner’s best moments together.

In a sweet Twitter exchange with a fan who posted a photo of their signatures in a book from 2009, Turner and Williams shared that they had practiced signing their names for days before the book signing, including practicing in a pub for hours ahead of the event.

Over the course of the eight years that Game of Thrones has aired, Turner and Williams have walked their fair share of red carpets together, giving us a plethora of sweet and sassy moments on the red carpet including the notable time that Turner thoughtfully helped fix Williams’ train.

The pair were double trouble on the set of Game of Thrones where they would often try to sneak kisses into the scenes they had with one another, something they told Glamour UK, was done with the goal to “freak everyone out a bit…it kept them on their toes.”

Their commemoration of their unconditional friendship by choosing matching actions

Turner and Williams got the ultimate friendship celebration when they got matching ink together.

They also dressed in matching Halloween costumes in 2016.

In short, the Stark sisters are the Game of Thrones alliance we not only need but deserve.

Arya and Sansa and Sophie and Maisie forever! 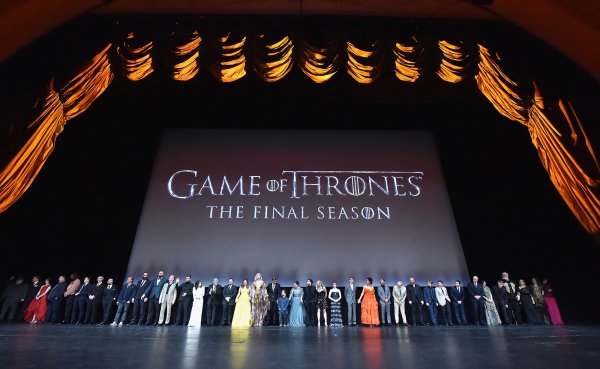 Pretty Much Everyone Who's Ever Been on Game of Thrones Reunited to Get People Choked Up
Next Up: Editor's Pick