It’s Been 25 Years Since Hoop Dreams Debuted. Here’s How It Changed the Game for Documentaries

A scene from "Hoop Dreams."
By Andrew R. Chow

The director Steve James hit hurdle after hurdle while making his documentary film Hoop Dreams, released in 1994. “We had such a hard time raising money,” James told TIME. “We couldn’t get anybody to watch it going into Sundance.”

Twenty-five years later, it is widely considered one of the best documentaries ever made. Roger Ebert—who was one of the film’s early champions and helped it gain momentum at the Sundance Film Festival—called it “the great American documentary.” The International Documentary Association named it the best documentary of all time in a 2007 poll. The three-hour film, which follows two black teenagers in their wearied quest to make it to the NBA, sits in the Library of Congress’ National Film Registry alongside Citizen Kane and The Godfather.

Perhaps more importantly, the film ushered in a new wave in which documentarians, buoyed by newly interested financiers and the opportunity to screen in national theaters, imbued difficult topics with personal warmth, rigorous patience and narrative force. In many ways it is the forebear to the documentary boom happening right now, in which works like Leaving Neverland, Minding the Gap and Surviving R. Kelly are driving national conversations about justice, abuse and equality.

To celebrate its 25th anniversary (the film debuted at Sundance in January and hit theaters in the fall)—as well as March Madness—TIME interviewed several prominent filmmakers on how Hoop Dreams influenced their own work and documentary filmmaking more broadly.

Documentaries are Movies, Too

When Steve James fell in love with film at an early age, he dismissed documentaries as dry and even preachy. “I associated documentaries with social issues—a kind of medicine one would take in classes,” he said. But through exposure to works like Harlan County, USA and the Up series, he realized the genre could wield as much drama as narrative films. When he decided to make his first feature-length film a documentary, he strived to frame the real-life stories of Hoop Dreams with a tension-filled narrative arc and complicated, compelling characters.

The end result, in which the fortunes of teenage basketball players Arthur Agee and William Gates rose and fell in Dickensian twists over a rousing score by Ben Sidran, captivated a younger generation that had attached some of the same stigmas to documentaries that James had. The filmmaker Liz Garbus remembers seeing Hoop Dreams at New York City’s Film Forum after graduating from college. “It crystallized so quickly what I also wanted to do—which was to make hard-hitting films but do them with that real narrative satisfaction,” she told TIME. Four years later she would release The Farm: Angola USA, a gripping examination of six inmates inside the Louisiana State Penitentiary which went on to win an Emmy Award and receive an Oscar nomination.

Lucy Walker saw Hoop Dreams while at film school at New York University and was similarly taken by both its unprecedented access to its subjects and its narrative concision. “I remember being astonished it felt like you really could watch life happening,” she said. “He took very quotidian, non-extraordinary lives and turned them into a riveting, compelling movie.”

Walker remembers studying the film over and over again while filming The Devil’s Playground, in which she embedded in Indiana with Amish teenagers during Rumspringa. In particular, she learned from the way James poignantly captured small moments, like a mother icing a birthday cake, through carefully choreographing his shots and establishing a high level of trust with his subjects. “It speaks to a world of preparation, relationship-building and observation that then becomes a kind of direction,” she said.

Hoop Dreams was not originally intended to be a movie. James and producers Frederick Marx and Peter Gilbert initially envisioned the project as a half-hour special on public television. “Documentaries just weren’t part of the theatrical business in any meaningful way,” James said. While notable exceptions included Madonna: Truth or Dare and Michael Moore’s Roger & Me, documentaries mostly lived either on television or at niche urban theaters like the Film Forum.

But the film proved the exception in 1994, when, following a rave review from Gene Siskel and Robert Ebert and an ensuing frenzy at Sundance, it arrived in theaters across the country and stayed there for months, racking up $7 million. “After Hoop Dreams, I could get a meeting with almost anybody,” Gordon Quinn, the founder of Kartemquin, the production company that produced the film, told TIME.

While the financial impact wasn’t immediate—Quinn said that financiers were mostly interested in funding a Hoop Dreams 2—the national interest in documentaries increased. The next year, two documentaries, Upzipped and Crumb, each cleared more than $2.8 million, cracking the top 10 highest-grossing documentaries ever at the time, according to Box Office Mojo. “The financial success of Hoop Dreams created an environment where there was an appetite for documentaries about people not often represented in mainstream cinema,” Garbus said.

Hoop Dreams altered the finances of documentaries in another key way: It was one of the first feature films to be shot on video as opposed to film. The lower cost of video allowed James to shoot hundreds of hours of material over several years even as funding dried up; the film’s acceptance in the mainstream world allowed future filmmakers to do the same. “You were constrained in the old days of film, which was extremely expensive and extremely precious,” Walker said. “With video, you can shoot to your heart’s content.”

While sports movies like Hoosiers and Field of Dreams were immensely popular at the time of Hoop Dreams’ filming, sports documentaries were scarce. “Documentaries that looked at sports in any way were just considered fluff and not of social importance,” James said.

And though James, Gilbert and Marx shot the film from the perspective of basketball obsessives, the film ran much deeper than its primary subject matter, delving into issues of race, class, family and addiction. Walker likened James’ use of basketball to a macguffin, a narrative device used to propel a plot forward, while the deeper meaning of the movie lies elsewhere. “It was a film about basketball which really wasn’t about basketball,” Garbus said.

Filmmakers took James’ lead, creating a sub-industry of sports documentaries which continues to grow rapidly. Two years after Hoop Dreams, the boxing documentary When We Were Kings won the Oscar for Best Documentary Feature. The ESPN series 30 for 30 has generated over 150 documentaries exploring sports and culture around the world. And the last three Oscar winners for Best Documentary Feature, Free Solo, Icarus and O.J.: Made in America, used figures from sports as lenses to explore broader issues.

Bing Liu was a young child when Hoop Dreams was released. He saw the film for the first time five years ago, and while watching it wasn’t a breakthrough moment for him like it was for Garbus, he began to realize how much it had influenced the norms of his filmmaking generation. James’ exhaustive longitudinal commitment—he shot for more than five years—would become integral to the genre, to the point that “the average time it takes to make an independent documentary is 4 or 5 years,” Liu said. “It wasn’t until much later that I realized that was a huge thing at the time.”

Liu was also reassured by the fact that Hoop Dreams was shot on video, given that he was in the midst of shooting his own film, Minding the Gap, on video. “Seeing a documentary that was so lauded and acclaimed be shot on videotape, said to me as a filmmaker, Oh, the story matters more,” he said.

Minding the Gap was released last year and has a 100% fresh rating on Rotten Tomatoes. It’s easy to see the lineage from Hoop Dreams. The film uses a sport, skateboarding, as an entry point to explore the agonies and joys of young men growing up impoverished in America. Its startling intimacy and honesty is borne out of the filmmaker’s deep connection with his subjects over years of friendship.

And there’s a more literal connection, as well: James and Quinn served as executive producers on the movie, which was produced by Kartemquin. Liu recalled his many conversations with James about the ethics of who gets to tell a story and the foremost importance of forming collaborative relationships with subjects.

For other filmmakers, Hoop Dreams set a gold standard that could be both complicated and challenged. Like the subjects of the film, RaMell Ross was a highly touted basketball prospect. The film’s shadow loomed large both when he strived for the NBA and after he turned toward filmmaking when injuries derailed his career. “Every single athlete or basketball player of my generation had watched the film and thought of documentary in terms of Hoop Dreams,” Ross said in an interview. “They were almost synonymous.”

In his 2018 debut film, Hale County This Morning, This Evening, Ross offered a different perspective on an impoverished black community, delving into intimate moments without the tropes or narratives often imposed by a white gaze. “There’s so much value and truth in his attempt to document black culture at the time,” Ross said of Hoop Dreams; he says he has seen the film at least four times. “With Hale County, I’m trying to extend the conversation and offer other modes without those tropes to show the plurality of truth.”

Minding the Gap and Hale County This Morning, This Evening—both of which were nominated for Oscars this year—arrive in the midst of a documentary renaissance in which the form thrives at the box office and on streaming services, inspiring heated debate on social media and think pieces galore. Last year, Free Solo, Won’t You Be My Neighbor?, RBG and Three Identical Strangers all cleared more than $10 million at the box office. In January, Knock Down the House broke Sundance’s documentary sales record, selling for a reported $10 million to Netflix. The same month, Hulu and Netflix released dueling Fyre Festival documentaries that dominated the cultural discourse for weeks.

Today’s film landscape is vastly different from the one in which Hoop Dreams arrived, with a stunning breadth of subjects and formal approaches to documentary. But so many of them, in some way, carry the DNA of Hoop Dreams, in its commitment to its subjects and empathic lens. In this new golden age of documentary filmmaking, as Walker put it, “You can point to the lineage of [James] more directly than anyone else.”

The original version of this story misstated the Oscar for which the documentary When We Were Kings was nominated. It was nominated for, and won, Best Documentary Feature, not Best Picture. 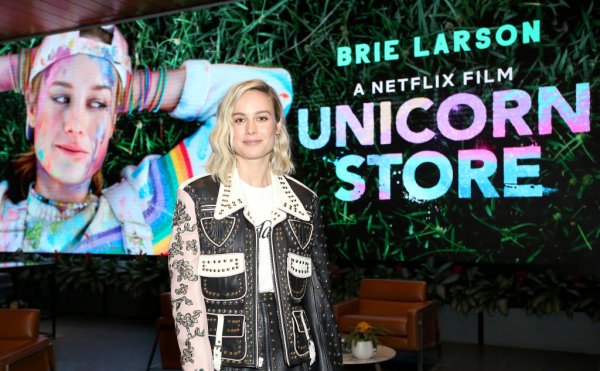 Brie Larson's Directorial Debut Unicorn Store Is Not the Fun Captain Marvel Reunion You've Been Waiting For
Next Up: Editor's Pick