Congressional Democrats are moving forward with investigations into Russian meddling and President Donald Trump’s family, setting the stage for a major legal fight with the Administration.

The House Oversight and Judiciary committees — two of the most powerful — announced Monday that they are preparing subpoenas on Special Counsel Robert Mueller’s report on Russian collusion in the 2016 election and security clearance probes that implicate the president’s family.

Rep. Jerrold Nadler, who chairs the Judiciary committee, said Monday that his committee would mark up a subpoena on April 3 to obtain the full Mueller report. Nadler, along with five chairs of other committees, sent a letter to Attorney General William Barr last week demanding they see the full report by Tuesday, April 2. While Barr said he was working to make the report public as soon as possible, he speculated that would not happen until at least mid-April, past the Democrats’ deadline. (A short summary of the report written by Barr has been made public, but the full report remains private.)

“Attorney General Barr has thus far indicated he will not meet the April 2 deadline set by myself and five other Committee chairs, and refused to work with us to provide the full report, without redactions, to Congress,” Nadler said in a statement Monday. “The Attorney General should reconsider so that we can work together to ensure the maximum transparency of this important report to both Congress and the American people.”

Nadler said he would not officially issue the subpoenas if all the documents were produced. He also did not set a timeline for sending the subpoena for the Mueller report to the Department of Justice.

Less than an hour after Nadler announced his plans, Rep. Elijah Cummings, who chairs the House Oversight committee, released a letter to White House Counsel Pat Cipollone that the committee is set to officially authorize a subpoena on April 2 to depose Carl Kline, who was the personnel security director at the White House for the first two years of the Trump Administration. Cummings said that Kline, who now works at the Department of Defense, has ignored all of the committee’s previous document requests. NBC News reported in January that Kline authorized Kushner’s security clearance over objections from other staffers.

“The Committee will depose Mr. Kline about the security clearance practices in place when he was at the White House, the treatment of specific security clearance adjudications during his tenure, and his interactions with the whistleblower,” Cummings wrote to Cipollone.

The whistleblower who came forward to the committee publicly identified herself as Tricia Newbold, an adjudications manager in the Personnel Security Office. According to NBC News, Newbold, who worked with Kline at the White House, had previously filed a complaint against him with the Equal Employment Opportunity Commission, alleging that he discriminated against her height by placing security files too high for her to reach. NBC News also cited a letter from Newbold to her family in which she stated part of her grievances against Kline stem from his security clearance judgements.

Newbold, who was interviewed by the Oversight committee on March 23, said other White House staffers have retaliated against her for voicing concerns, and that she was suspended without pay in January for 14 days because she would not follow the Administration’s protocols. “I’m terrified of going back. I know that this will not be perceived in favor of my intentions, which is to bring back the integrity of the office,” she told the committee.

According to portions of a transcript released by the committee, Newbold said she had denied security clearances for multiple Trump Administration staffers, only to have those decisions overturned by more senior officials such as Kline. In 2018, she told the committee, she made a list of these staffers. The list included 25 people in total, including two current senior White House officials. Newbold said the office had recommended some White House officials not be granted clearances in part because of concerns about foreign influence.

The White House officials in question were not named in the transcript released by the committee. But the situation Newbold describes closely hews to January’s NBC News report about Kushner.

The committee launched an investigation in January into the White House’s security clearance processes, shortly after Cummings became chairman. In explaining the investigation, Cummings described how both Kushner and former National Security Advisor Michael Flynn were able to obtain clearances, despite the fact that both men failed to disclose their contacts with Russian officials.

Cummings released a letter from Cipollone last month showing that the White House was unwilling to cooperate with the probe. Cipollone described the committee’s requests as “unprecedented and extraordinarily intrusive.”

While Cummings sent Cipollone a list of other witnesses the committee is seeking to interview, Kline is the only person for whom they will authorize a subpoena at the moment. 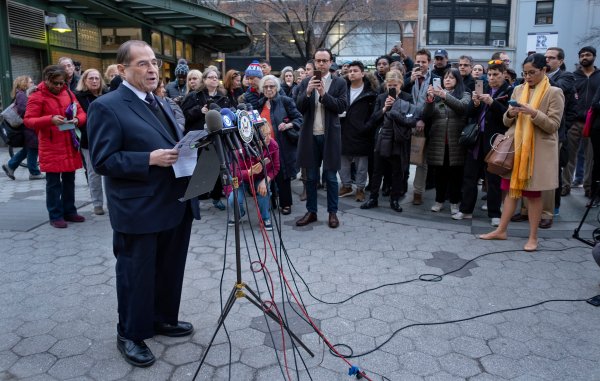 How Democrats Are Planning for Life After Mueller
Next Up: Editor's Pick