Theresa May Is Resigning as U.K. Prime Minister Next Month. Here's Who's Likely to Replace Her

Theresa May announced on Friday she would resign as leader of the U.K.’s ruling Conservative Party on June 7, after her last-ditch attempt to secure support for her Brexit deal collapsed leaving her isolated in 10 Downing Street.

May will stay on as Prime Minister until a new leader of the Conservative Party is elected, in a process that could be either long or short depending on how many hats are thrown into the ring, but will conclude some time in the summer.

There is a packed field of candidates to replace May. The contest will be an internal process in the ruling Conservative Party, as opposed to a national ballot, meaning a new party leader could take over without a general election having to be held. That’s because Britain is a parliamentary rather than a presidential system, so whoever leads the largest party in Parliament becomes the prime minister.

The rules of the process will have a bearing on the final result. Candidates will be whittled down, in a series of votes, to two candidates by Conservative lawmakers in the coming weeks. The final two left standing will then be put to party members for a vote.

The rank-and-file membership of the Conservative Party is staunchly pro-Brexit, and analysts agree that a hardline candidate would win against a moderate in the final vote. Whether that can be avoided will depend on the voting choices of Conservative lawmakers in the early rounds of voting.

Here are the leading candidates who could replace Theresa May as U.K. Prime Minister.

Somehow, the former Foreign Secretary, who resigned from May’s cabinet last year over her Brexit deal before agreeing to back it after May offered to resign, is still the frontrunner to succeed the prime minister. In a recent YouGov poll, 39% of party members ranked him their first choice.

A campaigner on the “Leave” side in the 2016 referendum, (who famously wrote two op-ed columns, one for leave and one for remain, while deciding which side to support,) Johnson is regarded by many in his own party as a political opportunist. “He is widely seen as dishonest, disloyal, and not a team player by his colleagues,” says Tim Bale, professor of politics at Queen Mary, University of London. “On the flip side, he has this celebrity status and might be able to appeal to people that haven’t traditionally voted Conservative”.

Johnson is also seen as the favorite of the Conservative Party membership, which ultimately has the final say between the final two candidates on the ballot after lawmakers whittle down the field. “He is the darling of members. But he’s not the darling of MPs,” says Tony Travers, professor of politics at the London School of Economics. “That’s his weakness.”

Johnson’s opponents in the party have said they would likely coalesce behind a “Stop Boris” candidate in order to prevent members from getting the chance to vote for him.

Gove, the current Environment Secretary, was another of the most prominent figures on the “leave” side of the 2016 referendum. He might just be that “Stop Boris” candidate – indeed, he has been before. After David Cameron resigned as Prime Minister in the wake of the 2016 Brexit referendum, he offered to run Johnson’s leadership campaign, but stood down at the last minute to run against him, splitting the pro-leave vote and opening the way for May to take the top job.

Gove is a good parliamentary performer, an experienced minister and is widely seen as a “safe pair of hands.” In his current job, Gove has been one of May’s most reliable allies — quite the distinction in an era of unprecedented cabinet indiscipline. That may or may not hurt his chances in an upcoming contest. “He will probably do quite well among Brexit activists,” says Travers.

The current Foreign Secretary, Hunt has long been a loyal backer of May’s Brexit deal. But unlike Johnson and Gove, he campaigned for the remain side in the 2016 referendum. Like May herself, he had a change of heart after the referendum, arguing that the government must secure an “orderly” Brexit.

“He has clearly been on maneuvers positioning himself as a sane, moderate, recognizable kind of Conservative politician,” says Travers. But talk among Conservative Party members is that May’s change of heart from “remain” to “leave” is to blame for her political failure to deliver Brexit. In that context, a Hunt bid for the prime-ministership might be seen as a long shot.

Now the Home Secretary, Javid is a relatively new face in government, but has been seen by colleagues as having leadership potential for some time. The fact he voted remain in the referendum could work against him, but like May and Hunt he has come around to the leave side.

As Home Secretary he has taken a hard line on migration – a key issue in the referendum. He has, for example, revoked the citizenship of “ISIS bride” Shamima Begum, and cut his 2018 Christmas holiday short to return to the U.K. amid reports of migrants crossing the English Channel.

Raab, a former Brexit Secretary who also resigned from May’s government to vote against her deal, is another candidate who the Brexit-supporting wing of the Conservative Party sees as a viable replacement for May. Like Johnson, he originally criticized May’s deal but voted for it after she promised to resign.

Unlike Johnson, he has a black belt in Karate. That tougher image was bolstered in March, when Raab said the U.K. must be prepared to leave the E.U. without a deal. “He’s quite radical,” says Travers. “But after all that’s happened, MPs might not want anything too radical, given all of the problems they’ve had.” In the end, the biggest factor working against him could be convincing enough colleagues to vote for him. “He’s not a people person,” says Bale.

Leadsom resigned as leader of the House of Commons on Wednesday, positioning herself well for the upcoming leadership race. She has been a longtime Brexit-supporter, and was the last candidate standing against Theresa May in the 2016 leadership race (she stood aside before it came to a vote). “She would certainly fight for territory with Boris in many ways,” says Travers. “She’s an ardent Brexiteer, she was tough on the issue, and she’s seen as more of an operator than Boris – an operator politically, rather than just in her own interests.” She might be another viable “Stop Boris” candidate.

Recently promoted to the position of Defense Secretary (becoming the first woman to ever occupy the role,) Mordaunt’s stock has risen considerably. She ticks many boxes: she campaigned to leave the E.U. in the 2016 referendum, she is widely seen as a competent minister, and many colleagues believe her temperament will resonate better with voters compared to Theresa May. She may be relatively inexperienced compared to her opponents, but could play a kingmaker role if she doesn’t run for the top job. 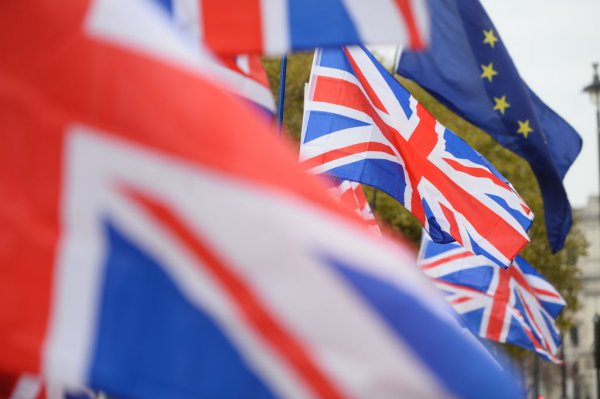 Your Top Questions on Brexit, Answered
Next Up: Editor's Pick