Women earn less than men in almost every occupation.

Whether you’re a real estate broker or a registered nurse, a financial manager or a teacher, odds are you’re getting paid less if you’re a woman. On average, women made about 80.5% of what a man makes for full-time, year-round work in 2017, and even less if you’re an African American, Latin or Native American woman.

Even if you account for differences between men and women’s occupations, marital status, college major, hours worked and other criteria, women still earn about 7% less than men one year after graduating from college, according to analysis by the nonprofit American Association of University Women. Ten years after college, that gap jumps to 12%.

That average pay gap is recognized on Equal Pay Day, which takes place April 2 in 2019, a day that symbolizes how long into the year the average woman must work earn as much as the average man did in 2018.

Salary negotiations can be more difficult for women for a number of reasons, but not receiving equal pay can have far-reaching repercussions. Women are increasingly likely to be breadwinners for their families, and are more likely to experience poverty. Earning less can also impact when you’re able to retire and the pension you receive.

As the #MeToo movement has stoked the discourse about sexual harassment and discrimination, women have also become increasingly vocal about the importance of fair pay. Celebrities including Jennifer Lawrence have spoken about their struggle for pay equity and the importance of negotiation. Last fall, Google employees walked out of their offices, demanding pay equity and better handling of sexual misconduct.

Here’s what to do if you learn you’re being paid less than a male colleague for the same work.

The first step when you suspect you’re the victim of a gender pay gap should be to get a clear idea of what other people are getting paid for similar work in your profession, your region or your office, Sara Laschever, the co-author of Ask For It: How Women Can Use the Power of Negotiating to Get What They Really Want, tells TIME.

Laschever says websites like Monster, Payscale and Glassdoor can help you learn about comparable pay for their location and job title. Also, you should talk to friends, colleagues—and even use your college or university’s alumni network—to get a better understanding at the market.

Then, Laschever says, you should assemble facts about your own work, such as sales records, in order to prove your accomplishments.

“They have to go in armed with a lot of data and information demonstrating they have achieved a lot,” Laschever says.

Sallie Krawcheck, the co-founder and CEO of women’s investment platform Ellevest, says you should consider approaching your boss or human resources department and asking, “How am I being paid compared to others. How should I think about it?”

Before jumping to conclusions about whether you’re the victim of a gender pay gap, you should determine whether there’s a clear reason, such as not meeting sales goals, for why you’re being paid less than your colleagues, Krawcheck says.

You should also consider asking whether there’s a a clear path for advancement at the company and whether you can adjust your work to improve your salary, she adds.

“Our society has put such a stigma—for women—about talking about money,” Krawcheck says. “But we have to break through that.”

Before you start talking about wages at your office, you should check whether your company has a policy against discussing salaries, says Deborah J. Vagins, senior director of public policy at the American Association of University Women.

“The first thing you should do is check your company’s policies, and see if there’s a punishment for discussing wages,” Vagins says.

Next, you should should also consider if there are specific laws in you state to protect you from retribution, Vagins says.

Krawcheck argues that negotiation is an important tool for women to ensure pay equity. However, research suggests that women are more likely to be penalized if they take the lead in negotiations.

“I wouldn’t say, be aggressive. I hate to even say this, because I want to say, ‘Be yourself! Go you! Go you, let it all hang out,'” says Krawcheck, who describes salary negotiations for women as a “double-bind.” “When we are too soft we get rolled over and when we get too aggressive we’re labeled bitches. It’s this narrow, narrow knife’s edge we must dance along to be uncontroversial.”

Krawcheck advises that when you approach your boss, you should view the process as a collaboration.

“I found what works for me to be fact-based, unemotional,” she says. “Approach it as a collaborative problem to be solved. Because if you are not paid what you should be, the company risks losing you.”

Laschever advises that you should try to emphasize how better pay would be good for the company, and would make you more productive. Going in armed with information about your successes, such as your sales records, can make your argument more convincing.

If you are are nervous about negotiating, you should consider hiring a career coach or grabbing a friend or colleague to practice, Laschever suggests.

Sometimes you can be more blunt about a salary discrepancy, Krawcheck says, but only if you think your boss is the kind of person who will be receptive.

What if negotiation doesn’t work?

If your boss isn’t receptive to negotiation, it might be time for you to consider finding another job.

“I hate to say it. But sometimes you have to leave,” says Krawcheck. “I think this is where the media has empowered us that we can fix this. The sort of breezy, ‘You can do this. You go girl,’ when the harsh reality is that just doesn’t often work. If it was that easy, ‘Ask for the raise like this. Do it like this,’ we would’ve done it. Some of this stuff is so deep-seated.”

“For you to be the first senior vice president in your company, it just feels a little late,” Krawcheck says. “It’s a lot easier to be successful at a company with demonstrated success in advancing the success of women and people with a range of differences, than to be the first one. I say this as someone who was the first one.”

What are your legal options?

Terry O’Neill, executive director of the National Employment Lawyers Association, says you should know that you have rights if you’re facing a pay gap with your male colleagues.

The Equal Pay Act of 1963 requires that men and women receive equal pay for work that requires the same level of skill, effort and responsibility. “Employers are not allowed to pay women less for the same work than what they pay men,” says O’Neill.

Women who can prove that they’re being discriminated against may be able to win back pay for the promotion they missed out on; get reinstated if they were fired; receive compensatory damages; and even win punitive damages, says O’Neill.

O’Neill emphasizes if you are thinking about legal action, you should consult with an employment lawyer to determine the strength of your case. She warns that many cases are an “uphill battle” and that it’s “notoriously difficult” to prevent retaliation by your employer.

Laschever says that the payout may not always be worth the risk. “Is it worth damaging your relationship in the profession by being branded a troublemaker? Unfortunately, often the answer is no,” she says.

Many employees who have successfully won money from their employers have pursued class action lawsuits. Class action lawsuits can empower employees, including those with lower incomes, because they can reduce costs for individuals and help to reveal evidence for a larger pattern of misbehavior at a company, says O’Neill. Employers also may be more nervous about these types of lawsuits because they can generate bad press for a company.

Increasingly, however, companies have included private arbitration agreements in employment contracts, which means that employees may be barred from joining in class action lawsuits. On average, O’Neill says, employees are less likely to win in arbitration than in court.

What companies should do

Although the narrative about the gender pay gap often emphasizes what women are doing wrong, Krawcheck argues that companies should consider what they can be doing better. The only way to determine whether women and men are paid equally, she says, is to compare the salaries and career trajectories of employees at your company.

“The number one reason that Millennial women leave is not for greater flexibility, not to have babies – it’s for more money,” Krawcheck says. “Even if you don’t want to admit it, your competitors who are smart enough will figure this out and steal your talent.” 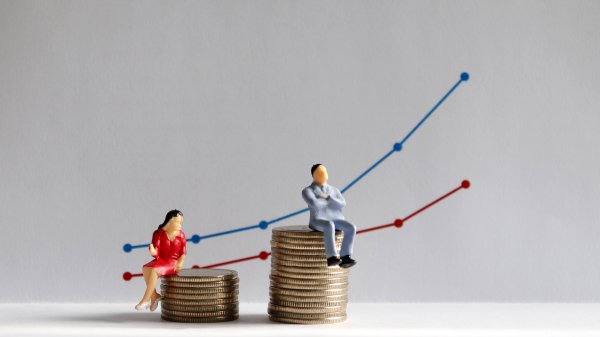 Nearly Half of Men Believe the Pay Gap Is 'Made Up'
Next Up: Editor's Pick