Simone Biles Tells Priyanka Chopra What Made Her Who She Is

Priyanka Chopra asks inspirational individuals to share their wisdom in a new YouTube series, 'If I Could Tell You Just One Thing.'
YouTube
By Rachel E. Greenspan

Priyanka Chopra shares a new side of herself in her new YouTube Originals series, If I Could Tell You Just One Thing, streaming on her personal YouTube channel.

The celebrated actor interviews successful women from different backgrounds and in different fields to have them do just what the show’s title says: tell her just one thing.

Olympic gymnast Simone Biles, actor and comedian Awkwafina and fashion designer Diane von Furstenburg each shared their most important pieces of advice in the show’s first episode, but one mantra — and Chopra’s response to it — stood out from the rest.

In her conversation with Biles, who won four gold medals in the 2016 Summer Olympics, Chopra asked about her experience as a survivor of former doctor Larry Nassar’s sexual abuse and the pressure she felt as an athlete. Biles’ most important piece of advice? “Risk-taking,” she said. “Even in 2018, I took a lot of risks and I did things that terrified me. It made me realize who I was as a person.”

Awkwafina told Chopra about growing up after the death of her mother — and how that’s what led her to discover her talent for making people laugh. “I didn’t like to be this emblem of sorrow for people,” she said. “I wanted people to be happy, I wanted them to feel joy.”

Later in the episode, von Furstenberg, made famous for the iconic wrap dress she debuted in 1974, had one clear instruction. “Have children,” she told Chopra, who laughed hysterically before responding with, “I want to. It’s not like I don’t want to.”

Von Furstenberg went on to share more advice. “The most important relationship in life is the one you have with yourself,” she said. “There’s no other advice that is more important than that.”

The 72-year-old’s wisdom didn’t end there, though. Von Furstenberg said she wants to use her platform to help women live more like she’s lived all these decades. “I want to use my voice to tell all women that they, too, can be the woman they want to be,” she told Chopra. “Because I’ve never met a woman who’s not strong. They don’t exist.” 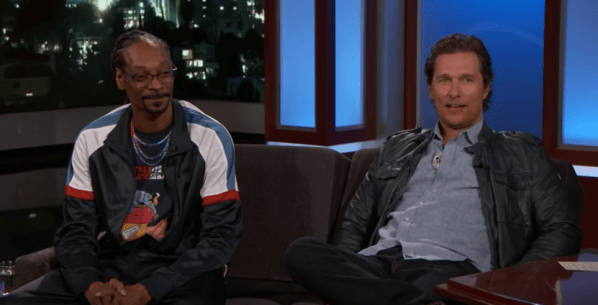 'Meant for Each Other.' Snoop Dogg and Matthew McConaughey Have the Most Delightful Friendship
Next Up: Editor's Pick