The first Muslim woman to join the Pennsylvania House has spoken out against an opening prayer given before her induction that was rife with numerous references to Jesus, Christianity and politics.

Movita Johnson-Harrell, a Democratic representative from Philadelphia, was sworn in to office following an invocation from Rep. Stephanie Borowicz, a Republican from Clinton County. Johnson-Harrell described the content of the prayer as a “political statement.”

Borowicz’s prayer, which ran for a little under two minutes, mentioned “Jesus” 13 times, “God” six times and “Lord” four times. She also heralded President Donald Trump in the prayer over his support for Israel.

“At the name of Jesus, every knee will bow, and every tongue will confess, Jesus, that you are Lord,” she said in the prayer.

The verse “every knee will bow, and every tongue will confess” is often cited by Christians who argue that Christianity is the one true faith.

“God forgive us. Jesus, we’ve lost sight of you,” Borowicz said at another point. “We’ve forgotten you, God, and our country. And we’re asking you to forgive us.”

She continued: “Jesus, you are our only hope.”

It is common for the Pennsylvania House to open its sessions with a prayer. While religious leaders typically gave the prayers in the past, a federal judge ruled last year non-theists are allowed deliver invocations. The Pennsylvania Capital-Star reports that after the ruling, the House has used lawmakers to give the prayer.

Borowicz’s prayer drew immediate condemnation. Toward the end of her invocation, another representative could be heard objecting. After Republican House Speaker Mike Turzai briefly touched Borowicz’s arm, she quickly wrapped up the prayer.

Johnson-Harrell, who became the first Muslim woman to join the House, posted a video on Facebook showing her speaking to reporters. In the video she describes Borowicz’s prayer as “directly a political statement.” She did not immediately respond to a request for comment from TIME.

“I thought that was political bit I also thought it was a political statement when she talked about how everyone will bow their knee, and talking about how if people are not Christian that they’re condemned,” Johnson-Harrell said in the video. “It was directly a political statement, and I think we need to be very, very clear that everybody in this House matters, whether they’re Christian, Muslim or Jew, and that we cannot use these issues to tear each other down. And not only that, it was made during my swearing in.”

In a statement to the Capital-Star, Johnson-Harrell said the prayer “blatantly represented the Islamophobia that exists among some leaders — leaders that are supposed to represent the people.” She said she brought 55 guests to her swearing-in ceremony, the majority of whom were Muslim.

Borowicz was “intentionally being offensive,” Johnson-Harrell told Philadelphia public radio station WHYY. The prayer was further hurtful because, she said, Muslims “actually believe that Jesus was a prophet. Muslims understand the significance of Jesus in this world and in our own personal lives.”

Borowicz, who did not immediately respond to a request for comment, told the PLS Reporter, “That’s how I pray everyday.” 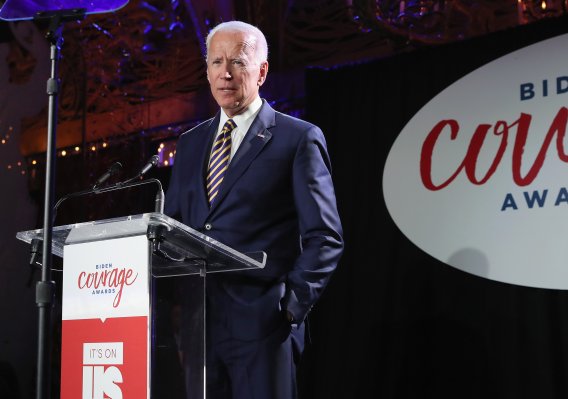 Joe Biden Says He Regrets Not Giving Anita Hill the 'Hearing She Deserved'
Next Up: Editor's Pick