Among the many wonders in Netflix’s new wildlife documentary series Our Planet, arguably the most awe-inspiring is a scene where almost no animals appear at all.

In this exclusive clip from the show, which premieres April 5, cameras catch the moment when a chunk of ice the size of a skyscraper breaks off the Store Glacier in Greenland and tumbles into the ocean. As seabirds circle in the foreground, 75 million tons of crystalline ice cascade into the water below. “Glaciers have always released ice into the ocean,” says narrator David Attenborough. “But now this is happening nearly twice as fast as it did ten years ago.”

Our Planet, produced by the makers of Planet Earth in conjunction with the conservation NGO the Worldwide Fund for Nature (WWF), offers viewers a panoramic perspective of the globe’s many different biomes, filmed in 50 countries over four years. Designed to inform as well as entertain, the series shows us the majesty and marvels of the planet — and tells us what we stand to lose if we don’t act to preserve it.

Attenborough spoke to TIME for this week’s print edition about his seven-decade career and his renewed attempts to raise awareness about our planet’s vulnerability to the changing climate. “It is important, and it is true, and it is happening, and it is an impending disaster,” he says.

Find out more about Our Planet here 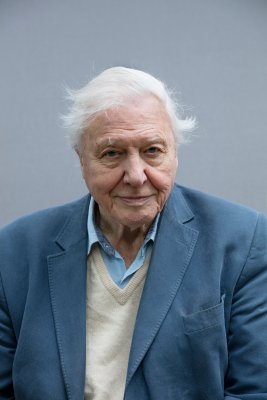 David Attenborough Isn't Sure We Can Save the Natural World. But at 92, He's Not Giving Up Trying
Next Up: Editor's Pick