This African Country Has Had a Yearlong Ban on Social Media. Here's What's Behind the Blackout

When 35-year-old doctor Didier Lalaye went back to his home country of Chad, it wasn’t long before he became frustrated. He couldn’t open the files on his computer, he couldn’t communicate with his university back in the Dutch city of Utrecht, or even Skype friends or family. “It just makes life really difficult,” he tells TIME. “People have complained, but nothing has changed.”

It’s been one year since access to social media platforms and messaging apps, including Facebook, Twitter, WhatsApp and Viber, was blocked in Chad’s latest example of internet censorship. Initially, mobile operators attributed the problems to technical issues, but have since disclosed that the block was ordered by the government led by President Idriss Déby, according to observers. Leading the central African nation of 14.9 million people for almost 30 years, Déby was controversially re-elected in 2016, with a similar online blackout lasting for eight months following his victory. This time round, controls over the Internet appear to have started after proposed constitutional changes were agreed at a conference in March 2018, allowing 66 year old Déby to remain in power until 2033.

The situation in Chad is just one example of how dictatorial governments in the region and beyond are denying citizens access to online information out of fear of uprisings and rebellion. In China, for instance, tight controls are a hallmark of the ruling regime, where state censors constantly monitor social media sites for posts deemed incendiary or subversive. Meanwhile in Russia, President Vladimir Putin recently signed two new bills into law allowing authorities greater control over the web.

The kind of shutdown on social media networks and Internet access going on in Chad has “become the new normal in this part of the world,” says Alain Kemba Didah, an executive board member of Internet Without Borders in Chad, an international monitoring organization dedicated to promoting the free flow of information and defending digital rights. Kemba Didah also points out that even though it is only social media and messaging apps that have been targeted, most of the Internet traffic in the country is actually routed through these sites, therefore affecting the broader ability to access information.

While Chad has kept its censorship controls in place for a unusually long time in the region, 2019 has seen several other governments take different short-term measures to increase their grip on the flow of information. In the Democratic Republic of Congo, the Internet was completely blocked for 20 days in January ahead of contested presidential elections. That same month, Gabon’s Internet and broadcasting services were shut down for 28 hours as the army attempted a political coup, and Zimbabwe’s government ordered two Internet blockouts in the space of a week during civilian protests sparked by a rise in fuel prices. “These bad practices are spreading to prevent populations who aspire to live in a more just and democratic society from expressing themselves,” Kemba Didah tells TIME.

A former army chief who seized power in Chad in 1990, Déby is one of several long-ruling African leaders with a tendency to silence dissent. A new report positions him among leaders such as Sudan’s Omar al Bashir, Uganda’s Yoweri Museveni and Cameroon’s Paul Biya as regional heads who have been in power for decades, silencing opposition voices, cracking down on press freedom and ordering Internet shutdowns as the years have passed.

Only 5% of Chad’s population numbering some 750,000 people, have access to the Internet, according to a 2018 report monitoring Internet use and access around the world. However, the same report reveals that the country’s Internet use is growing particularly fast — its rate of growth is eighth highest in the world, rising by 90% since 2017. The surge in access to information is likely fueling the government’s desire to suppress it — Chad is classified as one of the most authoritarian regimes in the world. The country has never had free and fair elections, corruption within Déby’s inner circle is rampant and demonstrations thought to be critical of the government are banned.

Social media is often crucial to the organizing of such protests, as seen in the 2011 Arab Spring uprisings and the recent protests in Algeria against President Abdelaziz Bouteflika’s bid for a fifth term. “Controlling the Internet is a way to curtail opposition,” says Mirjam de Bruijn, Professor of Citizenship and Identities in Africa at Leiden University in the Netherlands. “After elections [in Chad] in 2016, it was clear that the Internet played a huge role in the way that protests grew overnight and how people had access to what was going on in the region.”

De Bruijn says the current year-long blackout is affecting the country’s urban youth the most, as the potential for entrepreneurship and communication via social media represents both a loss of money and a loss of opportunity. “It’s not a clever decision for a developing country,” she tells TIME. By Internet Without Borders’ estimate, the 2016 social media blackout in Chad resulted in a $20 million loss to the country’s economy.

France's president Emmanuel Macron (L) is welcomed by Chad's president Idriss Deby upon his arrival at the international airport of N'Djamena on December 22, 2018.
Ludovic Marin—AFP/Getty Images

Despite Déby’s slide into authoritarianism, he occupies a sensitive position in the Sahel, an arid sub-Saharan strip of land increasingly targeted by jihadist militias — and seems to have thus far escaped criticism from the international community. Seen by western leaders as a strong ruler with a big army, as well as a contributor to United Nations missions in the region, Déby is well positioned to lead Chad in the fight against jihadism and Islamic extremism in the region. Its membership of the U.S. and France-backed G5 Sahel Joint Force, a group of countries affected by al-Qaeda and ISIS-linked attacks, means that other nations are also invested in Chad’s stability. “If Chad turns into chaos, that’s a huge problem,” de Bruijn says. “And so he is kept in power, but on the other hand, he is impoverishing his people.”

Being deprived of access to information isn’t the only problem Chadians face, as doctor and poet Lalaye points out. Challenges affecting the country include workers’ strikes, high levels of hunger and poverty, and hosting an influx of displaced refugees from the Sahel. “People are really angry for so many reasons, but they are unable to express it. People aren’t allowed to demonstrate,” he says.

Lalaye, like most observers, isn’t optimistic about the restoration of full access to the Internet. “I think we’ll still spend more months or even years without social media.” Many in the region will just be hoping other African leaders won’t continue to follow Déby’s lead. 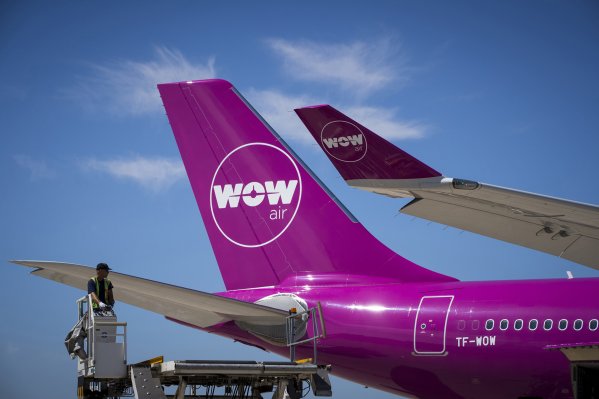 Wow Air Just Suddenly Canceled All Flights. Here's What Travelers Can Do
Next Up: Editor's Pick