NASA has long had a gender problem. The space agency that launched its first man into space in 1961 did not fly the first woman — astronaut Sally Ride — until 1983. Since then, more than 40 other American women have followed. It’s a figure that still compares poorly with the 300-some men who have earned their space wings, but the astronaut corps is at least sufficiently co-ed that the term “manned spaceflight” has finally been replaced with the gender-neutral “crewed.”

One gender barrier that hasn’t been broken, however, is the all-female spacewalk, or “extravehicular activity” (EVA). While women have gone on spacewalks many times before, there’s never been a multiple-astronaut EVA involving solely women. That was finally supposed to change this Friday, when astronauts Christina Koch and Anne McClain were set to venture outside the International Space Station (ISS) to upgrade batteries on the station’s solar panels. On Monday, however, NASA announced that the plan had changed. An EVA will go ahead as scheduled, but male astronaut Nick Hague, who just conducted a spacewalk with McClain on March 22, will accompany Koch instead of McClain. The reason: There were not enough spacesuits aboard the station in the proper size for both women.

There was immediate grumbling online about lingering institutional sexism at NASA, as well as more than a little humor. “Welcome to the space episode of ‘Crap we’ve always had to deal with,” wrote one female commentator online. Hillary Clinton tweeted succinctly: “Make another suit.”

But while the change in plans was certainly a disappointment, there was less to it than some critics have suggested.

For starters, the fact that the all-female spacewalk was supposed to happen in the first place was less a function of trying to make history than simply a question of which astronauts were expected to be aboard the station when future EVAs were scheduled.

“It just wasn’t something that jumped out at us, because it all starts here with competence and abilities,” said NASA ISS Mission Operations Integration Manager Kenny Todd in a press briefing when the walk was first announced. “That’s got to be the core of how we start something.”

Equipment matters, too, however. EVA suits—technically known as EMUs, for extravehicular mobility units—are modular in design. That is, gloves, helmet, boots and the upper and lower halves of the suits are all compatible, so that they can be mixed and matched according to the shape of each particular astronaut. There are six upper torsos aboard the station—two extra large, two large and two medium—but only one of the mediums and one of the extra larges are currently configured for spacewalks. (The suits aren’t designed differently for men and women.) Each EMU also needs a portable life support system.

During the March 22 EVA, both McClain and Hague wore large suits. Although McClain had trained in a large suit on the ground and found it comfortable, in space it proved too cumbersome.

That kind of change in fit from Earth to orbit is not uncommon. The Neutral Buoyancy Lab—the giant swimming pool in which astronauts train for spacewalks—does an imperfect job of simulating real zero-gravity conditions, and there’s no way of determining which suit actually works best in space until a crew member uses it for real. What’s more, astronauts can temporarily grow by as much as two inches in space, as the absence of gravity allows the spine to stretch and relax. That can work its own mischief with fit.

For the planned March 29 EVA, both McClain and Koch would need a medium suit. But with only one available, Koch, who had not yet walked, is set to get her turn.

The relative last-minute change is a reflection of NASA’s nimbleness, with crew members in some ways as modular as the suits, able to rotate into and out of assignments as needs arise. But the spacesuits themselves are a growing headache for the agency. The technology behind them is old—developed in the 1970s—and while there were originally 18 portable life support systems built for the space shuttle and space station, seven have been retired. Of the 11 remaining, seven are on the ground and can be rotated up to space as needed.

In 2017, NASA commissioned an internal audit of its surviving inventory of suits and the progress it’s making upgrading and replacing them. The findings were not good. “NASA will be challenged to continue to support [space station] needs with the current fleet of EMUs through 2024,” the report read, “a challenge that will escalate significantly if Station operations are extended to 2028.”

As with all things governmental, the issue comes down to money. And as with so many things NASA, the problem gets worse because of the ever-changing ways in which whatever funding the agency gets is spent. Over the course of four presidencies since 2004, the focus for crewed space exploration has changed repeatedly—from the space station, to the moon, to a mission to an asteroid, to Mars, and back to the moon. Different missions require different suits, and no sooner does NASA get started designing a suit for one purpose than it has to turn its attention to another.

“The Agency has … spent almost $200 million on three spacesuit development efforts to enable human exploration in deep space,” the auditors wrote, and yet “remains years away from having a flight-ready spacesuit capable of replacing the EMU.” If the next presidential administration changes NASA’s direction again, suit design will fall even further behind.

The astronauts themselves don’t have the luxury of considering such big-picture issues. They can only focus on the work that they’re doing in the ship that they’re flying in the suits that they’ve got. The cancellation of the first all-female spacewalk is a disappointment to be sure. But if the U.S. hopes to lead in space in the 21st century the way it did in the 20th, it’s got much bigger issues to address.

The original version of this story misstated the number of each size of spacesuit currently aboard the International Space Station. There are two extra large upper torsos, two large, and two medium, not two large and two medium. 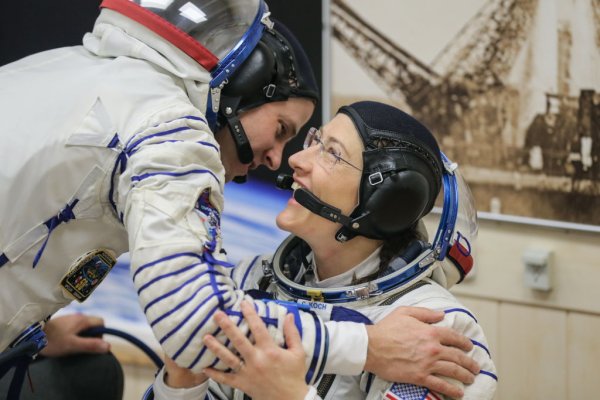 So Here's What NASA Has to Say About the Reaction to Cancelling the All-Female Spacewalk
Next Up: Editor's Pick