A pair of bufo toads crawl over moss on the edge of a small pond in Brandenburg, Germany on March 22, 2019.
Patrick Pleul—Picture-alliance/dpa/Getty Images
By Amy Gunia

Bufo toads, also known as cane toads, have come out in droves in Palm Beach Gardens on Florida’s East Coast. “You can’t even walk through the grass without stepping on one; they’re covering people’s driveway,” one homeowner told CBS Miami.

CBS News posted photos of the amphibians swarming a swimming pool and walkway:

Pest-removal expert Mark Holladay said it’s likely the toads have come out en masse to breed. He said rainy weather and warm temperatures in the region may have kicked off a breeding cycle, and anticipates more toads will likely emerge in the coming weeks.

Read More: An Alligator Went for a Swim in a Florida Family’s Pool

The toads, which can weigh over three pounds, have poison glands behind their eyes which release a toxin that can be deadly for pets who lick or eat the amphibians. The animals are also poisonous to humans if consumed, though deaths are rare.

Cane toads, which are native to South America, were first brought to Florida starting in the 1930’s in an attempt to tackle pests in sugar cane fields, according to the Conservancy of Southwest Florida.

The creatures are often attracted to human homes by garbage and pet food. 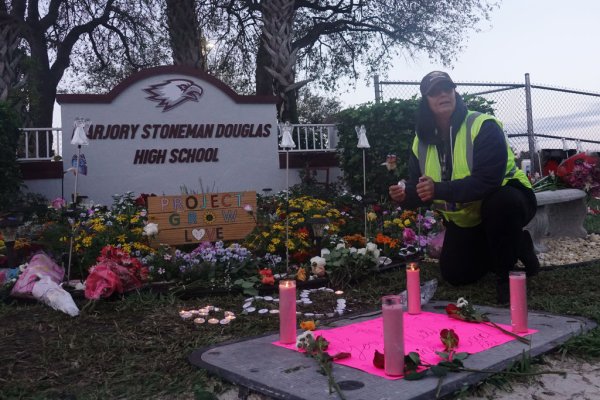 Another Parkland Student Has Died by Apparent Suicide
Next Up: Editor's Pick