A Hong Kong tourist has been charge after a hidden camera he allegedly concealed in a stick of deodorant was discovered at a Sydney hostel Monday night.

The camera was found by a 27-year-old French woman when she noticed the device shortly after showering, according to the New South Wales police. The woman reportedly took photos of the hidden camera peaking out of a deodorant in a toiletry bag on the sink before contacting the police.

When the man was searched, Australian police say they found the remnants of a smashed camera.

The 36 year old, who has not been named, also had numerous hard drives with him filled with videos of women that appear to have also been taken by secret cameras, the police report said.

Read More: The Activities of Hundreds of Hotel Guests in South Korea Have Been Live-Streamed Over Hidden Cameras

Both tourists were staying at a hostel on Lamrock Avenue near Sydney’s famous Bondi Beach. The woman checked in to the hostel on Sunday, and was allocated a room with the Hong Kong man, whom she did not know.

The man has been charged with installing devices to film others and possessing surveillance devices intended for unlawful use. He has been refused bail and is set to appear in court Tuesday, according to the police statement.

The case comes amid a wave of spycam crimes that involve cameras concealed in public places, like restrooms and hotels, that record people without their consent. Thousands of such voyeuristic cases were reported in South Korea last year, while incidents have also prompted arrests in the U.S., Hong Kong, Canada, and elsewhere. 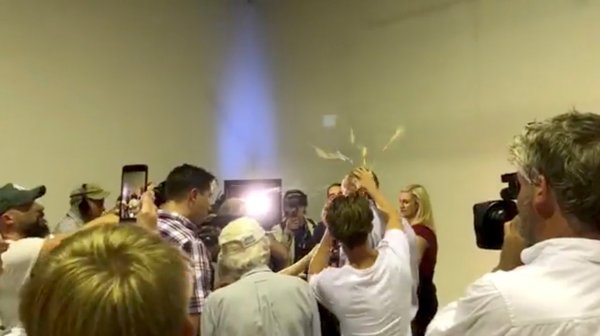 Australia: Fundraiser for 'Egg Boy' Raises Over $30,000
Next Up: Editor's Pick