The game between the Duke Blue Devils and the University of Central Florida Knights tips off in the second round of the 2019 NCAA Men's Basketball Tournament on March 24, 2019 in Columbia, South Carolina.
John Joyner—NCAA Photos/Getty Images
Ideas
By Taylor Branch

Branch, a Pulitzer Prize winner, is the author most recently of The King Years: Historic Moments in the Civil Rights Movement.

The annual March Madness heist is under way. Let’s take a peek behind the curtain: while the cameras show supremely gifted college athletes delivering drama and thrills on the court, the NCAA has licensed every television broadcast to hoard a bonanza for people who never touch the ball.

Well-meaning voices call for the NCAA to pay players, but this demand is misguided. No college should be required to pay athletes, and no pay structure needs to be planned. The central question is whether college athletes should have the bargaining rights that other Americans take for granted. On this point, the NCAA is deaf to persuasion. It will hang on to its windfall tenaciously.

The NCAA system is not a creation of law. It’s a private compact of colleges and their athletic conferences, designed to impose a compensation ceiling on athletes by fiat and to demonize anyone who pays or receives a nickel above essentially the cost of college attendance.

Basic reform is simple: just recognize the right of each athlete to bargain for the value of his or her work. This is not a radical notion. Roughly 14 million of 20 million U.S. undergraduates have jobs outside the classroom, and no one thinks to regulate or confiscate those earnings. Only the players in commercialized college sports are victimized as cash cows, to the tune of several billion dollars per year.

A fair, free-market college sports industry would evolve on its own once athletes have their rights restored. Some revenue would be diverted to those players as the essential core talent, which is only fair. What’s amazing is how long we’ve allowed them to be robbed.

Such a system would favor the same 60 to 100 schools that are dominant already. The major conferences may adopt differing, nonmonopoly standards for their athletic budgets, but the vast majority of athletes would not be affected. A volleyball player at a small college could seek compensation like anyone else, but negligible revenue would make such a request moot. Most college sports could remain amateur in the only true sense of the word, being pursued for love of the game and voluntarily divorced from commerce.

But while the solution may be simple, it won’t be easy. The NCAA constitution blocks athletes from membership while professing devotion to their welfare, and NCAA officials resist the danger of granting college athletes even “limited” rights. Under pressure, they have stuck to the claim of exclusive authority. Small benefits called reform, such as a “full scholarship package” — which includes free tuition and a stipend — shrewdly fall short of rights or independent representation for the athletes.

External forces will be needed to compel significant change, and there is precedent on several fronts. In 1978, spurred by Cold War competition over Olympic medals, Congress passed the Amateur Sports Act to empower active athletes by requiring they have at least 20% representation on each governing committee for U.S. Olympic teams. This small but revolutionary step soon dissolved draconian “amateur” rules that had enriched the AAU, then the NCAA’s biggest rival. Defying hysterical predictions, the compensation since negotiated by Olympic athletes has hardly destroyed worldwide audiences for the Games. A similar law requiring representation for college athletes could be effective, and deserves consideration, but Congress has shown no interest in bucking the college sports establishment.

The courts are another venue for justice. Several times they have struck down the NCAA system as an illegal restraint of trade. Until 1984, the NCAA asserted a sole power to license each college football broadcast. That power vanished overnight when the Supreme Court upheld a demand from the major football colleges, led by Georgia and Oklahoma, to schedule their own unlimited broadcasts. In the late 1990s, when an NCAA rule restricted certain new assistant coaches to a $16,000 annual salary, some 2,000 assistants banded to file an antitrust grievance that won them the freedom to bargain, plus a $54.5 million settlement. NCAA colleges promptly found ways to pay assistant coaches many times the old limit.

Judges have acknowledged the same legal reasoning in recent cases brought by current and former college athletes. U.S. District Judge Claudia Wilken recently ruled the NCAA compact a violation of antitrust law because it captures “extraordinary revenues” for member schools by confining players to compensation “not commensurate with the value that they create.” This is a restrained understatement, and courts have not yet granted athletes anything like the direct relief awarded to big football schools and the assistant coaches.

So far, the judiciary seems unwilling to confront the NCAA’s self-serving bromide that economic rights for college athletes would diminish their educational experience. In truth, compensation would give players an incentive to stay in school — and standing to bargain for better academic life. Beyond that, it remains up to the colleges whether they treat prime athletes as legitimate students.

Universities should be a forum for clarity about whether commercialized sports can coexist with academic integrity, but such debate rarely takes place at the institutions born for fearless thought. My alma mater, the University of North Carolina, temporarily canceled a pioneering course on NCAA history as too controversial. Sadly, most professors never examine the conflicted juggernaut right there on campus.

The burden of change may thus fall on athletes. Some have already begun raising their voices. A recent strike by the football team saw the University of Missouri’s president resign quickly, and the University of Maryland dismissed its football coach after players spoke out against him following a teammate’s death in practice. Even symbolic gestures in defiance of NCAA rules, such as wearing an armband or a small patch discreetly labeled something like “RFA” (Rights for Athletes), or selling autographs for charity at a public ceremony, could provoke spasms of attention that sports broadcasts zealously avoid. Truly concerted action could topple the NCAA.

I am cheering for UNC in March Madness as always, and I don’t expect to hear a word about equity for the players. Armchair experts and well-paid commentators will continue to obsess about bracketology, upsets, momentum and a key player’s sore ankle. This is natural, because sports are a designated world where fans escape to cheer and boo as they please. Intrusions from real life can break the spell, provoking resentful cries for pampered athletes to shut up and play.

Sports-think gives fans a presumptive stake to say how college sports should be run, oblivious that the whole NCAA production rests on players who have no voice at all. Athletes become urgently important for moments on the screen, but we force their fundamental rights to fit our entertainment and convenience. Surely this perspective is backward. College athletes are young adults who love a sport they have played all their lives. Some don’t realize how badly they have been used until they are leaving school, which helps perpetuate the exploitation.

Sparks of courage are needed. Fans, being also citizens, should engage the larger arena of fairness. Nonfans should stop wishing for commercial sports to vanish, as though Plato might rescue the academy, and address sports corruption and dishonesty at the heart of our vital universities. My hope for March Madness, now and in the future, is some small sign of agitation over basic rights. Regardless, I’ll chant, “Go Heels!” for Carolina and keep pushing for those armbands. 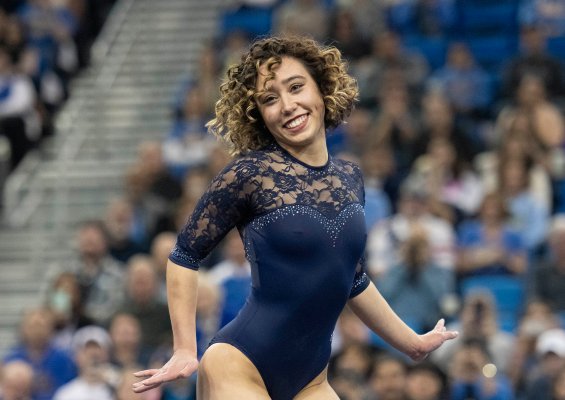 UCLA Gymnast Speaks Out About Cutting the Michael Jackson Music From the Floor Routine That Made Her a Star
Next Up: Editor's Pick