Luguentz Dort #0 of the Arizona State Sun Devils drives to the basket against Sedee Keita #0 of the St. John's Red Storm during the first half in the First Four of the 2019 NCAA Men's Basketball Tournament at UD Arena on March 20, 2019 in Dayton, Ohio.
Gregory Shamus—Getty Images
By Chris Wilson

March is not Mad. It is simply fickle. Whenever 64 teams gather for a single-elimination tournament, even trace amounts of entropy will resemble high drama and improbable returns.

In anticipation of this year’s NCAA March Madness hysteria, which comes on the heels of the maddest tournament in history in 2018, I approached the men’s basketball tournament with a time-honored palliative for neurotics everywhere: radical over-preparation. Instead of filling out a bracket, I wrote a computer program (open-sourced here) that generated 10 million unique NCAA brackets, randomly predicting each matchup with a modest weight toward the lower-seeded team. Here’s how it’s going:

After the first two rounds, which amounted to 48 games, a perfect bracket would have 64 points under a traditional scoring system: 1 point for each of the 32 first-round games and 2 points for the next 16. (Points double each round as the number of teams reduces by half, so the maximum is always 32). Five of my brackets have 61 points — on par with two brackets in ESPN’s pool that are tied for first place, according to the current leaderboard. Another 334 of my brackets missed a few first-round games but guessed the second round perfectly. (ESPN’s scores are inflated by a factor of 10 but are otherwise scored by the same system.)

Meanwhile, for the first time in documented bracket history, one entry in the NCAA’s official bracket challenge remains unblemished going in to the Sweet Sixteen, for the maximum 64 points thus far out of 192 total. If you were to choose a bracket by flipping a coin, the odds of pulling this off are 1 in 281 trillion.

I might overtake that particular bracket in the Sweet Sixteen, but I don’t expect to outperform the winner of ESPN’s challenge. For one thing, 17.2 million people entered ESPN’s contest. There’s surely a wide spread between those who carefully weighed a wealth of factors for each matchup and those who chose whichever school had a nicer logo. My program, meanwhile, was not endowed with any data other than the seeding of each team.

But it’s possible. What remains to be seen is whether, on the whole, a computer with less information can outperform, on average, 17.2 million people with varying amounts of information, much of which is clouded by loyalties, anecdotes, and the fact that many people just really hate Duke (which is still the most popular pick for champion in ESPN’s pool.) Every year, the graveyard of busted brackets balloons with more and more entries by both the unlucky and overly optimistic alumni.

Which is to say: Between the tournament, the NCAA selection committee, and the tens of millions of people who drop everything to follow every game–and, I suppose, me–who is actually the most Mad? 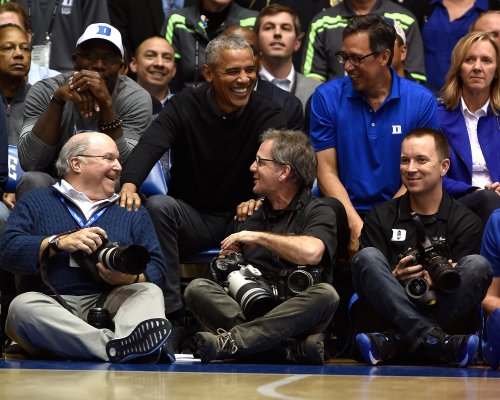 Obama Reveals His 2019 March Madness Picks
Next Up: Editor's Pick