Here Are All the TV Shows Coming to Apple's Streaming Service

On Monday, Apple previewed the first shows that will be coming to its new streaming service, Apple TV+, launching this fall. In a bid to compete with the likes of Hulu and Netflix, Apple will start producing its own content. The tech juggernaut has signed major talent, including Oprah Winfrey, J.J. Abrams, Reese Witherspoon and Steven Spielberg, to make television shows and films for this new service.

Apple invited some of these creators and stars to introduce these shows on stage. Actors, directors and producers previewed several other series in a highlight reel and a demonstration of how users will use the forthcoming television app on Apple devices. Apple boss Tim Cook said that Apple TV+ will launch in over 100 countries sometime this fall.

Here are all the shows Apple has confirmed will air on its streaming service.

Oprah Winfrey announced three new projects she is working on with Apple. The first two were documentaries that will stream on Apple TV+. One has the working title Toxic Labor and will focus on the damage of workplace harassment. The second is an unnamed multi-part series on mental health issues that are devastating lives across the world. Winfrey said that the goal of both shows is to “replace shame and stigma with honesty.”

In addition, Winfrey promised to revive a version of her talkshow, this time focused on books. In hopes of building “the biggest book club on the planet,” Apple will stream Winfrey’s conversations with authors.

Director Steven Spielberg will produce an anthology series inspired by a several fantastical stories he read in a magazine as a child. Each episode will be a new story. Spielberg offered up the plot of one episode: A World War II pilot whose plane magically travels from the past to the present day. He says by the end of the series, fans will be able to identify one uniting theme.

Reese Witherspoon, Jennifer Aniston and Steve Carell are teaming up for a drama that goes behind the scenes at a popular morning show. The actors said that the series will explore the power dynamics between men and women in morning news shows, both in front of the camera and behind it. Aniston even teased that the show would engaged in conversations about gender and the workplace “that people are too afraid to have.”

The Morning Show marks Aniston’s first time back on television since Friends, where Witherspoon guest-starred as her character Rachel’s sister. Kerry Ehrin (Bates Motel) will serve as showrunner.

Aquaman himself, Jason Momoa, and Alfre Woodard introduced a high-concept fantasy series from Steven Knight (Peaky Blinders). The show, which looks to have Game of Thrones-level ambitions, will take place on a version of Earth that was devastated by a virus. Only a few million people survived, and they all became blind in the process.

The series picks up centuries later when humans have rebuilt society around people’s inability to see. It’s even disputed whether sight ever even existed. The show will have the typical fantasy tropes of brave heroes, evil queens, but the actors said the story will challenge audiences to think about how much we depend on our senses.

Kumail Nanjiani will co-produce an anthology series with his wife and collaborator on The Big Sick, Emily Gordon, and Master of None co-creator Alan Yang. The stories in the show will be based on the true lives of American immigrants. “When people defend immigration, they focus on the exceptionality of immigrants,” he said during his presentation, citing Albert Einstein. This show will instead focus on immigrants living everyday life.

One episode will focus on a young Indian boy living in Utah whose parents run the motel until they were deported. The 12-year-old boy secretly ran the motel for 10 years on his own and even competed in the National Spelling Bee so he could ask Laura Bush for help.

The show will follow immigrants from Iran, Syria, Nigeria, Mexico and many other countries. Nanjiani also announced that the majority of writers and directors on the show are immigrants themselves or the children of immigrants.

Helpsters is a new pre-school show from the creators of Sesame Street. The show stars a group of new muppets that team children to solve problems and “change the world” using coding.

J.J. Abrams collaborates with singer Sara Bareilles on a drama based on the story of her own life. The romantic and comedic show about being a young woman starting out in the music business in New York City. Bareilles will compose the music, including the theme song, which she performed at the event.

Apple showed a few shots from this series from writer Ronald D. Moore (Battlestar Galactica) about a world in which the space race never ended. The series will star Joel Kinnaman.

Hailee Steinfeld will star as novelist Emily Dickinson in a 19th century coming-of-age story. Though Apple did not present about the series at the event Monday, they did show the first art from the show. Steinfeld was in the audience.

Though Octavia Spencer did not present onstage at the Apple event, she featured in the teaser about Apple TV+. The actor will star in an adaptation of the bestselling crime novel about a hit podcast that reopens a cold case and unravels the life of the show’s protagonist. Lizzy Caplan and Aaron Paul will also star in the series.

Shyamalan was among the directors highlighted in Apple’s promotional materials at the event. But Apple has kept the details of the thriller series, made by a man known for his twist endings, under wraps.

Actor Chris Evans arrives at the premiere of Fox Searchlight Pictures' 'Gifted' at Pacific Theaters at the Grove on April 4, 2017 in Los Angeles.
Emma McIntyre—Getty Images

After he finishes playing Captain America, Chris Evans is set to star in this thriller about a father whose 14-year-old son is accused of murder. Evans attended the Apple event.

My Glory Was I Had Such Friends

Though J.J. Abrams introduced the Sara Bareilles show for Apple, he remained mum on another series he’s set to produce. Abrams will reunite with Jennifer Garner for the first time since Alias for an adaptation of Amy Silverstein’s memoir of the same name. The show is about a woman waiting for a heart transplant.

Two of the It’s Always Sunny in Philadelphia stars are teaming up for a half-hour comedy series. McElhenney will star and write the series set in a video game development studio, while Day will produce.

Director Damien Chazelle during a photocall for the film "First Man" on August 29, 2018 prior to its premiere in competition at the 75th Venice Film Festival at Venice Lido.
Filippo Monteforte—AFP/Getty Images

La La Land director Damien Chazelle featured heavily in Apple’s promotional material for upcoming television shows, but the company did not announce what exactly he was working on.

MINNEAPOLIS, MN - MARCH 19: Kevin Durant #35 of the Golden State Warriors looks on against the Minnesota Timberwolves on March 19, 2019 at Target Center in Minneapolis, Minnesota. NOTE TO USER: User expressly acknowledges and agrees that, by downloading and or using this Photograph, user is consenting to the terms and conditions of the Getty Images License Agreement. Mandatory Copyright Notice: Copyright 2019 NBAE (Photo by David Sherman/NBAE via Getty Images)
David Sherman—NBAE/Getty Images

Kevin Durant will produce a show about AAU basketball inspired by his own experiences playing in the travel league as a kid. The drama will explore the dissonance between young players’ dreams to make it to the NBA and the corruption of the youth sports system. Brian Grazer and Ron Howard (who briefly appeared in a video during Apple’s presentation) will produce the series. Reggie Rock Bythewood (Shots Fired) will write and direct.

Thor: Ragnarok director Taika Waititi is reportedly creating a series based on the famous film.

The Captain Marvel actor will star in and produce a series based on the forthcoming memoir of former undercover C.I.A. operative Amaryllis Fox.

Sofia Coppola was featured in Apple’s presentation but didn’t offer any details on her project. The Lost in Translation director will reunite with Bill Murray for a movie about a woman (Rashida Jones) who reconnects with her father (Murray).

Apple will reportedly premiere a new Peanuts series, along with other content starring Snoopy that will try to get children interested in science, technology engineering and math.

Moonee is played with infectious childhood glee by Prince
A24

Brooklynn Prince, the star of The Florida Project, will act in a mystery series based on the true story of a young girl journalist named Hilde Lysiak. Jon M. Chu, director of Crazy Rich Asians, will direct and executive produce the series. 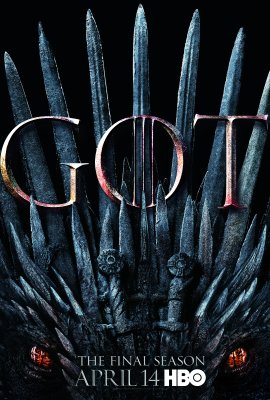 Clue Crackers Already Found the First Iron Throne in That Global Game of Thrones Challenge
Next Up: Editor's Pick