As all 1,373 passengers and crew members waited to be airlifted to safety off a heaving Norway cruise ship this past weekend, one California woman captured it all in a thread that went viral.

The Viking Sky ship ran into engine trouble on Norway’s frigid western coast as it traveled from the Scandinavian country’s Arctic north to the southern city of Stavanger on Saturday before the mayday call that forced a major evacuation that took place through Saturday night into Sunday morning.

Through all the turmoil aboard, passenger Alexus Sheppard was somehow able to pick up her phone and share live updates of the events as they unfolded from inside while the rocky vessel drifted off the churning coastal waters.

“It was frightening at first. And when the general alarm sounded, it became very real,” she told the Associated Press.

Huge waves crashed into the massive ship amid the turmoil, and broken glass on the ship cut hands and faces of fellow passengers. Viking Ocean Cruises said 20 people were injured, with one person in critical condition and eight others hospitalized. Norwegian officials said Monday they have opened an investigation into why the cruise ship set sail despite warnings.

Sheppard kept people abreast of all the dramatic developments at the first sign of issues. And in the videos she posted, you can see everything from a ceiling panel that came crashing down on one of her fellow passengers to the scene of the passengers waiting for rescue.

“We’re waiting for evacuation by helicopter,” she wrote in her tweet that began her series of videos.

Messaging through it all, Sheppard wrapped up her tweets by praising the human spirit that can triumph over a crises.

“Thank you EVERYONE for your love and support over these difficult two days. We’re now safely docked in Molda, Norway and have happily been fed and watered. It’s times like these that make us ALL stronger as caring human beings. It does indeed take a village.”

People marveled at her ability to keep her followers informed.

“Bless her multitasking heart like for real,” one fan wrote. 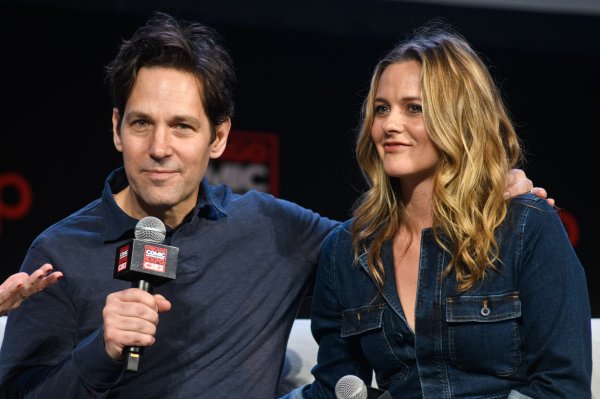 Paul Rudd Reveals the Secret Behind Being an Ageless Baby-Faced Adult Man
Next Up: Editor's Pick