Here's How the Mueller Report Is Playing in Russia

In Russia, the reaction to the results of Special Counsel Robert Mueller’s investigation into links between Moscow and President Donald Trump’s presidential campaign can be summed up in one phrase: “We knew it all along.”

“[It] proved what was known in Russia from the very beginning,” said Konstantin Kosachev, a senator in Russia’s upper house of the legislature, in a Facebook post on Monday.

Mueller’s long-awaited report concluded that neither Trump, nor anyone associated with his presidential campaign “conspired or knowingly coordinated” with Russia during the 2016 election, according to a summary released Sunday by Attorney General William Barr. Trump called the report as a “complete and total exoneration,” but Mueller pointedly did not absolve the president on allegations related to obstruction of justice.

The report also detailed the disinformation and social media campaign led by Russia’s Internet Research Agency during the 2016 election, as well as the Russian government’s hacking of Democratic Party officials and members of Hillary Clinton’s campaign.

Since becoming the Special Counsel for the Russia probe in 2017, Mueller compiled hundreds of pages of known court filings, demonstrating Moscow’s alleged plots to sow discord and help Trump win the presidency.

Throughout the investigation, Russian politicians and the state media have denied that the Kremlin interfered in the 2016 presidential election at all. And until Monday, there was limited coverage of the Mueller probe in the Russian mainstream media. Only occasionally was it referenced as an example of the U.S. government’s attempt to demonize Russia and undermine Trump.

Kremlin spokesman Dmitry Peskov responded on Monday, according to Russian state-owned TASS news agency: “We believe the accusations that continue to be made against Russia in terms of interference in the U.S. electoral processes are unfounded because even the brief information that is listed in the summary [of the Mueller report] has no basis.” He added: “It’s hard to find a black cat in a dark room, especially if it’s not there.”

Other officials have given a more heated response. Alexei Pushkov, chairman of the information committee at the Federation Council tweeted on Monday: “From the very start it was a biased, artificial, provocative, conspiratorial, designed-to-fuel-hatred towards Trump campaign. Its second goal was to demonize Russia and prevent any US moves towards better relations with Moscow.”

In the Russian media, some saw evidence of a battle yet to come. The editor-in-chief of the Kremlin-backed Russia Today (RT) news network Margarita Simonyan said, “Now [the U.S.] will say this: ‘There was no collusion, but Russia still interfered. On its own deceitful initiative.'”

One of Russia’s most popular TV networks, Channel One Russia, also wrote that “American political scientists say the report is not the end of the political struggle in the United States, but only the beginning of a new stage,” referring to a Fox News interview with Alan Dershowitz, a Harvard Law School professor who frequently defends Trump. The channel’s morning show implied that the U.S. media had been fanning hysteria about possible collusion in order to turn public opinion against Russia.

In Russia’s state-controlled news agency, RIA Novosti, journalist Ivan Danilov wrote that with the Ukrainian presidential elections approaching, the “most interesting is yet to come,” comparing American politics to a “skit” in a psychiatric hospital.

An op-ed by Kosachev, the Russian senator, in the state-controlled newspaper Novaya Gazeta argued that U.S. lawmakers knew “perfectly well” accusations of meddling were “a lie” but were buying time to impose “mass laws against Russia … And they succeeded.” 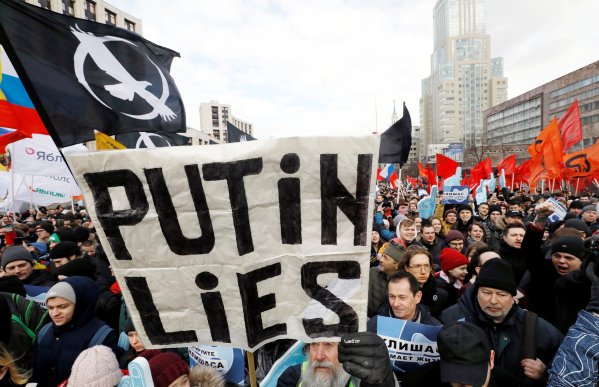 Russians Rally Against Plans for an "Online Iron Curtain"
Next Up: Editor's Pick