And from the looks of the lighting and costume design, New Jersey’s North Bergen High School put on quite the show.

They brought the film to life onstage for two nights only, Friday and Saturday.

That’s a short stint, but it was filled with enough dazzling visuals and a student-cut trailer that it’s made a lasting impression.

At the center of the spotlight of “Alien: The Play,” there’s a truly elaborate “xenomorph” costume that thrust the production into social media relevance.

The over-the-top extraterrestrial effects and sixteen students carried this show, which looks like it was sheer, exuberant fun.

After 17-year-old student and crew member Justin Pierson posted a thread on reddit, users quickly rocketed the thread up the ranks.

“My school did a play version of Alien. Here’s a picture from opening night last night,” he wrote.

Some celebrities are already clamoring for the treat to make the jump to Broadway.

And it all hews closely to its source in both spirit and style. “It follows exactly like the movie with a few scenes added to kill time for scene changes,” according to the thread.

Without having a front row seat to the performance, one thing is clear.

This is one scrappy team. Working with a shoestring budget, students constructed the iconic alien costume with a plastic skeleton purchased on sale and some donated foam.

The English teacher Perfecto Cuervo adapted the script from the movie and helmed the production as director while art teacher Steve Defendini oversaw the set designs and costumes.

Pop culture may have toasted the science fiction film before, but this might be the most charming example.

Even the official Twitter account for the original movie weighed in on the natural opportunity to comment on the fact that the cinematic masterpiece has managed to hold our attention for four decades.

“We are impressed! 40 years and still going strong…”

Online critics agree: It’s a smash. Judging from the enthusiastic response, this may not be the last we’ve seen of this rag tag team. 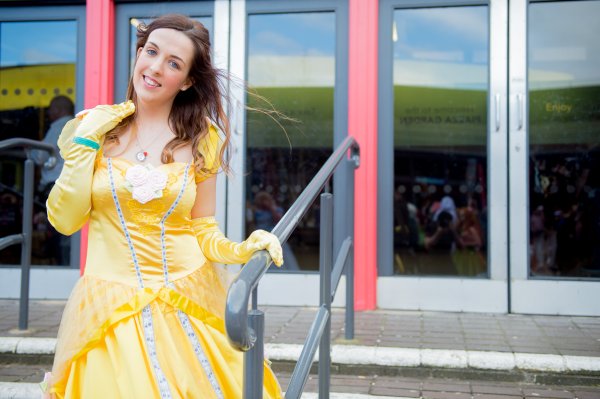 Couple Seeks a Strict Nanny Who Dresses Up Like Disney Princesses for $52,000
Next Up: Editor's Pick