William Barr Is Now the Sole Keeper of the Mueller Report. How He’ll Wield That Power Is a Mystery

Special counsel Robert Mueller has officially concluded his investigation after more than two years and turned his final report in to the Justice Department.

What happens next depends on one man: the attorney general, William Barr.

Justice Department rules now make Barr the sole keeper of the Mueller report. He alone decides what to do with it, including how much to make public and whether to pursue prosecution or other punitive measures based on Robert Mueller’s findings. Certain aspects of the report will have to be redacted, such as grand-jury materials, classified details and information related to ongoing investigations. But beyond that, Barr will have almost total discretion over what to share with the White House, Congress and the American people.

“I remain committed to as much transparency as possible, and I will keep you informed as to the status of my view,” Barr wrote in a letter to members of Congress on Friday.

How Barr will wield his extraordinary power is a mystery even at the highest levels of government. The White House is preparing different responses to the Mueller report, depending on what it contains and what they are allowed to see, a White House official tells TIME. As the head of the executive branch, President Donald Trump is Barr’s boss, so he, in the West Wing’s view, could request access to the full, un-redacted report. Others defending Trump, like the White House counsel’s office and Trump’s team of personal lawyers, would be entitled to a version of the report scrubbed of classified or sensitive information, argues the official. “The next steps are up to Attorney General Barr, and we look forward to the process taking its course,” White House press secretary Sarah Sanders said in a statement Friday. “The White House has not received or been briefed on the Special Counsel’s report.”

Trump aides are also gearing up for a fight if Barr tries to send anything damning about the President to Congress or the public. The White House believes that if a part of the report mentions people who have not been charged with crimes, it would violate Justice Department policy for those sections to be released, according to the official. So far, Trump has tried to project a sanguine front as he girds for Mueller’s report. “Let it come out,” the President said March 20. “Let people see it.” Most Americans agree: almost 90% of voters think the report should be made public, according to a CNN poll conducted from March 14-17.

Congress is preparing for battle as well. Under the special counsel regulations, Barr is only required to notify Congress of a few very narrow scenarios about the end of the investigation, including if he overrules Mueller on a decision. Beyond that, it’s up to him what to show lawmakers. It’s a very different situation than the one the nation faced in the 1990s, when independent counsel regulations mandated that Ken Starr send his report directly to Congress as well as to the attorney general. In congressional offices of both parties, a four-page memo from Congress’ nonpartisan internal think tank, the Congressional Research Service, has been making the rounds, explaining just how little disclosure Congress is entitled to. “All of this hinges on the Attorney General,” said one senior Senate Republican aide.

The first potential flashpoint between the legislative and executive branches of government is the fact that the White House may get access to whatever Barr decides to send to Congress before Congress itself, so that it can decide whether to assert executive privilege. Democrats are worried about how far Barr may defer to the White House on that score. “There has to be some reasonable opportunity to review and assert executive privilege, but it should be denied as much as possible,” says Delaware Sen. Chris Coons, a Democrat on the Judiciary Committee. “That’s where I think the ideological views of the Attorney General may have the greatest potential to threaten the transparency” of the report.

If any parts of the report or summary Congress receives are redacted, House committee chairs have already demanded they be given explanations for the reasoning. House Judiciary Chairman Jerrold Nadler, a New York Democrat, has suggested he and his colleagues could subpoena the full report or call Mueller to testify before Congress. The House voted unanimously this month for a resolution calling for any final report to be made public. “We’re going do everything in our legal legislative powers to compel them to release the documents,” says a House Democratic leadership aide.

Congress is conducting its own investigations into Trump and his orbit. But many Democrats have been waiting on Mueller’s findings to decide whether to initiate impeachment proceedings. Republicans, who control the Senate, are likewise anxious to see what Mueller has turned up. With impeachment potentially hanging in the balance, it becomes impossible to divorce ideology from politics. Whatever Barr decides to share with or withhold from Congress, for whatever reason, will have enormous consequences.

It is a mark of just how explosive the Mueller findings will be for both parties that they have been held so closely for so long. Barr and Mueller are old friends — Barr was Mueller’s boss from 1991 to 1993, during which time Barr served as George H.W. Bush’s Attorney General while Mueller was head of DOJ’s criminal division. But aides say Barr and Mueller haven’t been socializing in their current roles. Barr also left in place the existing oversight structure for Mueller’s investigation, with Deputy Attorney General Rod Rosenstein responsible for managing any interactions required between Mueller’s office and Main Justice on Pennsylvania Avenue. The overall effect has been to try to inoculate Mueller from some of the political heat surrounding his probe.

What’s clear is that Barr is about to make history. He alone will decide, based on his experience, beliefs and personality, how this consequential chapter of the Trump presidency unfolds. Even his closest aides recognize the power of the moment. “There’s a lot of things coming down the pike at us, there’s a lot of decisions that are going to need to be made,” admits one, “And it will be kind of viewed through the lens of how [Barr] handles things.” 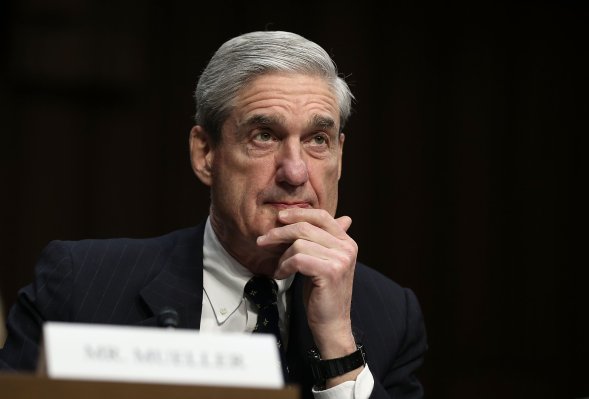