The Inextricable Role of Gender in the History of Fact-Checking

In 1965, as he neared completion on the first part of a corporate history of Time Inc., the writer Robert Elson showed a draft of his work to Patty Divver, who had started as a researcher at TIME in the early 1930s. She had a fairly major complaint: “I have one thing to say about that — and this as been my war with Time Incorporated — or was my war at Time Incorporated for 25 years. There is absolutely no awareness in the whole damned volume that women had anything to do with Time Incorporated!”

In fact, as Divver knew well, women had a lot to do with the company’s history. Notably, in the publication’s first decades, as TIME was creating the concept of the modern magazine fact-checker, women were almost exclusively responsible for that crucial work. At a moment when the fight against false information is a matter of global importance — so much so that the work now has its own annual observance, International Fact-Checking Day, marked on April 2 — it’s clearer than ever that the work fact-checkers do matters greatly.

Most of the women who worked at TIME in its early days held the job of “researcher,” a role that was inescapably entwined with gender. All of TIME’s researchers were women until 1973. On the one hand, the job offered opportunity, responsibility and a path to a career at a time when women were becoming a larger proportion of the gainfully employed. Researchers would work with the (usually male) writers to gather the necessary research material for an article. After it was written and edited, they would then confirm that every fact was correct as it was written. Researchers had unusual power in some ways; they were encouraged to talk back and to take an active part in reporting stories, though “women were completely and utterly unknown in U.S. industry,” as Divver later recalled.

But that the free rein wasn’t necessarily about empowering the women: it also fell into the old trope of a woman haranguing a put-upon man. A 1949 biography of TIME co-founder Briton Hadden posited that he saw the sometimes-tense dynamic between writer and researcher as an extension of natural competition between the sexes. Nancy Ford, TIME’s first researcher, who started in 1923, once recalled that Hadden would have her tell the printer about last-minute changes because, as he would say, “Hell! you’re a girl. They can’t kill you!”

And though Mary Fraser, the first real head of TIME’s research department, wrote years later that many of the employees were happy with the arrangement at the time, she believed that Hadden and co-founder Henry Luce saw “the girls” as responsible for office housekeeping, in addition to their actual work. “[There] was a very clearly drawn line between the writers and the researcher checkers,” she wrote in 1965, noting that Ford was essentially the organization’s “first Girl Friday” and left her job after a few months.

An unusual source on the perception of women in the workplace in the 1920s and ‘30s can be found in satirical poems written by Ed Kennedy, an editor at TIME and FORTUNE during that period. Turning his pen on everyone from the checkers to the top editors, he poked exaggerated fun at employees’ finicky habits and tendencies, and he was not above cashing in on sexist humor and stereotypes about women. For example, his poem “It’s a Fact” observes the punctilious ways of the female checkers when it came to book knowledge, while mocking their naivete in other areas, specifically sex. “For facts of this, for facts of that, / They spend their days in squawk and strife, / But they are not so expert at / Determining the Facts of Life.”

The 1944 Notes for Researchers (“By One of Them”) makes sure to declare its purpose. A small manual, only about 14 pages, it provides the “no less than 111 girls on TIME’s payroll” with matter-of-fact advice on how to deal with the flawed world reveals a stark view of the gendered roles: “Men need reminders just as much as the women. But don’t forget that a peculiarity of TIME Inc., and one that seems to be a matter of unending curiosity and frequent comment, is the woman researcher.” Indeed, they’re apparently so unusual as to be inherently subject to comment: “TIME Inc.’s researchers are conspicuous because they are women. That is why this pamphlet is being written for their benefit—particularly the benefit of the newer among them.” The pamphlet swiftly moves into suggested dress (“dignified, but feminine—neither girlie-girlie nor severely lady executive in design”) and continues on that theme of walking the tightrope of not being too much of any one thing, “intelligent (but not blue stocking), charming (but not giddy)…neither aggressive nor suppliant.”

In discussing how to handle someone who is unused to “having a girl interview him” the anonymous author notes: “A TIME Inc. researcher should never forget what a nuisance she can be merely because she is a woman…The researcher must prove, by her unspectacular behavior, that she is no more trouble than a man would have been.”

And those assumptions existed inside the company too. An undated questionnaire for basic biographical and work-related information, filled in by Mary Fraser, shows some flaws. Where the form reads “If you are married, your wife’s maiden name,” Fraser has manually changed the wording to “husband’s.” Elsewhere, she does more than tweak a question, writing, “Completely male questionnaire—we have about 300 women working here!”

In 1946 Henry Luce himself wrote to the head of research to suggest “the time may have come again for another ‘courtesy’ campaign among time researchers. And maybe it shouldn’t just be admonitions to be courteous. Perhaps a class out to be conducted on good manners over the telephone, how to write a thank you letter, etc. &etc. ” He closed the brief letter: “Some of our young ladies were no doubt too busy to study these manners at Vassar.”

Not mentioned in Luce’s note is the fact that, just around that time, the leading women of the research department were worried about something other than manners: they were involved in an unsuccessful campaign to have their work reflected better in their pay.

Fact-checking is certainly not the only profession in which history offers examples of a link between the gender of a worker and the way the work is valued — nor is it just a matter of history. In fact, coincidentally, April 2 is also Equal Pay Day in 2019. Though Fraser became the first female senior editor in 1942, decades would pass before a landmark action spurred TIME and other publications to promoting more of their qualified women into senior roles: a 1970 lawsuit brought by women working at Newsweek, which was followed by a complaint at TIME a few months later. As these high-profile cases prompted magazines to promote women into writing and editing jobs, fact-checking remained crucial but became less marked as a woman’s job. Some men soon would begin to trickle into the ranks of researcher-reporters, as TIME then called the fact-checking job.

But just because it took until the 1970s for that change to occur doesn’t mean the first women to be fact-checkers weren’t interested in advancement.

In the summer of 1946, a pair of publisher’s letters in TIME introduced readers to the research staff. After a previous piece about the magazine’s editors, these August 1946 missives reported that the results of surveying them showed “the composite TIME researcher is a neat 5 ft.-6in., 126-lb., 26-year-old unmarried blue-eyed brownette who is glad to state that she has worked hard enough during her year and nine months on TIME to lose an undisclosed number of pounds.” Though the piece about the editors had also included a set of physical averages, this one also continues on to say the researchers are “not too thin, not too fat,” noting that most of them are “just about right.” A follow-up piece noted that they attended concerts and plays and one struggled to get to the butcher’s before it closed. On average they smoked a pack of cigarettes a day.

And, it asked, “Is the TIME editor or writer, in general or in particular, your idea of what a man should be?” The answers ran the gamut there, but on another question the researchers surprised their bosses.

Asked what they would rather do than be a researcher, the writer apparently expected to hear about their wishes for calm domestic life. As the publisher explains, “about 85% of our researchers are unmarried, so we assumed…”

Rather, most wanted to be a writer, editor or correspondent. 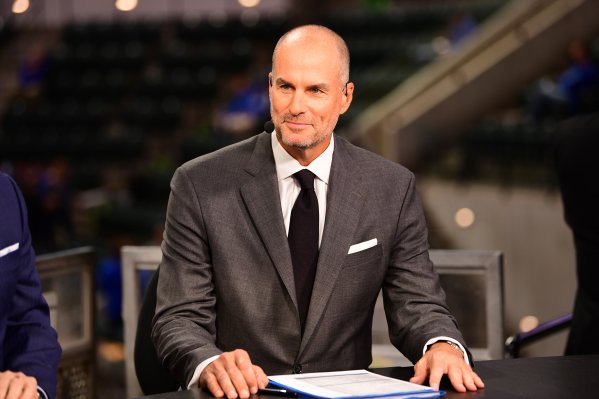 Broadcaster Jay Bilas Breaks Down March Madness and Any Qualms About Savoring it
Next Up: Editor's Pick