Ebola Was Confirmed in a Major City in the Congo, Stoking Concerns That the Outbreak Will Keep Spreading

Health workers are seen inside an Ebola treatment center in Butembo, which was attacked on March 9, 2019.
JOHN WESSELS—AFP/Getty Images
By Jamie Ducharme

A case of Ebola was confirmed in the populous Democratic Republic of Congo (DRC) city of Bunia this week, adding to fears that the outbreak there — already the second-worst in history — is far from over.

An infant who died in the Bunia health zone was confirmed this week to have the deadly, highly contagious hemorrhagic fever, according to the World Health Organization (WHO). The infant’s parents, however, appear to be in good health, raising questions as to how the baby may have been infected with Ebola.

Most Ebola cases have been recorded in the DRC’s North Kivu and Ituri provinces, in the northeastern part of the country. This is the first case to be confirmed in Bunia, which is located in the Ituri province and is one of the Congo’s largest cities.

“While investigations are ongoing to determine the source of the infection, teams in place have rapidly implemented response activities including contact tracing, vaccination and heightened surveillance,” the WHO says.

Though cases have not been confirmed outside the Congo, continuing geographic spread of Ebola, as well as security issues and conflict in the country, have made it difficult to contain the outbreak, which has sickened nearly 1,000 people and caused 600 deaths since it was officially declared last August. While WHO officials have said the Ebola response appears to be working and the outbreak could be contained by September, projections from Centers for Disease Control and Prevention Director Dr. Robert Redfield, who traveled to the Congo this month, were less optimistic. Redfield said it could take at least a year to get the outbreak under control, STAT reports.

Violence in the Congo, which is in the midst of a long-running humanitarian crisis, has made response efforts particularly difficult. The WHO blamed a recent uptick in cases on “security challenges” and “pockets of community mistrust” toward health workers and outsiders. Attacks on both response workers and treatment centers in the Congo have grown so common that Doctors Without Borders in February shut down a treatment center in the North Kivu city of Katwa, citing security concerns. U.S. government employees were pulled out of the Congo last summer, and have not been a major part of the response effort since.

Nonetheless, health workers continue to respond to new and existing cases of Ebola while attempting to curb its spread, particularly in high-infection areas such as North Kivu and Ituri provinces. Nearly 90,000 people in high-risk areas have received doses of an experimental Ebola vaccine, the WHO says, and treatment centers continue to accept infected patients.

Health officials have said only the West African Ebola outbreak, which killed around 11,000 people between 2014 and 2016, was more severe than the Congo’s current outbreak. 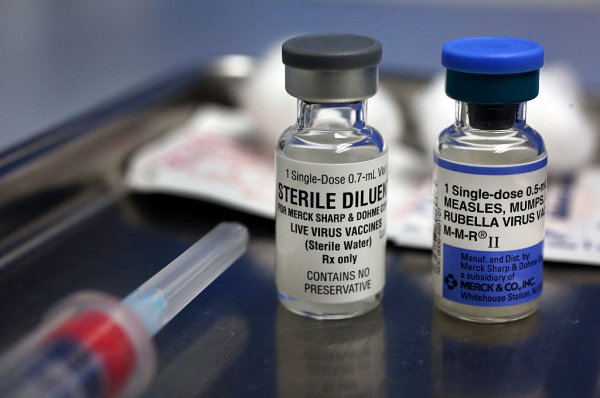 At Least 12 States Now Have Confirmed Measles Cases
Next Up: Editor's Pick