The True Story Behind the Movie Hotel Mumbai

On November 26, 2008, 10 young men in an inflatable dinghy came ashore in Mumbai, India, and slipped into the city undetected. They had been sent by Lashkar-e-Taiba, a Pakistani-based terrorist group. Armed with assault rifles, grenades and improvised explosive devices, they quickly fanned out across the city. Over the course of the next three days, the terrorists wreaked havoc, killing more than 170 people and bringing Mumbai to its knees.

Director Anthony Maras brings those horrific events to life in his new thriller Hotel Mumbai, which premiered last year at the Toronto International Film Festival and hits theaters March 22. Starring Dev Patel, Armie Hammer, and Nazanin Boniadi, the movie focuses on the stories of guests and staff trapped inside the Taj Mahal Palace Hotel for days as four armed terrorists stalk the halls, killing at random.

Hotel Mumbai’s filmmakers did an ambitious amount of research on the real attacks before filming. But as with many dramatizations of real events, Hotel Mumbai’s narrative diverges from history in some instances. TIME spoke with Maras to learn aspects of the film are drawn from fact and which have been altered for narrative purposes.

Did the siege of the hotel really last for days?

Throughout the film, guests and staff remain trapped in the hotel, stalked by murderous terrorists for days on end, as security forces remain outside. This depiction of events is pretty close to the reality of the situation during the chaotic days of Nov. 26 to 29, 2008. According to a RAND report, it took nearly 10 hours for India’s elite NSG commandos to arrive on the scene of the attacks in Mumbai, in part due to the fact that the country’s rapid-reaction force was based near Delhi, hundreds of miles away. In the meantime, civilians trapped in the Taj Hotel and other hostage situations around Mumbai were essentially left to fend for themselves. It wasn’t until the morning of Nov. 29 that counterterrorism operatives finally cleared the building and the siege of the Taj Hotel officially ended.

Is Dev Patel’s character, Arjun, based on a real person?

Arjun, a waiter caught in the midst of the attacks, is one of the film’s central characters. Over the course of the movie, he attempts to both keep his guests safe and make it back to his own family alive. According to Maras, Arjun is not a real person, though many of his actions in the film, such as telling guests at a restaurant to hide under tables and keep the lights off as the attackers storm the building, are based on real events. The character is actually an amalgam of two real people: a waiter in one of the Taj’s restaurants and an unarmed security guard who was able to help lead a pair of police officers to the hotel’s CCTV room in order to track the location of the four terrorists.

Are the hotel guests based on real people?

Zahra (Nazanin Boniadi) and David (Armie Hammer), a well-to-do couple, and Vasili (Jason Isaacs), a Russian businessman, are also at the center of the action in Hotel Mumbai. All of them are guests caught up in the attacks trying desperately to make it out alive. All three are fictionalized, although, like Arjun, many of their traits and actions are based on those of real people. According to Maras, Zahra and David’s characters are an amalgam of two different real couples caught in the attacks. One real-life couple inspired the scene in which Zahra and David are taken hostage by the terrorists, while the other was faced with a similar predicament to Zahra and David’s in the movie — deciding to split up during the attacks in order to give their young child a better chance of having at least one parent make it out alive. Vasili’s character, also fictionalized, is an amalgam of two people: a wealthy businessman and an ex-special forces operative who were both in the Taj during the attacks.

For Maras, the choice to fictionalize these characters seemed more respectful to the privacy of those who survived the attacks, as well as the memory of those who didn’t. “It’s something that we tried to approach with as much sensitivity as we could,” Maras tells TIME. “Obviously blood is spilled on the floor — people have died and there are very pronounced memories of these attacks.”

Who was Chef Hemant Oberoi?

The Taj Hotel’s executive chef, Hemant Oberoi (Anupam Kher), is another of Hotel Mumbai’s lead characters. Throughout the film, he remains remarkably calm during the crisis and does his best to keep his guests and staff safe. Oberoi is in fact a real person — he served as executive chef at the Taj for decades and is known as one of India’s premier cooking stars. For the filmmakers, keeping Oberoi’s biographical details intact wasn’t much of a choice; there was no way to fictionalize his iconic character. “Even though he might not be world-famous, he’s well known in India,” says Maras. “Everyone would have known who we were talking about.”

Did the Taj Staff actually make the sacrifices they make in the film?

One of Hotel Mumbai‘s central motifs is the bravery of the hotel staff, who go to extraordinary lengths to protect their guests. This selflessness is not an invention. Following the attacks, there were reports of kitchen employees literally standing in the way of bullets for their guests, and staff who, having escaped, chose to go back into the hotel to help guests get out.

“I simply couldn’t believe that you would have not one or two, but the entire staff of the Taj Hotel spontaneously, pretty much en masse, remain to protect their guests,” says Maras. “It was something I couldn’t get my head around. Who were these people and what drove them to do this?” Those acts of extreme bravery, he says, were a major part of his inspiration to make the film. 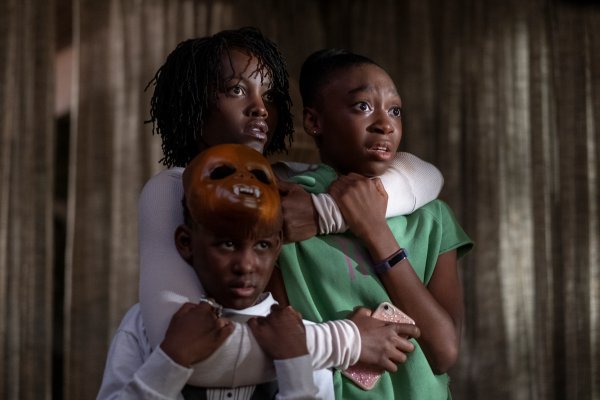 A Handy Guide to the Many Cultural References in Jordan Peele's Us
Next Up: Editor's Pick