In-flight meals that are actually enjoyable are few and far between. In part, that’s because ingredients often need to be shipped hundreds or thousands of miles from farms to airports, meaning sometimes they’re not exactly fresh. Singapore Airlines is aiming to change that with a “farm-to-plane” partnership announced Thursday with AeroFarms, a vertical indoor farming company.

At AeroFarms’ Newark, New Jersey headquarters, a variety of leafy greens are grown with only light, nutrients and oxygen — there’s no sunlight or soil to speak of. The operation, which TIME toured on Thursday, resembles a data center, but instead of racks upon racks of servers and other hardware, it has rows of plants in various stages of growth.

AeroFarms’ plants are grown atop a layer of cloth suspended over a chamber about the size of a small bathtub, into which nutrients are pumped. Instead of sunlight, the plants are exposed to LED light, the color of which can be changed depending on whatever’s best for a particular species. The company closely tracks the progress of each batch of plants, providing data that can help it refine the combination of light, nutrients, fertilizers and other factors involved. AeroFarms says its process uses 95% less water than typical farming, and doesn’t use pesticides or similar chemicals.

The company’s “aeroponics” approach, says co-founder and Chief Marketing Officer Marc Oshima, is 390 times more efficient in terms of land usage than an equivalent traditional farm. And because the indoor farm is temperature-controlled and protected from the elements, AeroFarms’ growing techniques can be highly customized. “It’s a type of control and precision you can’t ever get out in the field,” says Oshima. He adds that the Newark facility is the world’s largest indoor vertical farm.

It takes about 12-14 days for baby leafy greens to grow at AeroFarms’ facility, Oshima says, compared to 30-45 days at an average outdoor farm. That quicker growth means food can be grown and supplied faster. But it also allows for the kind of rapid prototyping more commonly seen in the software world — if AeroFarms wants to experiment with a different technique for a certain plant, it won’t take long for it to see the results and adjust as needed.

AeroFarms’ proximity to Newark Liberty International Airport, which serves the New York metro area, means that greens grown there can be on a Singapore Airlines passenger’s plate within hours of when they’re harvested, allowing for fresher and tastier meals. The airline hopes to have the first AeroFarms-grown food available on flights by September. Singapore Airlines’ culinary experts are particularly interested in AeroFarms’ bolder, spicer greens, which can help overcome passengers’ decreased senses of smell and taste in dried-out airplane cabins. (TIME enjoyed a taste test of those bolder, spicer greens and can report they’re also excellent while on terra firma.)

Singapore Airlines sees the AeroFarms partnership as a way to further differentiate itself in the crowded, commoditized aviation world. “Food is an area where we can stand out,” says Singapore Airlines VP of PR James Boyd. Some examples of potential Singapore Airlines menu items that could feature AeroFarms greens include soy poached chicken, a garden green salad, and heirloom tomato ceviche. (AeroFarms also sells greens to local grocery stores under the brand name Dream Greens.)

AeroFarms’ approach has benefits beyond fresher salads in first-class and coach. It’s also one potential solution to the problem of so-called “food deserts,” or areas that don’t have enough access to fresh, healthy foods. Some people have looked to rooftop farming as a fix for that problem in urban neighborhoods, but there’s only so much viable rooftop real estate in any given city. But indoor vertical farms like AeroFarms can make use of an entire building to produce food, echoing the way cities have built upwards over time when they run out of room to grow sideways. 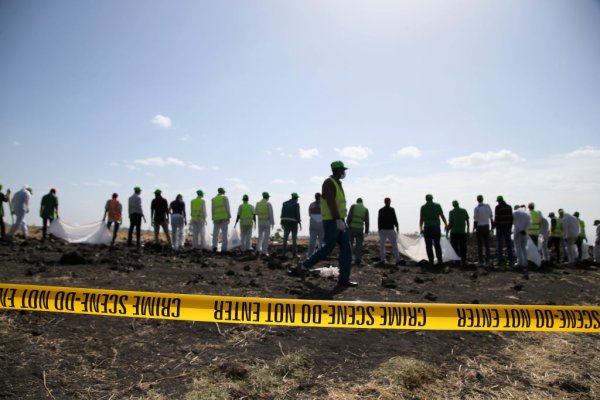 Ethiopian Airlines Denies Reports That Pilot in Boeing 737 MAX Crash Was Not Properly Trained
Next Up: Editor's Pick