Hamas Condemned After a Violent Crackdown on Protests in Gaza

An explosion caused by Israeli airstrikes is seen on Gaza City, early March 15, 2019, in response to a rare rocket attack on the Israeli city of Tel Aviv.
Abed Rahim Khatib—ZUMA
By Joseph Hincks

During Mid-March demonstrations against abject living conditions in the Gaza Strip, the Hamas-led government cracked down on residents of the 140-sq.-mi. enclave, prompting condemnation from human-rights organizations. As cell-phone footage circulated online showing security forces clubbing protesters, a U.N. envoy said March 17 that Gaza’s “long-suffering people” should have the right to express economic grievances without fear of reprisal.

“WE WANT TO LIVE”

The Islamist group Hamas has ruled the Gaza Strip since 2007, when it fought a brief civil war against the secular Fatah party. In the past, protests over living conditions and human rights have targeted the West Bank–based Fatah–which says Hamas beat up its spokesman in the March clashes–and Israel, whose 12-year air, land and sea blockade has strangled the Gazan economy. (Israel blames Gaza’s poverty on Hamas’ corruption and mismanagement.) The sustained “We want to live” protests, which began March 14, marked a rare challenge to Hamas leaders.

“REVOLT OF THE HUNGRY”

Under slogans like “Revolt of the hungry,” hundreds demonstrated against hikes in the prices of basic goods–devastating changes in a place where about half the 2 million residents live in poverty. Economists say the increases were driven by Hamas’ raising import taxes in a bid to revive Gaza’s collapsed economy. Authorities arrested dozens, raided homes and used live fire to disperse crowds, rights groups say. The U.N. voiced concern over the “brutal beating of journalists.”

March 14 separately saw the launch of two rockets fired from Gaza toward Tel Aviv–the first time the Israeli city has been targeted since 2014. In response, Israel’s military said, it struck 100 sites in Gaza but also agreed with Hamas that the rockets had been fired by mistake. Many had feared an even larger retaliation by Israel, but analysts said both sides worked to prevent escalation: Israel because it wants to avoid instability ahead of April 9 elections, and Hamas because it cannot afford to do otherwise. 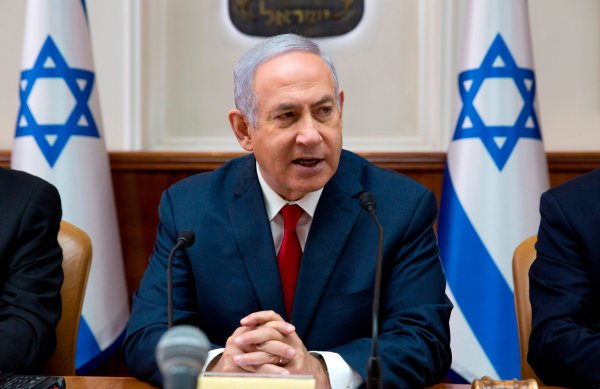 Netanyahu Is Facing Rare Criticism From Pro-Israel Groups Over His Pact With a Party Many Say Is 'Racist'
Next Up: Editor's Pick