Of Course Netflix's Mötley Crüe Biopic Is Silly and Sexist. What's Worse Is How It Tries to Get Serious

Let’s not kid ourselves: You don’t come to a Mötley Crüe biopic to see women respected, substances spurned or great minds collaborate on musical masterpieces. You come for the vicarious thrill of watching four inexplicably lucky dudes, each wearing his own weight in hairspray, rampage their way through 108 minutes of sex, drugs and riffs so big and dumb they’re timeless. The shame of it, at least for those who can still wring some enjoyment out of white men’s destructive exploits, is that Netflix’s Crüe movie barely even captures that nihilistic brand of fun.

Arriving on Netflix March 22, The Dirt is based on the notoriously bonkers 2001 autobiography of the same name that the L.A. pop-metal stars wrote with journalist Neil Strauss. Jeff Tremaine, one of the forces behind MTV’s Jackass empire, directs. All four Crüe members get co-producer credits, and the film comes with a soundtrack featuring four new songs by the band; in other words, this is a major marketing opportunity for an act that hasn’t put out an album of new material since 2008. So of course it tries to balance enough rock debauchery to satisfy viewers’ ids with a smattering of somber moments apparently designed to evoke sympathy for—and maybe preempt outrage toward—its cartoonish heroes.

After an opening set piece that surveys the booze, babes and messy public sex acts of a Sunset Strip party in 1981, The Dirt rewinds to bassist Nikki Sixx’s (Douglas Booth, a bit too pretty for the role) bleak ’60s childhood. He escapes his mom and her abusive boyfriends, only to be rejected by his estranged dad as a teen runaway; this supplies a neat explanation for his future heroin addiction. Everyone else gets a few humanizing details, too: The product of a loving suburban family, Sixx’s co-founder, drummer Tommy Lee (rapper Machine Gun Kelly acting under his given name, Colson Baker), is a romantic whose heart is always getting him into trouble. Frontman Vince Neil (Daniel Webber of The Punisher, in the strongest performance of the bunch) is touched by tragedy, first when his drunk driving gets a friend killed, then when his daughter is diagnosed with cancer. Often frustrated with his bandmates’ bad behavior, guitarist Mick Mars (Iwan Rheon, a.k.a. Game of Thrones’ sociopathic Ramsay Bolton) just wants to make it big while his chronic, degenerative form of arthritis still allows him to play.

Those character sketches have some potential, but a rise-fall-recovery arc straight out of Behind the Music (which aired its memorable Mötley Crüe episode in 1998) keeps the story confined to the realm of cliché. There’s the meet-cute: Tommy spots Nikki, already locally famous in the L.A. metal scene, and promptly ditches his date to chase destiny. There are brain-numbing interactions with interchangeable women. (“They say you’re gonna be a rockstar. Is it true?” a future girlfriend coos upon meeting Vince.) There’s starry-eyed talk of crafting “larger than life” personas and a first gig where a melee breaks out. With success comes the obligatory record-label dork (SNL’s own rockstar Pete Davidson), the groupies chasing after the band members, the lines of cocaine cut out on cymbals. The relentlessly silly script likens Nikki’s relationship with heroin to a risky romance—a Velvet Underground-era chestnut that was even stale in the ’80s.

Through it all, Tremaine’s efforts to juggle midnight-movie libertinism, fidelity to at least some of the facts and heightened #MeToo-era sensitivity toward the sexual transgressions of powerful men only create tonal dissonance. It’s obvious that all the female nudity and the coked-up capers are there for gratuitous titillation; that’s hardly worth getting upset about on its own. Even the unquestioned assumption that women exist either to be objectified or to scold comes with the hair-metal territory (though Tremaine could certainly try harder to disentangle his perspective on gender issues from that of the band).

What’s more disturbing is how all of the above coexists, context-free, with scenes like the one in which Tommy hits a fiancée. A passage from the book where Nikki tricks a woman into having sex with Tommy—an incident that has been rightly interpreted as sexual assault, and that Sixx now claims never happened—must have been too unflattering for the movie. At least in Strauss’ telling, that anecdote is enriched by Sixx’s retrospective realization that he’d done something inexcusable.

As pop culture reevaluates the lives of icons from bygone eras—something it’s increasingly fond of doing—fans need to acknowledge shifting social mores, our idols’ extensive flaws and our complicity in their abuses, all at once. And the artists who tell these stories are going to have to find ways to make the light and dark sides of these characters cohere. A subtler filmmaker might’ve ensured that The Dirt addressed the most alarming elements of the Crüe saga without robbing it of any trace of entertainment value. (My moot pick: Wayne’s World director Penelope Spheeris, whose 1988 documentary The Decline of Western Civilization Part II chronicled the Strip scene in all its mirth and misogyny.) Instead, Tremaine delivers a very authorized biography that poses even less of a challenge to the Mötley Crüe mythos than the book on which it’s based. 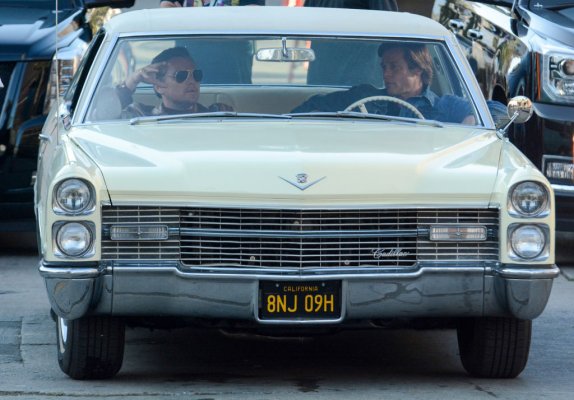 Watch the New Once Upon a Time in Hollywood Trailer
Next Up: Editor's Pick