The Secret Sauce Behind Apple's New AirPods? A New Chip, the Company Says

Continuing its week of surprise hardware announcements, Apple on Wednesday announced an updated version of its AirPods, the company’s wireless earbuds. While the second-generation model brings expected improvements like increased talk time, the kicker comes in the form of an optional wireless charging option that partially fulfills a two-year-old promise. The new AirPods also make it easier to go truly hands-free thanks to some updated internals.

Apple’s second-generation AirPods are largely unchanged on the outside, but ditches the company’s previous W1 processor in favor of a new chip called the H1. The new processor promises 50 percent more talk time, and allows the new AirPods switch from device to device up to twice as fast as the previous generation. The H1 chip also powers new hands-free Siri functionality, so you can get ahold of your virtual assistant by saying “Hey, Siri,” instead of tapping your ears like some kind of Secret Service agent.

“The first generation AirPods doesn’t have the internal chip plumbing to take Siri directly into the main [system on a chip], and so there’s a limitation that you have to physically interact with the device to cause that to happen,” Apple vice president of hardware engineering Kate Bergeron tells TIME. “With the new chip, we used the microphone in the device, and we’re basically able to plumb an entire system concurrently, and so we use some accelerometers that detect the acceleration of the bud and your voice at any time, and then can turn that entire engine on.”

Bergeron adds that the H1 chip is “optimized for wireless technology” and has less latency when used for casual iPhone gaming. Apple executives wouldn’t say whether the new chip will come to other headphones in Apple’s lineup, like the BeatsX, which shares the W1 chip found in the original AirPods.

Bergeron also said that using Siri with the new AirPods should eat up less battery life, and it should be easier for people to hear you on calls when you’re outside in the wind. The new AirPods advertise up to five hours of listening on a single charge, with three hours of talk time.

The new AirPods retain the same overall shape and design as the previous model, meaning if you had trouble getting a good fit with them, these won’t be any better. Greg Joswiak, Apple vice president of product marketing, tells TIME that Apple did extensive research into various ear shapes and other factors when designing AirPods’ predecessors, the wired EarPods. Apple, he says, went to work “studying hundreds of different ear types in order to come up with the design that would work across the broadest population of people, and I think we’ve achieved that better than anyone.” Still, there’s a thriving market for third-party accessories meant to help keep AirPods more secure in users’ ears, suggesting that one size doesn’t always fit all.

Though Apple is discontinuing the first-generation AirPods, its updated AirPods with a standard charging case will still have the same $159 price tag. The version with the wireless charging case will set you back $199. The wireless charging case is also available on its own for $79, and works with your first-generation AirPods, if you’re not looking to upgrade your buds themselves just yet. You can also get the case engraved, if you’re into that. No word of new color options, though. “We love the white,” says Joswiak when asked about any potential palette changes.

The AirPods update marks the third in just as many days to Apple’s product line, with its iPad and iMac lines receiving boosts in performance and other additional features. They also come a few days before Apple is hosting a major event at which it’s expected to announce its own live TV and streaming service.

But what of Apple’s wireless charging pad, the AirPower Mat it announced in 2017 and planned to launch in 2018? We might not have to wait much longer. 9to5Mac reported the appearance of code in an upcoming update to iOS that suggested support for wireless charging of multiple devices. “We’ve been pretty busy already, but we always keep people guessing,” says Joswiak when asked if Apple might make any more surprise announcements this week. Still, with all these updates coming right before its potential TV announcement, AirPower could very well could be the next big thing on Apple’s list. 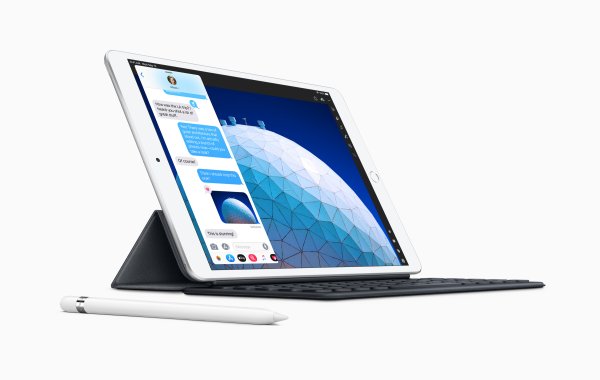 Apple's iPad Lineup Is Suddenly More Complicated Than Ever. Here's How to Pick
Next Up: Editor's Pick