Stadia, Google's Big Push Into Video Games, Could Change Everything About How We Play

Google has officially announced a major new effort in the video game world — and it might just change the future of the roughly $135 billion industry.

Speaking at the annual Games Development Conference (GDC) in San Francisco on Tuesday, Google CEO Sundar Pichai unveiled Stadia, a long-rumored cloud-based games streaming service. Unlike with a traditional video game console or computer, which processes a game locally as it’s being played, Stadia games are processed in the cloud, with the action beamed instantaneously to players over the Internet. Google promises a lag-free experience, as long as you have a fast enough Internet connection.

Launching sometime later this year, Stadia gamers play on devices they already own, with controllers they already own (though Google also announced its own Stadia controller). “There is no box,” Google Vice President Phil Harrison, a former Sony and Microsoft executive, said. “The data center is your platform.”

Google and partners made it clear that, with Stadia, Google is doing more than simply testing the deep waters of the video game industry. Rather, Stadia is a full-bore effort to fully compete in the industry in four big ways. With Stadia, Google is openly competing as a platform against the industry’s largest players: Microsoft, Sony and Nintendo. Thanks to close integration with Google’s YouTube, Stadia will also compete against massive streaming services like Twitch. It will go up against enormous games distribution juggernauts like Steam and the upstart Epic Games Store. Finally, the announcement of a new first party game studio potentially puts them in competition with other large publishers like EA and Activision Blizzard. And even if it fails, Stadia will most likely change the video game industry forever.

Stadia’s biggest impact will depend on how the largest console makers — Microsoft, Sony and Nintendo — will react to Stadia’s presence. The streaming service comes at a pivotal time in gaming. The PlayStation 4 and Xbox One are thought to be in their waning months as rumors and confirmations have swirled for the past year about the consoles’ official successors.

One facet that Google harped on over and over again for Stadia was its flexibility as a platform. It promised that it could grow with the changing times. When Google initiated Project Stream, which offered a limited number of players access to Assassin’s Creed: Odyssey through its Chrome browser on the day of the game’s launch, it said that it streamed the game at a resolution of up to 1080p and up to 60 frames per second. During Tuesday’s presentation, Google Vice President Majd Bakar said that Stadia, at launch, will support up to a 4K resolution, eventually with capabilities to output up to 8K and 120 frames a second.

Google said the disconnected nature of Stadia allows it to upgrade over time at the server level, rather than users needing to upgrade their own box. “We have built our platform to scale up with the infrastructure,” Bakar said.

Additionally, since the games will live on Google infrastructure, rather than individual home consoles, Harrison said that there wouldn’t be a need for downloads, updates or patches with the games on Stadia. “We wanted to reduce the friction between getting excited about a game and playing a game,” he said. “With Stadia, this waiting game will be a thing of the past.”

Sony’s CEO Kenichiro Yoshida and Xbox boss Phil Spencer have said that both companies are working on hardware for the future, which many believe will be released next year. The possible features of both boxes remain largely unknown, but if they lack the possibility of experiences like Stadia, Google may have already leapfrogged the competition before the next console generation cycle even begins. (Of course, it remains unclear how many top-tier games will be available on Stadia, and gamers tend to go where the good games are.)

Sony and Microsoft each have released platforms that directly stream games to consumers from their respective consoles — Sony rolled out PlayStation Now in 2014 and Microsoft announced Project xCloud last October. It’s clear both companies have long seen the writing on the wall of the future of consoles, but it’s unclear how far out they have built an infrastructure that could support a console-less future. Google’s existing data infrastructure and expertise could give the company a big advantage here.

“If you think about it, there are a lot of barriers for users to play high-end games,” Pichai said. “Beautiful graphics really need high-end consoles or PCs. And games don’t have instant access.”

Also in Google’s crosshairs: streaming services like Twitch. Google and partners showed off extensive integration between Stadia and YouTube. In one example, a viewer could be watching a stream of a multiplayer game, and join a live queue to play in the very same game as the streamer.

The Stadia controller, which pairs with whatever device is streaming Stadia over Wi-Fi, also is tied in directly into YouTube, featuring a dedicated button that sends whatever you’re playing to your YouTube profile.

Today’s presenters mentioned those who “love to watch games” as often as those who loved to play. It’s clear that Google has an eye out for the massive streaming market that has exploded in recent years.

The words “Stadia store” were only mentioned once by Harrison, without further elaboration, but it hinted that there would soon be a completely separate place from the traditional game marketplaces where players could buy their games.

Although Stadia games seem to be completely separate from the usual understanding of “PC games,” the fact that they will be playable on desktops and laptops appears likely to make this mysterious Stadia store a competitor to Steam.

Over the past several years, Steam has become a juggernaut for PC gamers and where the majority of games are purchased. That monopolistic hold over the medium was shaken late last year when Fortnite developer Epic Games announced the Epic Games Store, putting the most popular game in the world on it.

Stadia’s entry promises to turn the once-monolithic PC games market even more on its head. Google’s hefty presence has the possibility of upending how players think about PC games and where they are acquired.

Though the details were light, besides announcing its new head Jade Raymond, multiple game concepts designed in-house were shown.

It seemed as though the studio would vie for partnerships with other development studios, but create plenty of its own games as well. That could turn Google into an AAA games studio in competition with the likes of Activision and EA.

Win or lose, change is coming

Google’s presentation left an enormous number of questions unanswered, many of which Harrison promised to address this summer. Among the unknowns: Stadia will clearly require users to have speedy Internet connections, but access to high-speed broadband is unequal across the U.S. Google hasn’t announced a price for the service, either. And other companies (though none with the clout of Google) have tried and largely failed to offer a similar service.

Then there’s the matter of which games Stadia will offer. It’s a new platform, and developers haven’t had much time to create games for it yet. Id’s Doom Eternal and publisher/developer Ubisoft were mentioned during Google’s event, but gaming services can live or die on their launch titles. Still, Google’s decision to announce Stadia at the Game Developers Conference — to an audience largely made up of industry insiders and developers — was no doubt a strategic move to build excitement among the very people who will build the games that could potentially lift the platform to success.

“Today, our industry captivates over 2 billion players from all around the world,” Harrison said. “At the center of that community, its beating heart, are the game developers. The people in this room who create the most incredible game experiences that delight players with engrossing stories, characters and worlds through a dazzling display of technology, artistry and magic.”

Even if Google’s Stadia isn’t an immediate hit, it could change gaming forever. By promising a game-streaming future, free from download times and the need for lots of local processing power, Google has set the bar even higher for what future gamers will expect. The promise of “instant access” is a hope for many gamers, and it’s exactly what Google says is coming. The largest players in the game industry were surely watching today. If they weren’t already hard at work on the diversity, flexibility and performance that Google has promised, they certainly are now. 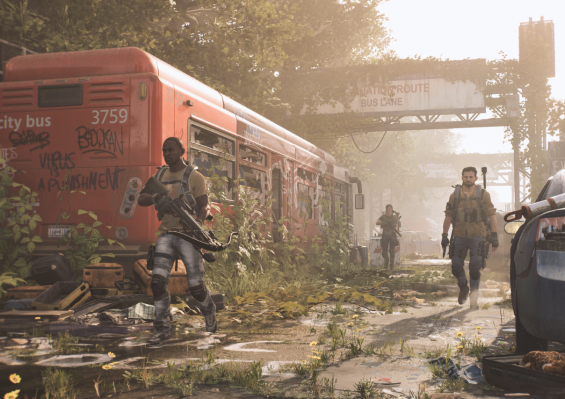 Review: The Division 2 Is a Worthy Successor With 1 Radical New Change
Next Up: Editor's Pick