The Meaning Behind 5 of the Most Popular Purim Traditions

This week, Jewish people around the world are preparing gift baskets and hamentaschen cookies to enjoy the celebration of Purim.

Purim, a holiday from the Jewish bible’s Scroll of Esther, tells the story of Esther, the wife of a Persian king who hid the fact that she was Jewish. As the story goes, Haman was a vizier (an adviser) to the king who wanted to exterminate the Jews in the Persian Empire.

“When the vizier went to the king, the king said, ‘do what you want to these people,” explains Jonathan Krasner, a professor of Jewish education and Judaic studies at Brandeis University. Esther had a decision to make: save herself and keep her religion hidden, or reveal herself in an attempt to save her people. She chose the latter. “The queen basically used an elaborate scheme to convince the king that the vizier was up to no good. The way that the story ends is that instead of the Jews being on the receiving end of the violence, the vizier was hanged and his sons were hanged and his evil plot was put down.”

Purim 2019 begins at sundown on Wednesday, March 20, and ends the following evening on Thursday, March 21.

How many days does Purim last?

The proper greeting for Purim

The annual street party in Tel Aviv on March 2, 2018, to celebrate Purim.
Michael Jacobs—Art in All of Us/Corbis/Getty Images

The proper greeting for people celebrating Purim is “happy Purim,” or chag Purim sameach in Hebrew. The phrase Chag sameach means “happy holiday” and can be used for any joyous Jewish holiday. But on Purim specifically, its usage is special, according to Krasner. “It certainly fits Purim very well because Purim is definitely one of the most happy, merry, joyful holidays on the Jewish calendar,” he tells TIME.

The holiday is so much fun because it truly is a celebration of family and community, Krasner says. A number of other Jewish holidays address much darker and more “grownup themes,” Krasner explains, which only makes the joy and fun of Purim more prevalent and important. “Many of the holidays are kind of heavy,” Krasner says. “Purim really stands out as a kind of frivolity, a time for joy, a time to let your hair down a little bit.”

How do you celebrate Purim?

As the holiday’s observance has evolved over centuries, Jews around the world have found different ways to celebrate. Though some customs are mandated by the Scroll of Esther, others have developed over time, Krasner explains. Here is the history behind the five most popular Purim traditions.

Israeli acrobats entertain the crowd in costumes during a parade celebrating the Jewish festival of Purim on March 01, 2010 in Holon near Tel Aviv.
JACK GUEZ—AFP/Getty Images

Traditionally, costumes and masks are worn to school, synagogue and carnivals on Purim. This is in part due to the notion of Esther concealing her true identity as a Jew out of fear, but it’s also a continuation of the way the story of Esther is “topsy-turvy,” according to Krasner. “The notion that everything is upside-down is very much a part of the tradition. Masquerading is something that’s been associated with Purim for hundreds of years,” he says.

But there’s more at play than the biblical story. Krasner says that there’s a bit of a debate in the academic community over whether the origins of Purim costumes and masks can be associated with Mardi Gras and the festival of Carnival, which occur in the same season as Purim and all involve masquerading in jovial fashion. With schedules tied to the vernal equinox and traditions so similar, Krasner says it’s hard to not draw the connection.

There’s little evidence of Jews masquerading on Purim until the medieval age, which coincides with a time when Jews and Christians were living close together for the first time. “It is very possible that Jews incorporated that tradition that was around them into their own celebration,” Krasner posits. But, he says, there’s no way to know for certain the level of influence these holidays had on one another. “The genesis of these things is somewhat hazy,” he explains.

The tradition of making Purim baskets, or baskets of food to give to friends and members of your community, has an origin that’s quite clear. Mishloach manot, or “sending portions,” is actually mandated biblically in the Scroll of Esther, Krasner says. The gift baskets typically include at least two different types of food, Krasner says.

Another tradition mandated by the story is charity, either in the form of a present or a donation. Both giving to the needy, called matanot l’evyonim, and giving Purim baskets are mitzvahs in Judaism, or commandments from God.

Another biblical commandment and mitzvah on Purim is actually the retelling of, and listening to, the story itself. Many people will go to services to hear a reading of the story on Purim. But since medieval times, a new tradition has risen to popularity: telling the story in the form of a play, farce or skit, Krasner says. The “Purim play,” known as the Purim shpiel in Yiddish, is another way to bring the community together during the holiday, according to Krasner.

“It’s a folk tradition that goes back at least about 500 years,” he says — and it’s also “a way of getting kids interested.”

People dress up as the characters from the story or dress up as pop culture figures to parody the story of Purim. “Again, it’s another way to have fun and make merry,” he explains.

Inside the Moscow Jewish Community Centre celebrating the feast of Purim on February 28, 2018.
Mikhail Tereshchenko/TASS

As with many religious holidays from all corners of the world, Purim is marked with a festival meal with friends, family and the community. The feast of Purim, held in the afternoon of the holiday, is mandated in the story, too, Krasner says.

Though many Jewish holidays are observed with similar meals, the Purim feast has a different feeling, Krasner says. For most major Jewish holidays, aside from Hanukkah, the meal begins with blessings over candles and wine. “[Purim] doesn’t have that kind of heft to it,” Krasner explains. The Purim festival meal serves as the hallmark of the holiday that’s all about unity, family and togetherness, according to Krasner.

“The story is about triumphing over adversity,” Krasner explains. After all, the plot of the Scroll of Esther itself hinges greatly on community. “According to the story, it was Esther’s willingness to stand up for her community that ensured that the community would be saved.”

A plate of hamentaschen cookies filled with poppyseeds.
Yula—Getty Images/iStockphoto

One of the most recognizable (and delicious) aspects of Purim is definitely baking and eating hamentaschen, the three-sided pastry that’s unique to the holiday. The reason you’re not likely to find these Purim cookies during another part of the year is because the cookie is a direct symbol of Haman, the antagonist in the story of Purim, Krasner explains. Not mandated in the bible, it’s another tradition for which an origin is difficult to point to, Krasner says.

The cookies are shaped in their triangular way to commemorate the hat that Haman wore, according to tradition. But, contrary to popular belief, Krasner clarifies that the Scroll of Esther does not assert any detail of Haman’s hat; rather, it is a folk story that’s been told for generations.

Baking and eating hamentaschen isn’t the only Purim tradition that focuses on the character of Haman. During services for the holiday, when the story is told and the name “Haman” is spoken or sung, people shout and use noisemaking instruments called groggers to prevent his name from being heard. That tradition is quite ancient, Krasner says.

The word hamentaschen is actually a medieval portmanteau of Haman’s name and the German word mohntaschen, which means “poppy seed pocket.” So, if poppyseed hamentaschen are your favorites, feel vindicated — you might call it the original cookie.

Of course, using poppyseeds is certainly not the only way to fill a hamentaschen cookie — chocolate, Nutella, apricot jam — the options are endless. The New York Times even ran a savory caramelized onion recipe of the Purim cookies this week.

Above all, the cultural importance of hamentaschen is largely due to the wide popularity of the taste. After all, with pastry dough and anything you want as the filling, what’s not to like? “You know, kids like them,” Krasner says. “Adults like them, too.” 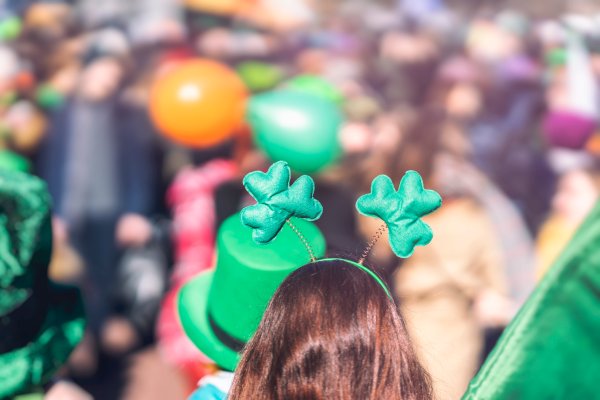 Shamrocks Are Everywhere on St. Patrick’s Day. Here’s How the Three-Leaf Clover Became a Symbol of All Things Irish
Next Up: Editor's Pick