President Donald Trump ramped up his attack on late Sen. John McCain Tuesday, bluntly escalating his unexpected feud with the maverick politician and prisoner of war who died seven months ago of brain cancer.

“I was never a fan of John McCain and I never will be,” Trump said in response to a question from a reporter in the Oval Office while sitting next to Brazilian President Jair Bolsonaro.

The president kicked off his latest round of attacks against the former Arizona senator on Saturday, when he tweeted about McCain’s alleged role in advancing the so-called Steele dossier, a document from British intelligence office Christopher Steele, that includes allegations of ties between Trump and the Russian government prior to the 2016 presidential election. Trump has repeatedly — and emphatically — dismissed the report as “fake” news, as he did again in Saturday’s tweet.

On Sunday, Trump went after McCain again, accusing him of sending “the Fake Dossier to the FBI and Media hoping to have it printed BEFORE the Election.”

(Contrary to Trump’s assertion, McCain did not receive the dossier until after the election, in December of 2017, according to the New York Times.)

Although Trump has sparred with McCain before — memorably disputing the former Navy officer’s status as a war hero, and noting that “I prefer people who weren’t captured” — this weekend’s tweets mark the first time Trump explicitly connected McCain to the controversial dossier.

The President’s tweets prompted a swift reaction from McCain’s daughter Meghan McCain, who responded on Twitter that “no one will ever love you the way they loved my father.”

The View co-host reiterated that opinion on the daytime talk show Monday, stating that Trump “will never be a great man.”

The President did not mention the Steele document specifically on Tuesday when he was asked why he was attacking McCain seven months after his death. Instead, Trump primarily criticized the late senator for not supporting his efforts to abolish Obamacare.

“I’m very unhappy that he didn’t repeal and replace Obamacare, as you know,” he replied in part, before conspicuously noting. “Plus, there are other things.” 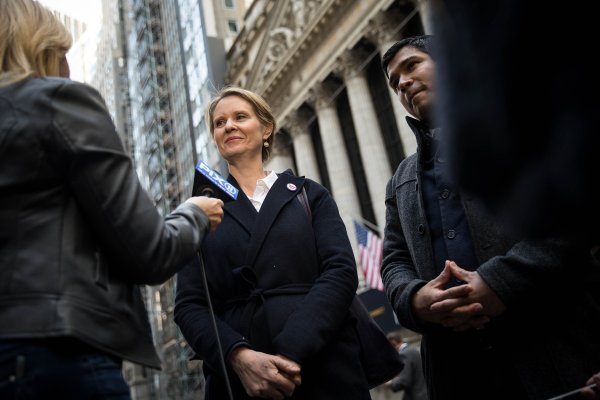 Cynthia Nixon: No Regrets About Running for Governor
Next Up: Editor's Pick