This Iranian Lawyer Saved My Life. Now We Must Save Hers

Shajarizadeh is a former Iranian political prisoner and women's rights leader who was freed by human rights lawyer Nasrin Sotoudeh. She is a Senior Fellow at the Raoul Wallenberg Centre for Human Rights.

The lawyer who saved my life was just sentenced to 38 years in prison and 148 lashes in Iran.

I first met Nasrin Sotoudeh — an internationally renowned human rights lawyer, and our country’s foremost campaigner for women’s rights and against child executions — when I was being harassed and violently intimidated by Iran’s intelligence services. My crime? I had removed my headscarf in public and put the video online, in protest of Iran’s forced hijab law and the stifling control over women’s bodies and choices that it represents.

I finally felt empowered, being part of this White Wednesday movement in Iran, where every Wednesday women would courageously defy the regime in removing their headscarves, or wearing a white shawl in support of those who did, and which quickly grew into a near daily event. I was an ordinary woman, partaking in an extraordinary movement.

For this, I would go on to be arrested a total of three times last year. I was beaten and brutalized in prison, my only breaks from the psychological torture of solitary confinement. It was the most frightening experience of my life — not just the pain — but that I felt so alone, suffering in solitude.

But then Nasrin showed up. She told me that my struggle is her struggle — the struggle of all Iranian women — that I am not alone, and that she would not relent until I am free. Knowing Nasrin was there for me gave me solace and sustained me through it all. She courageously protested, spoke to the media, and navigated the complex and opaque Iranian legal system on my behalf.

After my third arrest and imprisonment for removing my headscarf, I was told by Iranian Intelligence that when (rather than if) I’m convicted I would never see my 8-year-old son Barbad again. They had already detained Barbad with me the last time; seeing him in handcuffs broke my heart. So when Nasrin got me out on bail, I immediately fled the country with my son, and my trial proceeded without me. Nasrin informed me that throughout the trial, the judge refused to hear my side and had already made his mind up. My fate was predetermined, as it had been for so many of the women who stood trial before me. However, unlike those women — and thanks to Nasrin — I was safely outside the country with my son when my 20-year sentence was handed down. Today, I live in exile in Canada, where I am seeking asylum.

As dramatic and draconian an outcome it may seem, Nasrin was unsurprised, given her experience representing human rights defenders in Iran. She had understood that such cases could not be won in the courthouse, but only in the court of public opinion. That is why she revealed my prosecutor’s name to the press and exposed his record of repression, demonstrating that he was more a persecutor than a prosecutor.

Nasrin was then herself arrested in June, three days after representing me at my trial. This persecutor had sought his revenge, and filed a criminal complaint against her for her courageous conduct in my case. Intelligence officers showed up unannounced at her home and brought her to the notorious Evin prison in Tehran. While her initial arrest was based on the complaint of the prosecutor in my case, once they had her in detention, further false and fantastical charges were added.

Among her charges were membership in human rights organizations and women’s rights activism, for which she was accused of “propaganda against the state” and “encouraging prostitution.” She was also accused of “appearing at the judiciary without Islamic hijab.” It is true that Nasrin has attended court without a headscarf, in an expression of solidarity with me. It is also true that she is a member of human rights organizations, including groups united in defense of women’s rights, persecuted minorities, political prisoners, peace, and against capital punishment. But these realities attest to her virtues, not crimes.

Nasrin’s trial was conducted in absentia and did not respect any basic rights to a fair trial. Now she is facing a sentence of 38 years in prison and 148 lashes.

Protestor holds a sign saying 'No to Mandatory Hijab' as hundreds of Canadians take part in a protest against the Islamic Republic of Iran in Toronto, Ontario, Canada, on January 6, 2018.
Creative Touch Imaging Ltd.—NurPhoto via Getty Images

On Saturday March 9, in honor of International Women’s Day, I marched for Nasrin alongside thousands of women of all cultures and creeds in Canada, where I currently live. I was in awe as they raised their voices freely, without fear. For now, we can hardly dream of such marches in Iran.

I looked back on my first White Wednesday in Iran, when my heart beat faster than it ever has and remembered the shadow of fear cast by the authorities. I was struck by the contrast with my new home. I am now surrounded by women who feel free to be themselves; that day, I marveled at how we marched together in solidarity and sisterhood. I felt grateful not only to be free, but for the ability to assemble and protest for those who are not.

When I was in prison, Nasrin was my only hope. She did everything in her power to liberate me. I’m only able to raise my voice freely today because of her tireless advocacy on my behalf.

That’s who she is — Nasrin cannot remain silent in the face of injustice. And neither should we.

While countries were quick to condemn her imprisonment — with the U.S., U.K., E.U., France, and Canada issuing statements — only a day after news of Nasrin’s conviction broke, they outrageously allowed Iran to assume leadership in the U.N. Commission on the Status of Women, where it will now oversee all allegations of abuses against women. Not only does this protect the impunity that allows for Nasrin’s unjust imprisonment, but it effectively rewards Iran for it. Their silence at the U.N. speaks louder than their statements for Nasrin, and abandons her and other women to the terrors of Tehran’s torturers.

The world must instead send a clear message: Iran will not be treated as an equal member of the international community if it does not treat women as equal members of humanity. They certainly must not be allowed to lead in these institutions, so long as women leaders like Nasrin languish in prison. Countries should use their clout at the U.N. and other international organizations to pass resolutions calling for Nasrin’s release, and remove and block Iran from leadership positions until it does so.

Nasrin should be the one occupying international positions of leadership on women’s rights, which she had promoted so effectively in Iran. France’s President Macron recognized this in appointing her to the G7 Advisory Council on Gender Equality, sending a personal letter to Iranian authorities expressing the esteem in which he holds her. Other G7 leaders — such as Germany’s Angela Merkel, and Canada’s Justin Trudeau, the founder of this Council — should do the same. Whether from governments or the grassroots, civil service or civil society, other international groups should similarly send Nasrin a public invitation to play a role in their work. Not only could they benefit from her wisdom, as I did, but they could offer her lifesaving attention and protective cover from her jailers.

We all know who these jailers are. We will never forget the names of those who arrested, prosecuted, sentenced, and tortured us. Nor will we forget those who instructed them to do it. These individuals should not be allowed to travel and enjoy the freedoms abroad that they deprive Iranian women of at home. Democracies should use Global Magnitsky laws to issue targeted sanctions against these officials who are abusing human rights. We and can start with those involved in Nasrin’s unjust imprisonment.

But our most powerful tool is freedom, which remains out of reach for so many around the world, and especially for Nasrin, despite her dedicating her life to protecting it. We must use our freedom to help Nasrin secure hers. Whether on Twitter, Facebook, or Instagram, or in public protests and petitions, we must be her voice.

In doing so, we will give Nasrin the lifesaving message she had given me, and so many others: you are not alone. 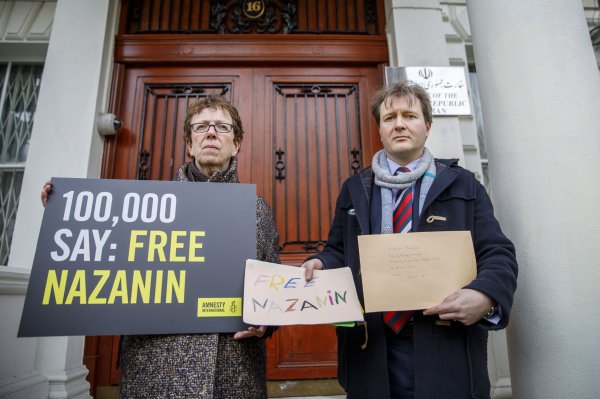