Venezuelan Opposition Take Over Diplomatic Offices in the U.S.

Representatives of Venezuelan opposition leader Juan Guaidó said Monday they had seized three diplomatic properties in the U.S. previously used by the government of President Nicolás Maduro, as the two men continue their tug of war over the South American country.

Carlos Vecchio, Guaidó’s main envoy in the U.S, told reporters in Washington that they had taken control of two defense buildings in the city and one consular building in New York, adding that they expected to take over the Venezuelan embassy in Washington “in the coming days.”

Guaidó has been locked in a stand-off with Maduro since January 23, when he launched a claim on the presidency, saying Maduro’s second term, won in rigged elections last year amid a sprawling economic, political and humanitarian crisis, is illegitimate. Guaidó’s supporters say that, as head of Venezuela’s parliament, the constitution mandates that he take charge if there is a power vacuum in Venezuela. More than 50 countries, including the U.S., have recognized Guaidó as Venezuela’s legitimate leader and he has appointed a parallel government, including overseas diplomats.

Maduro retains the support of key allies Russia and China, as well as of the Venezuelan military.

On Twitter Guaidó said that the aim of taking over the diplomatic properties was to “strengthen bilateral relations [with the U.S.] and to better serve the Venezuelan community in the country.”

Venezuela’s embassy and consulates in the U.S. have been closed to the public since January, when Maduro broke off relations with the U.S. in the wake of the Trump administration’s recognition of Guaidó as president.

In Washington, Vecchio removed a portrait of Nicolás Maduro from one building, replacing it with one of Guaidó. In New York, Guaidó’s representatives removed locks from the doors of the consulate and hung a sign in the window reading “Soon we will open the doors of this consulate. So that all of us can return home,” according to CNN footage.

In a statement, the Venezuelan Foreign Ministry said it “denounces the forced occupation of its headquarters by people […] who are acting as agents of the U.S., in favor of its political interests” and called on the U.S. government to “fulfil their legal obligations and take necessary measures to undo the occupation.”

The U.S. pulled their remaining diplomatic personnel out of Venezuela last week, following widespread blackouts in the country, which Maduro blamed on a U.S. cyber attack. 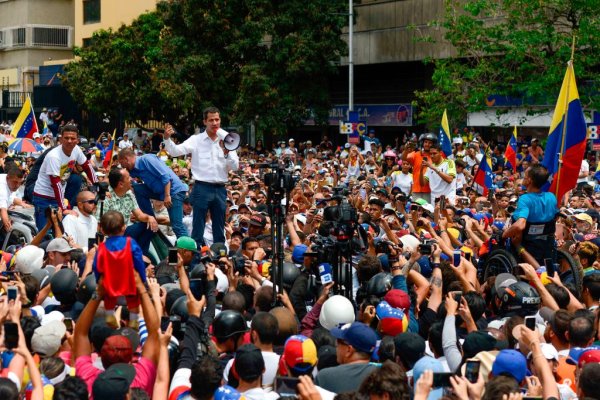 Venezuelans Rally in the Streets of Caracas Amid Power Outage
Next Up: Editor's Pick