Social media users in China are coming together to support a woman who was asked to remove her goth makeup by subway staff earlier in March.

The unnamed woman posted on the Chinese social media platform Sina Weibo that subway staff told her she would need to take off her makeup if she wanted to ride the train, reports the BBC. The incident occurred in the southern Chinese city of Guangzhou.

“A female security guard called her manager, and said that my make-up was ‘problematic and really horrible’,” the woman said on Sina Weibo, reports the BBC. “I’m hoping to use this relatively public platform to challenge the authorities: what laws grant you the right to stop me and waste my time?” she added.

Since the woman posted about her encounter on social media, it has been shared more than 5,000 times, according to the BBC, and thousands of others have posted pictures of themselves in heavy makeup, many using the hashtag #ASelfieForTheGuangzhouMetro.

“I’m on the bus; please hand me the makeup remover,” the BBC reports that one user posted.

China Daily reports that a security guard has been suspended for her handling of the situation. She will reportedly receive remedial training. “Guangzhou Metro apologizes publicly to the victimized passenger and to netizens, and will try to further improve its work and management to provide even better service,” Guangzhou Metro said on its WeChat account, China Daily reports. 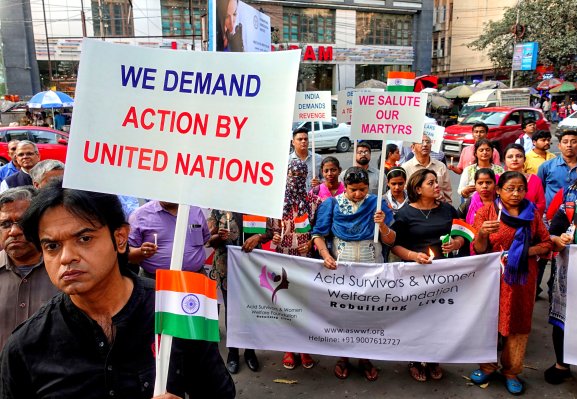 China Blocks U.N. Attempt to Blacklist a Pakistani Militant
Next Up: Editor's Pick