Severe flooding in the Midwest caused by heavy rain and snowmelt has damaged hundreds of homes and left at least three people dead, as water covered farm land and an Air Force base along the Missouri River.

About 200 miles of levees in Nebraska, Iowa, Missouri and Kansas were compromised, contributing to the flooding, the Associated Press reported. Nebraska Gov. Pete Ricketts described it as “the most devastating flooding we’ve probably ever had in our state’s history.”

Three people from Nebraska were killed in incidents involving rising waters, and two men from Nebraska have been missing since Thursday, according to the AP.

“The majority of the levee system along the Missouri River, south of Omaha, continues to deteriorate and is compromised,” Col. John Hudson, Omaha District Commander for the U.S. Army Corps of Engineers, said in a statement Sunday. “The bulk of the levees remain overtopped or breached.

“The duration of flood water impacts is still unknown at this time. I want to encourage residents to continue to monitor the situation and keep in close contact with their local and state emergency management organizations to stay updated on any evacuation plans and emergency conditions,” he said.

The National Weather Service said “major to historic river flooding is forecast to persist for portions of the Missouri and Mississippi River Basins as snowmelt continues over areas that received heavy rainfall last week.”

Parts of Illinois and North Dakota are also bracing for major flooding in coming days.

Vice President Mike Pence is scheduled to travel to Nebraska on Tuesday to survey the flood damage with the governors of Nebraska and Iowa, White House Press Secretary Sarah Sanders said in a tweet.

Before and after images reveal the extent of the devastating flood damage: 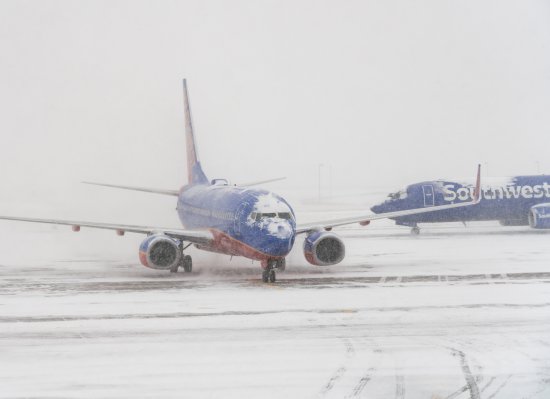 What to Know About 'Bomb Cyclone' Hitting U.S.
Next Up: Editor's Pick